What a director looks for in a cinematographer’s showreel.

The first thing a cinematographer should understand is that most directors don't fully understand cinematography. Though they may talk the talk, they may not know a lot and are not always willing to admit that they don't know. So when they look at something on a showreel, they sometimes don't know how it was achieved. This can work to a cinematographer's advantage.

Reels for Cinematographers - An Agent's Perspective 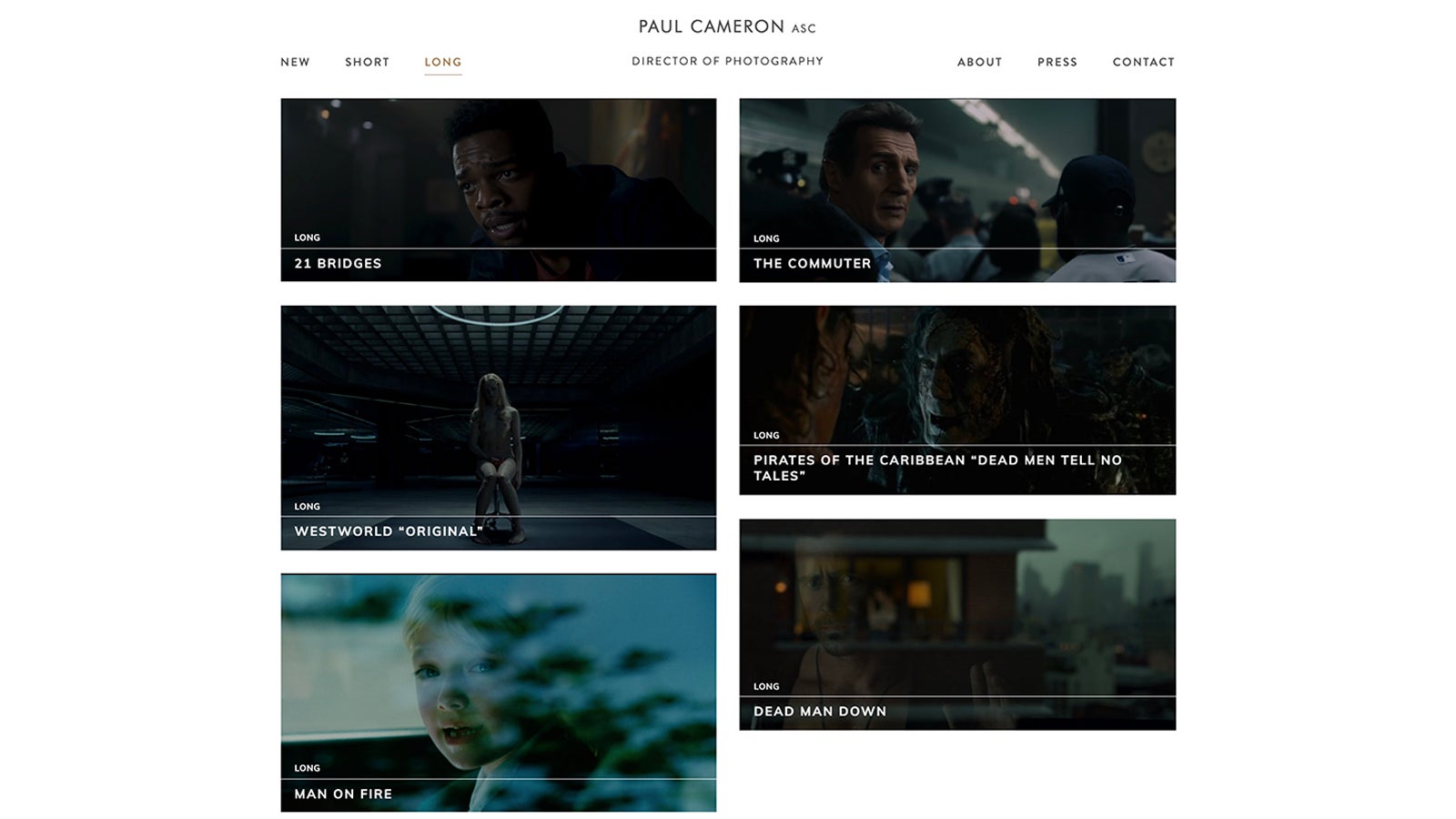 If a director is undertaking a project that involves visual techniques that the director hasn't utilized before, they will take considerable comfort in seeing those techniques on a cinematographer's reel. The last thing they will want to admit to their employer, be it an independent production company or a film studio, is that they lack technical expertise. So one of the first things they will look for on a cinematographer's reel are those things about which they lack confidence. The cinematographer can be, they hope, their secret spirit guide.

Working with known film stars can be another thorny area for directors early in their careers. Actors are more amicable than most people outside the industry imagine, but they still need to be treated, and spoken to, in particular ways that best facilitate their performance, and this can be daunting. The neophyte director sometimes worries their cast will eat them whole. They certainly aren't going to admit this to their employers. So, they need a secret alliance with a cinematographer who has the experience with actors that they don't. If you have that experience, you should put it on your showreel.  But be careful. No one is impressed with someone who is too easily impressed.

Frame from "In the Dark" season 2, DP Bradford Lipson

Directors know that the reel is meant to show the cinematographer's best and most important work. If on that reel "B" or "C" list actors repeatedly appear, it's as if the cinematographer is saying they are impressed by these formerly great, or not yet well known, or completely fallen actors. That is not going to help them get employed. A director might think that the cinematographer doesn't understand quality, even if acting isn't, and isn't meant to be, their area of expertise. Don't do it.

Less can be more when the quality of what remains is high. I would rather see one shot of an important actor at the top of their game than twenty shots of unknown or formerly known actors. There is an inclination among cinematographers to simply want to fill up time to make their reel longer. That isn't a good idea.

What else should go on a reel? Surprisingly, directors aren't always comfortable with their understanding of what coverage and blocking is necessary for a scene. They understand the theory but not always the nuance of complex techniques. They may be insecure about the use of close-ups, or wide shots, or crane shots. Or they may know how to do them, but they are not always certain when they should be used. So, I encourage cinematographers to include a few whole sequences on their reels so the director can see that the cinematographer knows how to block a sequence.

We all work in an industry that relies on smoke and mirrors. Cinematographers sometimes forget that directors are themselves masters of these deceptions; they know how, for example, to use editing and music to elicit reactions from an audience. 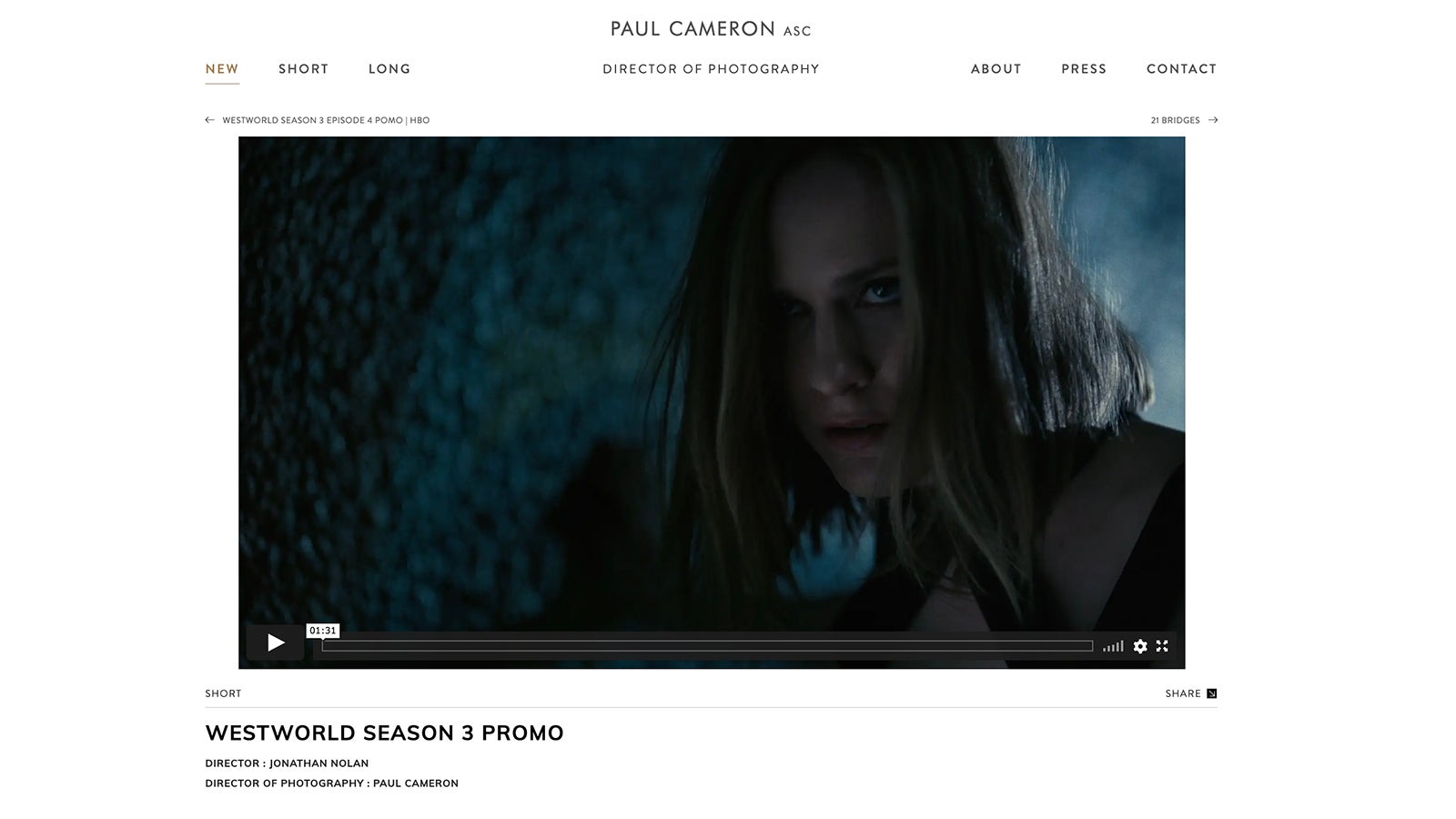 The limitations of montage reels

As a cinematographer, you are trying to sell your substance with your reel, not your ability to deceive, and certainly not your ability as an editor or a selector of cool music. Directors won’t be impressed. I know that montages are much favoured by many cinematographers on their reels, but montages leave me cold. Seeing a shot completely out of context, that is only on screen for one or two seconds, accompanied by loud bass driven music and followed with twenty other shots in an editorial potpourri, tells me very little about the cinematographer; except perhaps they are hiding how little substantive material they really have.

If the object of the reel is to show the width and breadth of a cinematographer’s work, then they should separate out each film they are showing, they should show several shots from that film, (some of which should be sequential), and then put a title at the corner or bottom of the screen to indicate which film the material comes from. A director is not going to be flipping between a cinematographer's resume and what is on-screen. Make it simple for them. Busy directors are going to give each cinematographer's reel a brief look and be making judgments very quickly.

If you have already shot a successful film, make sure you clearly label it on screen. Just like the inclusion of successful actors on your reel is important, showing that you shot successful films in the past is also going to help you. Association with success has an almost mystical quality in the film business. Directors have a habit of hiring people who have already had some level of success. If you have, let them know.

Directors also admire the work of certain other directors. When you put interesting sequences on your reel, you may also want to put the name of the director who directed the sequence if they are known or admired. It's the equivalent of a high-level recommendation. 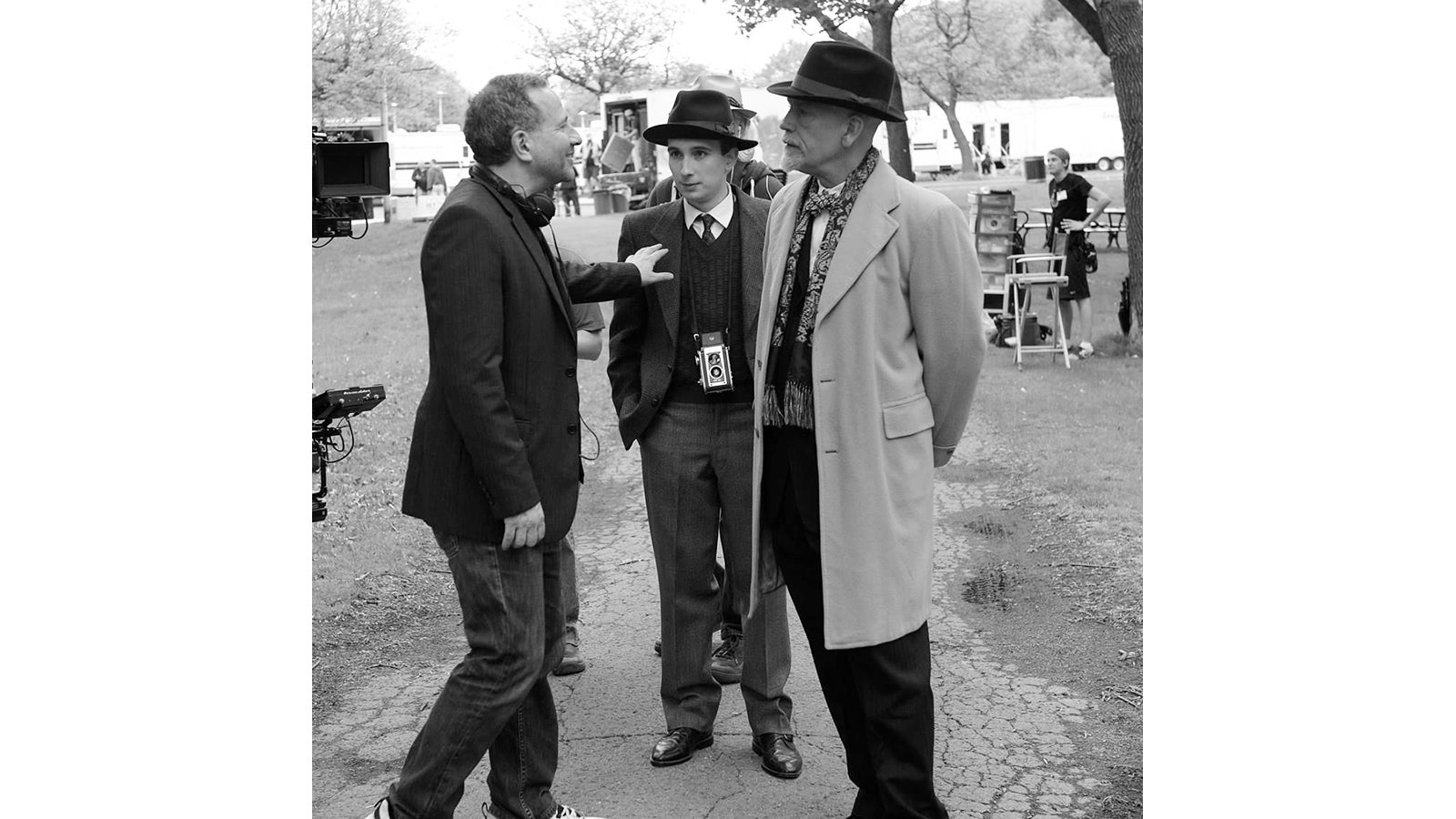 Visual effects are another area of some anxiety for less experienced directors. They know that if visual effects are not believable, their film can fail. If a director isn't familiar with visual effects technology, they can be intimidated. There will usually be an effects supervisor on set, but the cinematographer is an important part of the effects equation, and it's a good idea to demonstrate acumen shooting complex visual effects on a reel if you have that experience.

The most difficult thing about creating a reel is that there are certain types of directors and producers who only look for material that resembles that which they think they need to produce themselves for the upcoming film. So if they are making a comedy, they will look for comedy on the cinematographer's reel; if they are making an action film, they will look for action sequences, a romance, romantic sequences, and so on.

This is hard on the cinematographer because inevitably, they will be offered films of a variety of types, and it is impossible to have all those types on a reel. I suggest that given a choice, the cinematographer puts material on their reel which is technically difficult. Although the creation of a successful comedy is more difficult visually than people imagine, it still doesn't carry the prestige of a big action sequence. So, when in doubt, include those things with the greatest production value and hope that reason will prevail; that the director will believe if you can do the hard things, you can do the easier things.

Sadly, this isn't always true. The more insecure a director, the more specific they will want your reel. So, I would say if you as a cinematographer very much want a particular job of a particular type, there is nothing wrong with re-editing your reel for that specific job. It might be something you have to do in a hurry, but it might just get you the job. I have done it and it can be worthwhile.

The technical quality of your reel is also very important. It can be frustrating because studios and big production companies don't always provide the master material to the cinematographer to create the best possible images. Instead, you might have to work with something that is relatively low resolution. It may not bother you on first viewing, and it may seem fine to everyone else who views your reel, but when you see your reel with its lower resolution up against a cinematographer's reel who managed to get hold of the master material, the differences are profound. Fight like mad to get the best material. 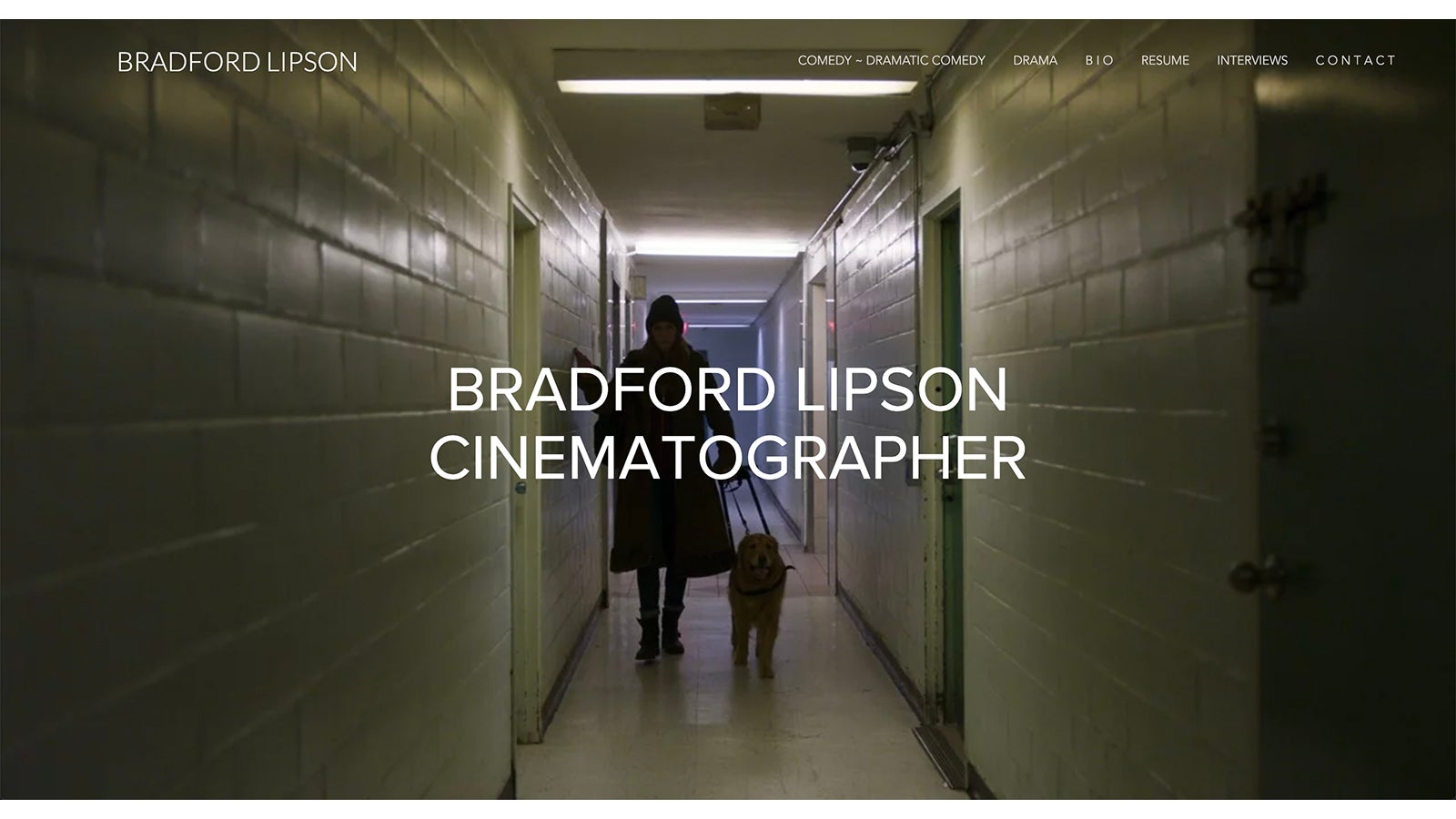 It's also surprising to me that cinematographers will spend weeks in color timing for their feature films but will then try to do the color grading themselves on their reels. It's amazing when I see overly sharp resolution, supersaturated colors, and all those other elements that look like cheesy video rather than fine, painterly cinematography. Your agents and friends might tell you that experienced directors will be able to decipher good work. That is misguided. A director's reaction is immediate and visceral and very often not intellectual. You have to present your work in its best possible form. Hire a professional colorist in a DI suite. It’s worth it, even if it only gets you a single job.

Some cinematographers set up complex menu options on their reels, which theoretically allows directors to navigate through the material to find the things they are looking for. This is great in theory but not in practice. I don't mind a cinematographer having a separate part of their reel with longer sequences from their most prestigious films, and that can be on some other menu option but, simplicity is the order of the day.

Frankly, most directors are going to have a pile of reels, and they're going to motor through them at speed. Simple, clean material of high technical quality with recognizable faces (who are currently significant), is the most likely to get attention and get you work.

Finally, if you have little experience, don't worry. But don't overreach. Personally, I would rather watch a very, very short reel with some really nice shots that leave me wondering what else that cinematographer can do. Sometimes, on commercials, I might give someone with less experience a try if I like their reel. But as I say above, never fill your reel up to show how "much" you have done. We directors aren't interested in "much"; we are interested in quality.