Is it Possible to Shoot Anamorphic on the PXW-FX9?

The simple answer as to whether one can shoot anamorphic on the FX9 or not is no, one cannot. The FX9, certainly to start with, will not have an anamorphic mode and it’s unknown whether it ever will. I certainly wouldn’t count on it ever getting one (but who knows, perhaps if we keep asking for it we will get it).

But just because a camera does not have a dedicated anamorphic mode doesn’t mean we can’t shoot anamorphic. The main thing we won’t have is de-squeeze. So the image will be distorted and stretched in the viewfinder. But most external monitors now have anamorphic de-squeeze so this is not a huge deal and easy enough to work around. 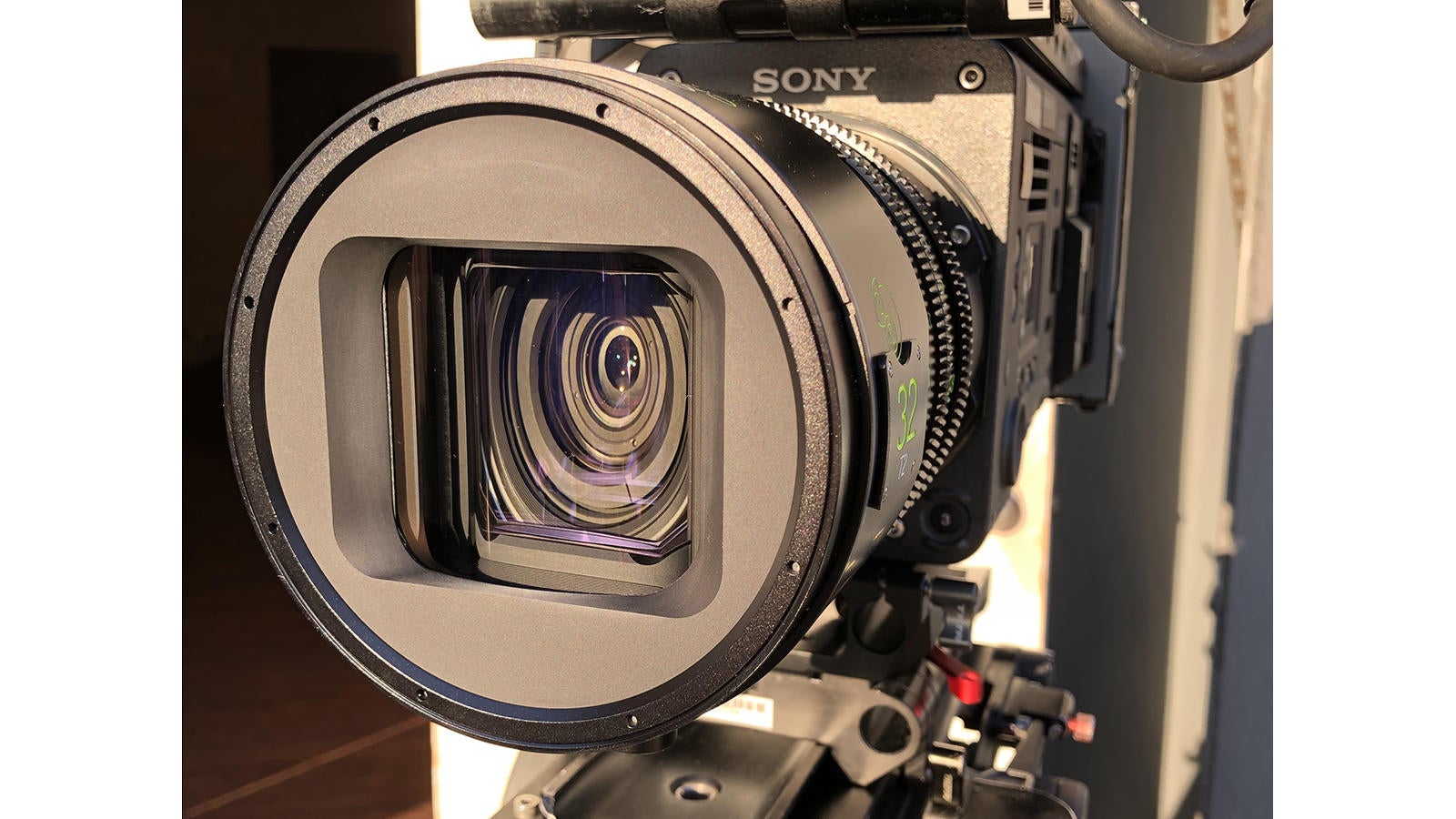 It’s worth looking at shooting 2x Anamorphic on the Sony F5 and F55 cameras. These cameras have 17:9 sensors, so they are not ideal for 2x Anamorphic. However the cameras do have a dedicated Anamorphic mode. When shooting with a 2x Anamorphic lens because the 17:9 F55 sensor, like most s35mm sensors, is not tall enough, after de-squeezing we end up with a very narrow 3.55:1 aspect ratio. To avoid this very narrow final aspect ratio, once we have de-squeezed the image we need to crop the sides of the image by around 0.7x and then expand the cropped image to fill the frame. This not only reduces the resolution of the final output but also of the usable field of view. But even with the resolution reduction as a result of the crop and zoom, it was still argued that because the F55 starts from a 4K sensor that this was roughly the equivalent of Arri’s open gate 3.4K. However the loss of field of view still presents a problem for many productions.

In comparison the Arri 35mm 4:3 open gate sensor in area is 28mm x 18.1mm and we know this works very well with 2x Anamorphic lenses as this mimics the size of a full size 35mm cine film frame. The important bit here is the height – 18.1mm with the Arri open gate and 18.8mm for the FX9 in Full Frame Scan Mode. 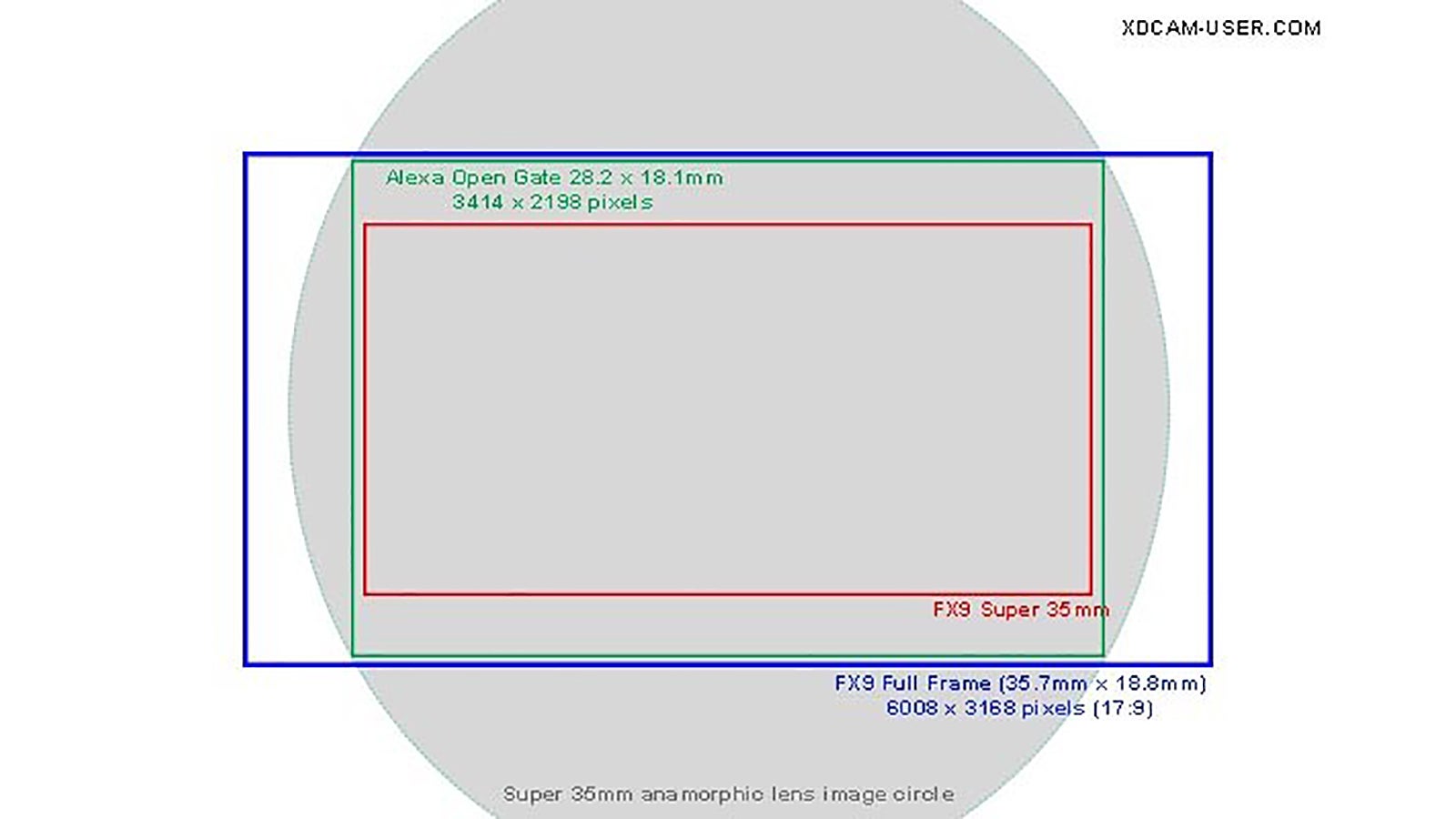 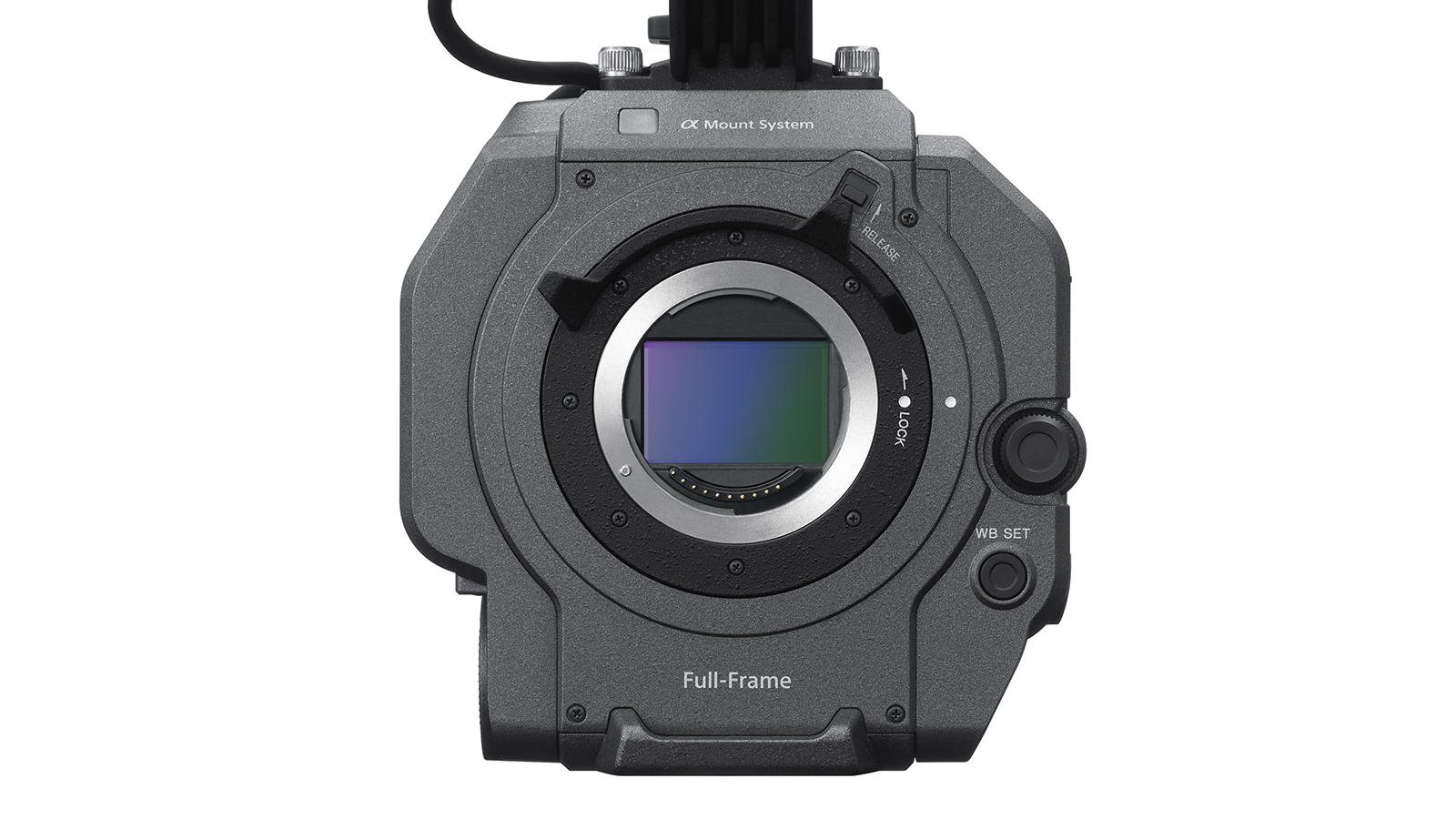 If we do the math – start with the FX9 in FF mode and use a s35mm 2x anamorphic lens.

Because the image is 6K subsampled to 4K the resulting recording will have 4K resolution.

But we will need to crop the sides of the final recording by roughly 30% to remove the left/right vignette caused by using an anamorphic lens designed for 35mm movie film (the exact amount of crop will depend on the lens). This then results is a 2.8K-ish resolution image depending upon how much we need to crop.

This doesn’t seem very good until we consider that a 4K 4:3 bayer sensor would only yield about 2.8K resolution anyway.

Arri’s s35mm cameras are open gate 3.2K bayer sensors so they will result in an even lower resolution image, perhaps around 2.2K. Do remember that the original Arri ALEV sensor was designed when 2K was the norm for cinema and HD TV was still new. The Arri s35 cameras were, for a long time, the gold standard for Anamorphic because their sensor size and shape matches the size and shape of a full size 35mm movie film frame. But now cameras like Sony’s Venice, which can shoot both 6K and 4K 4:3 and 6:5, are starting to take over.

While Netflix normally insist on a minimum of a sensor with 4K of pixels horizontally for capture, they are permitting sensors with lower horizontal pixel counts to be used for anamorphic capture because the increased sensor height needed for 2x anamorphic means that there are more pixels vertically. The total usable pixel count when using the Arri LF with a typical 35mm 2x anamorphic lens is 3148 x 2636 pixels. That's a total of 8 megapixels, which is similar to the 8 megapixel total pixel count of a 4K 16:9 sensor with a spherical lens. The argument is that the total captured picture information is similar for both, so both should be, and are indeed, allowed. The Arri format does lead to a final aspect ratio slightly wider than 2:39. 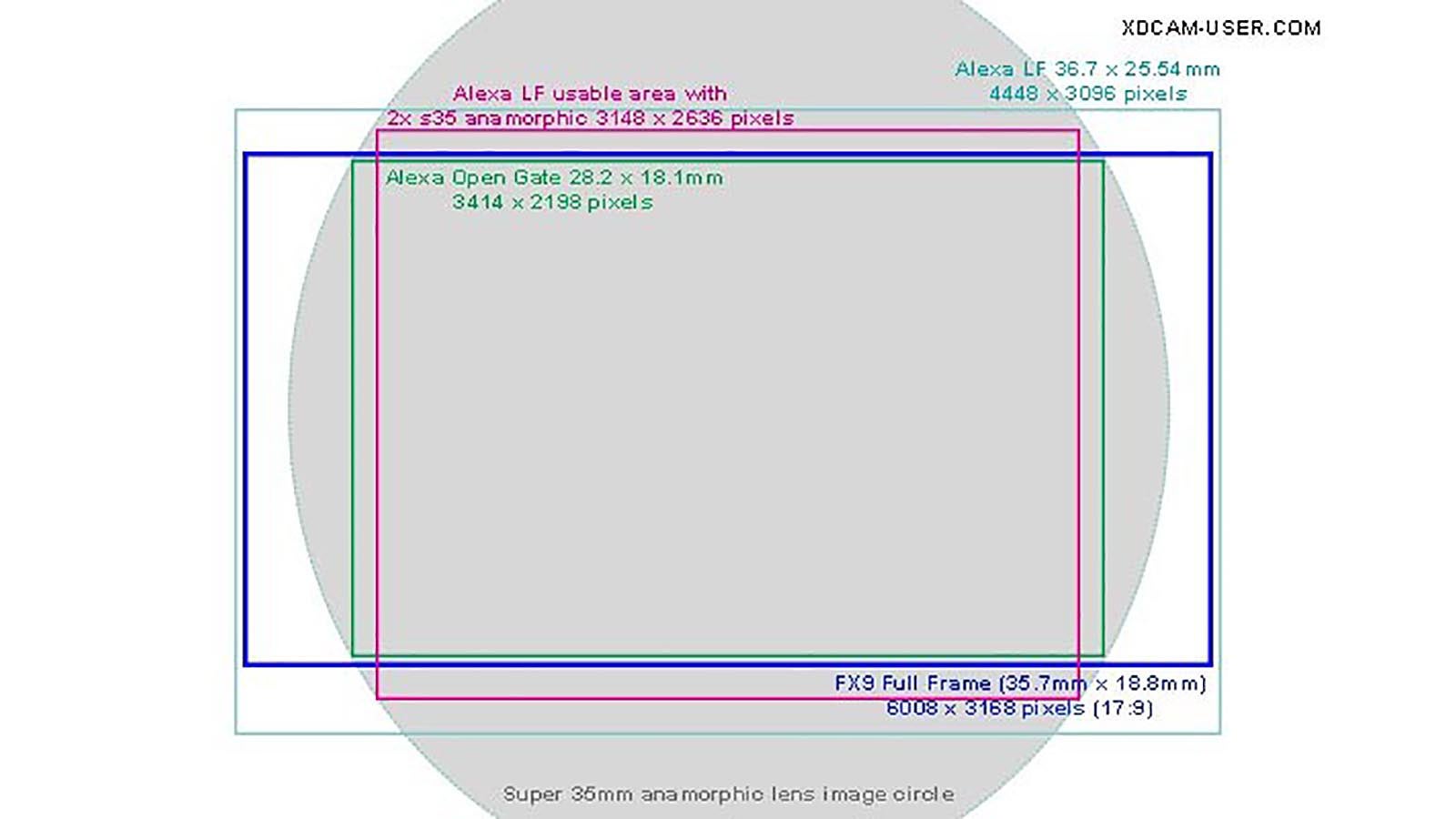 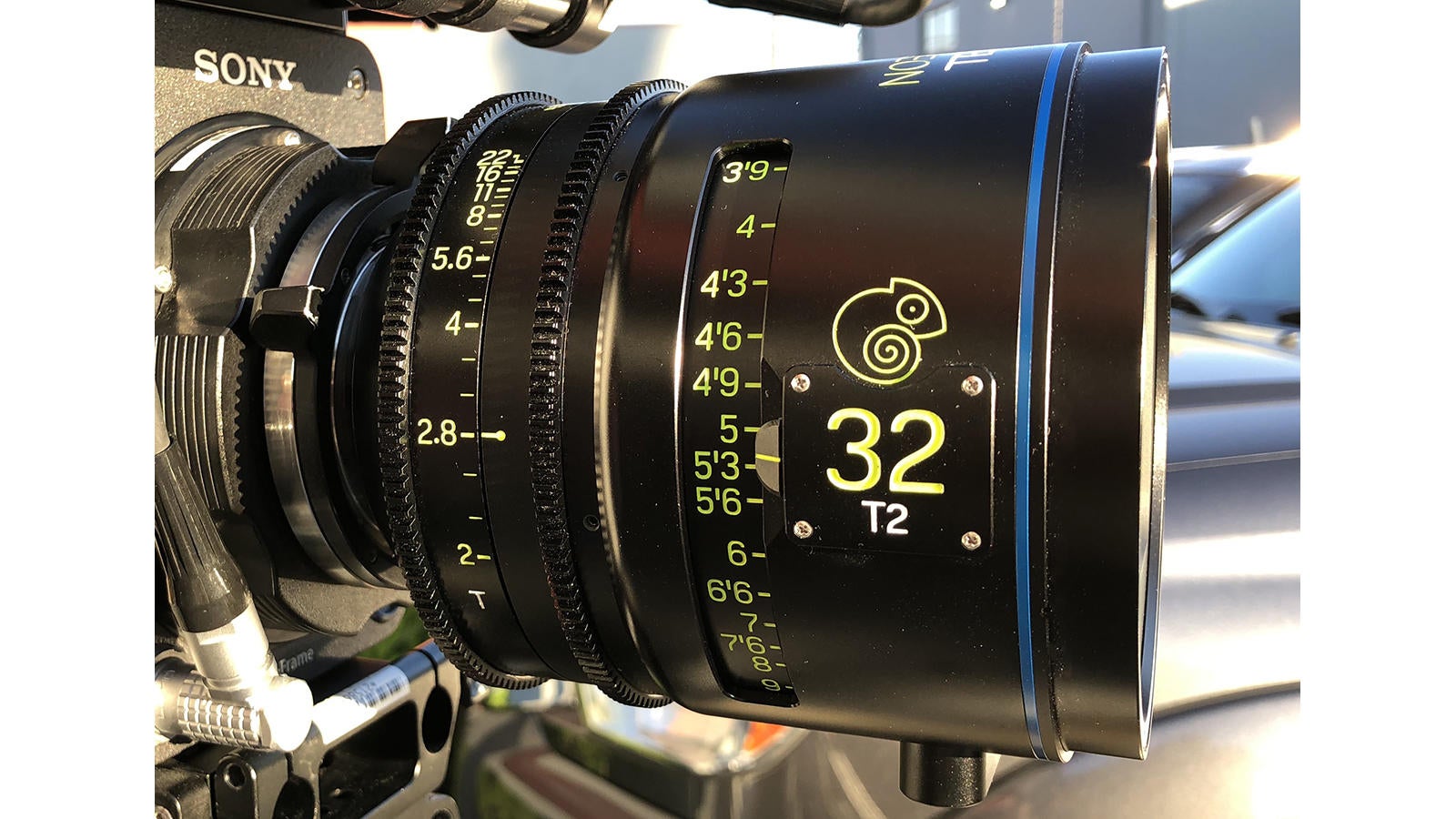 So could the FX9 get Netflix approval for 2x Anamorphic?

The FX9’s sensor is 3,168 pixels tall when shooting FF 16:9 and its pixel pitch is finer than the Arri LF sensor. When working with a 2x anamorphic s35mm lens the image circle from the lens will cover around 4K x 3K of pixels, a total of 12 megapixels on the sensor when it’s operating in the 6K Full Frame scan mode. But then the FX9 will internally down scale this to that vignetted 4K recording which needs to be cropped.

6K down to 4K means that the 4K covered by the lens becomes roughly 2.7K. But then the 3.1K from the Arri when debayered will more than likely be even less than this, perhaps only 2.1K.

But whether Netflix will accept the in-camera down conversion is a very big question. The math indicates that the resolution of the final output of the FX9 would be greater than that of the LF, even taking the necessary crop into account. But this would need to be tested and verified in practice. If the math is right, I see no reason why the FX9 won’t be able to meet Netflix’s minimum requirements for 2x anamorphic production. If this is a workflow you wish to pursue, I would recommend taking the 10 bit 4:2:2 HDMI out to a ProRes recorder and record using the best codec possible until the FX9 gains the ability to output raw. Meeting the Netflix standard is speculation on my part, and perhaps it never will get accepted for anamorphic, but to answer the original question...

Can we shoot anamorphic with the FX9? Absolutely, yes we can and the end result should be pretty good. But you’ll have to put up with a distorted image with the supplied viewfinder (for now at least).