Shot on VENICE: Behind the Scenes of ‘The Gray Man’

Stephen Windon is no stranger to epic cinematography and grand scenes. You may recognize his work from Star Trek Beyond, The Pacific, and six of the Fast and the Furious titles, including F9. In the world of fast-paced action movies, he’s a cinematographer who knows how to capture the audience's attention with the power of lighting and camera alone.

When Anthony and Joe Russo first approached Windon about The Gray Man, he knew it would be different than anything he’d done before.

The Gray Man stars Ryan Gosling along with an accomplished ensemble cast like Chris Evans and Ana de Armas. Gosling plays a shadowy CIA agent on the run from a sociopath and an army of vigilante criminals trying to claim the bounty on his head.

From elaborate fireworks as key lights, modern noir, and a juicy, saturated color palette of salmons, reds, and greens all playing nice on the Sony VENICE, Stephen Windon ASC, ACS does one hell of a job.

“This was my first collaboration with the Russo brothers, so it was very exciting for me,” explains Windon. “I loved their take on everything. It's a very different action film stylistically, and of course, that's brought about by the Russo Brothers’ take on this kind of genre of film.”

Windon explains that to come up with the look of the film, they looked at classic action scenes and details of classic film noir lighting.

For Windon, the next exciting step came to pitching an idea that would take The Gray Man into territory that neither Windon nor the Russo Brothers had been before.

“I thought the beginning could be a modern take on a big, grand MGM musical.  Imagine a big musical, but now we're doing it in 2022 with super saturated colors and embracing the technology that we have nowadays, like flying race drones around the ballroom with a camera on it. The brothers loved my description of it. It was a great way to open the movie. 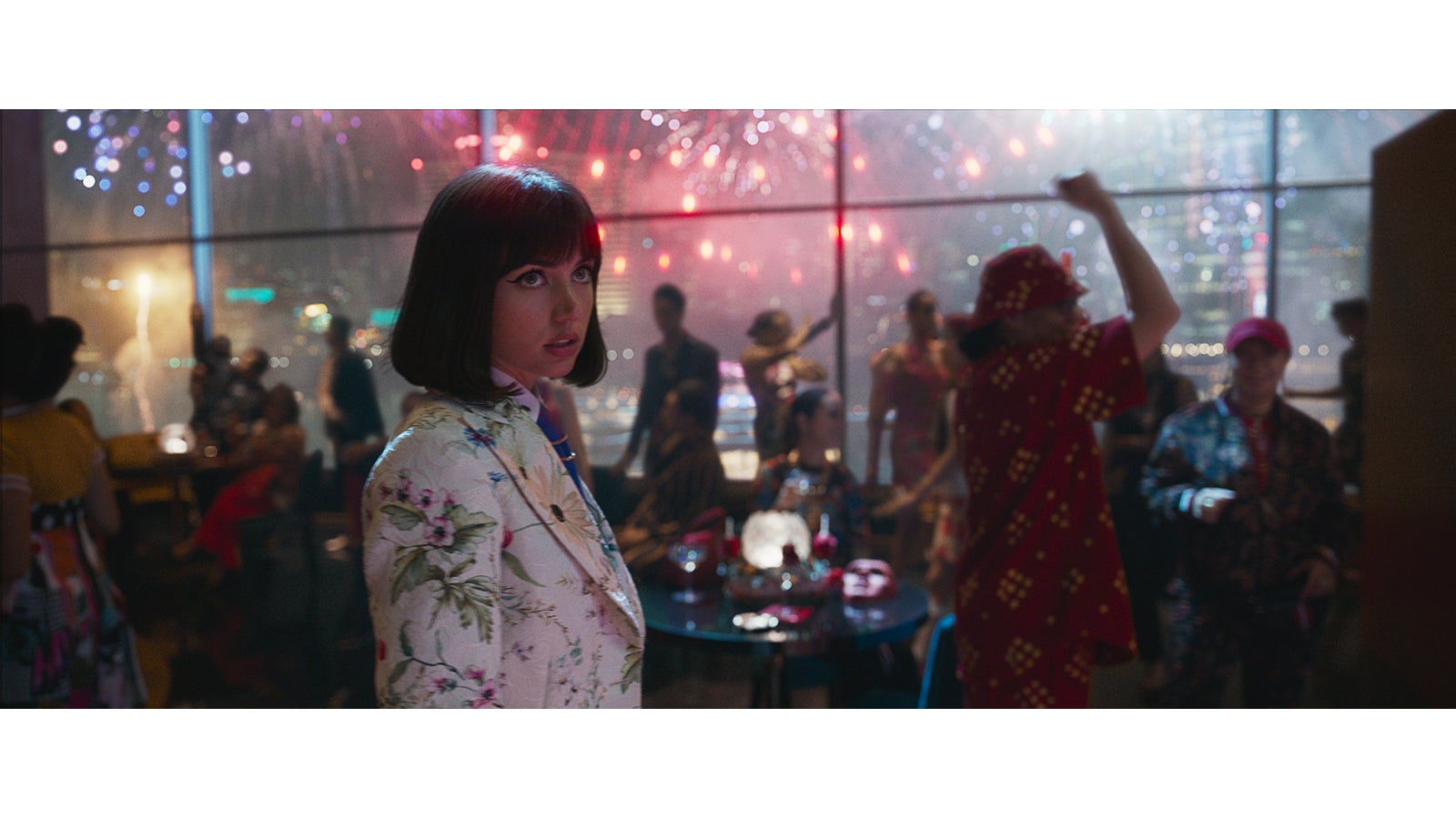 Designing the opening scene extravaganza like a modern musical

The spectacular opening scene after the opening titles of The Gray Man introduces us to Agent Six (Ryan Gosling) in downtown Bangkok. To pull it off, Stephen Windon asked the Russo Brothers if he could turn the lights off... and turn the fireworks on.

“The whole set was designed and built just for that opening,” describes Windon.” It took months of set construction by production designer Dennis Gassner with pre-lighting. I pitched to the Russo Brothers the idea that once Agent Six had used the distraction of turning the power off in the building, fireworks would now be the main light source. That's how that little skirmish fight happens. I designed them with my gaffer, Bobby Krattiger. These lights were Fiilex Matrix that literally would start on the stage floor and would just shoot 50 feet into the air on vertical truss rigs. With my programmer, Eric Androvich, we designed it so it'd be a big boom. These vertical LED panels would go up and then chase into horizontal LED’S, again Fiilex Matrix lights, and flash, flash, flash like paparazzi, and then they'd settle. Then five seconds later, boom with another color, would repeat the same program, and then sparkle, sparkle, sparkle. So it was playing and testing with that and experimenting with that so that there's no physically moving lights, but LED lights in a chase process in the programming to simulate fireworks shooting into the sky. In effect, we would have long shadows that would transition into shorter shadows as the light transition occurred.

I designed it so everything that I had was coming in from the windows, pouring in from outside, and from that harbor front. It was the culmination of a New Year's Eve celebration. So there's a big countdown: 5, 4, 3, 2, 1, and then kaboom. And it just goes crazy. There were moments where we could go black for a few frames, and then boom again.

With the help of Gassner, Krattiger, Androvich, and his camera operator Geoff Haley, Windon was able to pull it off in grand style.

“That was really fun. The Russo Brothers are great storytellers, and they love to surround themselves with a great team.”

How Stephen Windon handled color saturation with the Three-Color Rule

“Reds and salmons were a big part of the color palette, particularly in the opening,” explained Windon. “But throughout the rest of the movie, my theory was to use color contrast as layers. I loved for us to design a shot with a foreground, midground, and background color, with the idea that we had a three-color rule in every frame.”

According to Windon, if you go through every shot, at least 90% of the movie has three colors in the frame.

“I didn't want to wash anything with all one color. To me, that's like just putting a filter on the camera. I wanted layers, layers, layers, and my three-color lighting kicked in every time.”

At times, this was designed by his team, and other times it was a collaboration with the Art Department to alternate, say, an amber practical lamp with a powder blue one. But how did Windon compensate for all the color saturation?

“The VENICE loves color saturation,” affirms Windon. “When I first tested the VENICE, because this was my first project with it, I knew from the beginning it was the right camera for this project. I loved the idea of having lots of red in the sets. It handled reds beautifully, especially if they were oversaturated. I used a lot of salmon color in the palette, as well as softer pinks, cyans, and purples. The VENICE was amazing with them all, and that's the main reason I love the camera.” 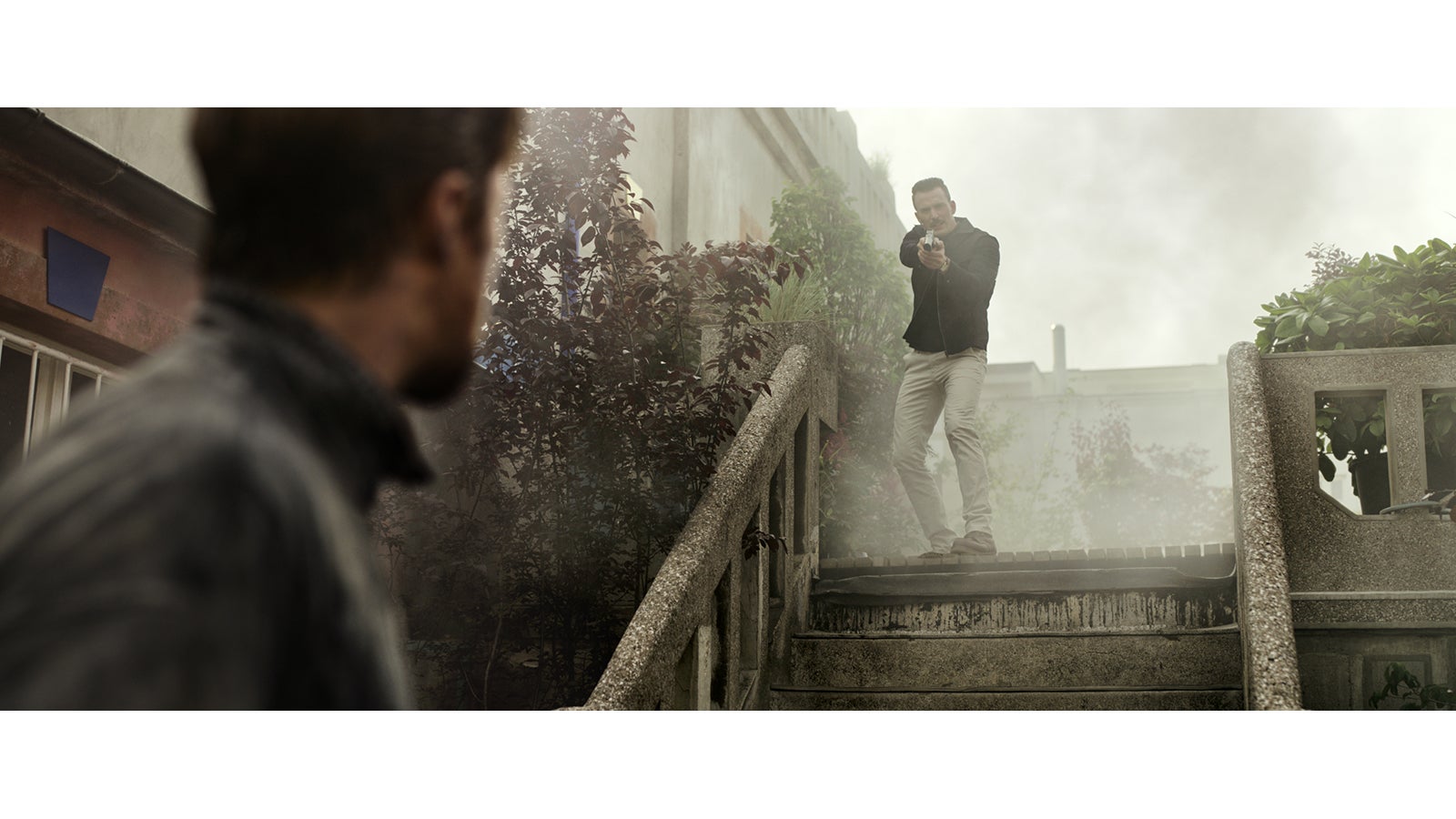 “I used a shallow focused lens on Agent Six, but never on the Evans character or anybody else for that matter,” explains Windon. “Agent Six is very deep and complex.”

In the script, Agent Six is a nuanced action figure, haunted by his past at times and motivated by it at others. For example, he goes to great lengths to save the daughter of his recruiting officer, Fitzroy (played by Billy Bob Thornton). Windon’s lens choice was all about serving that character.

“It was using a lens called the Artisan's Lens that I found for a still camera, funnily enough. I shot some tests in prep where the focus was so thin and so shallow; you just have an eye or just the lips talking and nothing else. You were just drawn into it in a really interesting way. I managed to get Otto Nemenz, our equipment supplier, to adapt it so we could fit it from Leica M to the VENICE. And the maximum aperture was T1. So the depth of field was like incredibly thin, incredibly skinny.”

Lenses with T1 aperture are almost unheard of, and as you can imagine, not easy to operate!

“T1 meant it was almost impossible to focus, but it was just so cool and dreamlike. So when things were happening around Agent Six, there'd be gunfire and weird distortion behind him. You hear it, but it's all about him. It's all about what his character is taking in at that moment, because of what happened in his childhood, all his memories keep coming back. It was a tool we used as part of the storytelling.” 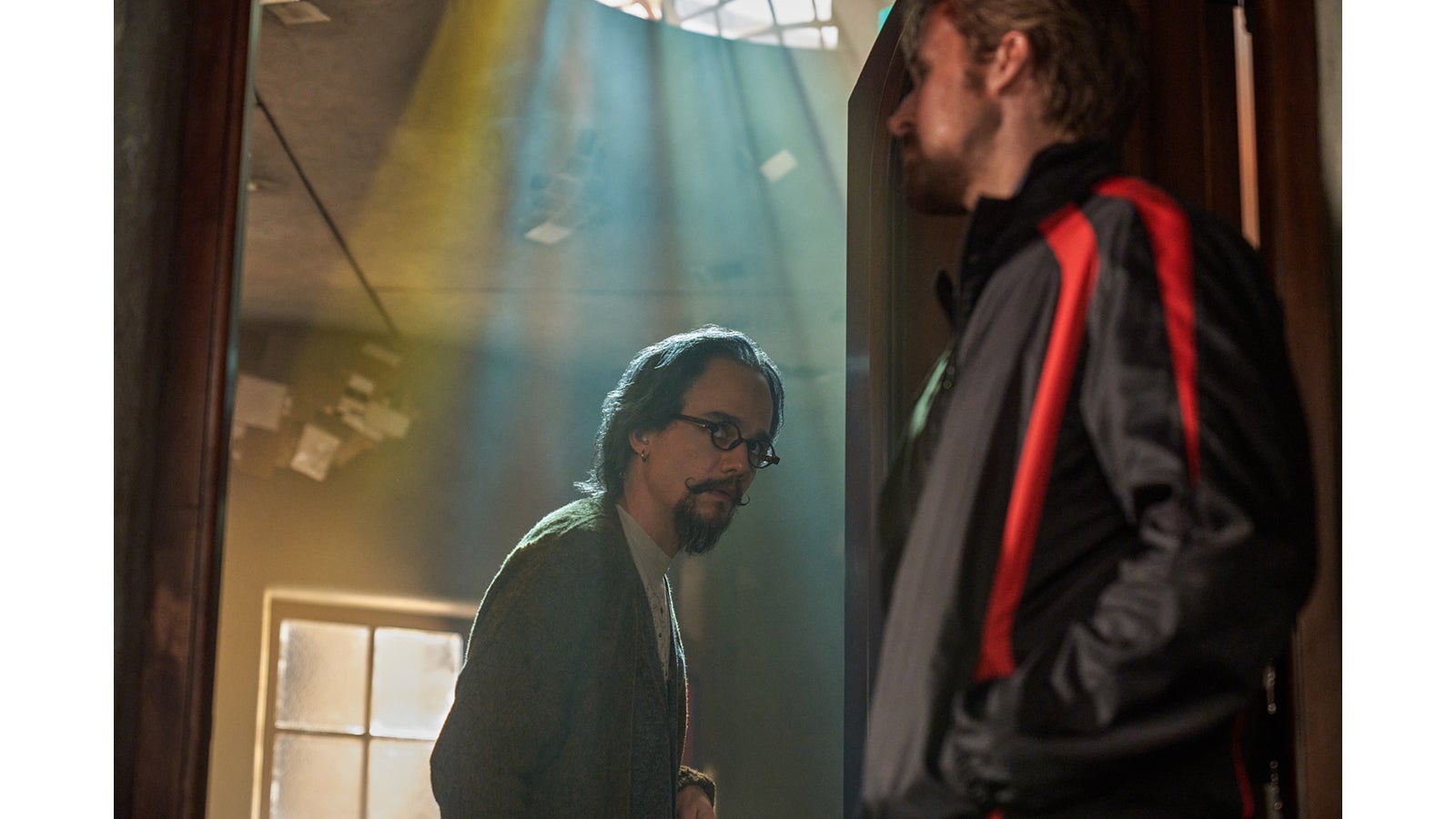 Evoking the lighting aesthetic of the classic film noir

While Windon said he didn’t want every moment of The Gray Man to look like a noir, he did want it to be a present element that would evolve with the film and the other classic cinema references.

“I often had hard light coming in from the side and lighting someone's face, particularly with Agent Six, played by Ryan Gosling,” described Windon. “For example, he'd be walking down an alleyway in Thailand, and I'd just have a light coming through a window, and we'd have blinds on them. I just love the idea that for five seconds, he was walking through all these really interesting shadows and zebra stripes. To be honest, a lot of that stuff you find on your feet on the day, which is what I love about what we do as the craft of cinematography. You can have all these ideas, but then you can just have these happy accidents, and you just go, ‘Wow. Let's do that. That's fantastic.’

Monitoring in HDR versus finishing in HDR

With HDR still being so new, many DPs are still on the fence about how much to consider it during production. Sometimes, this means that the HDR is only considered during the grade, leaving many viewers to complain that they just can’t see anything in the HDR version. The Gray Man was different.

“We monitored in HDR,” explains Windon, who admits he has rarely done so in the past. “At my DIT station, they had a bank of four monitors with Chris Cavanaugh, my awesome DIT. Chris has done like 10 movies with me. He's amazing. He thought it'd be a good idea to have one. He did HDR monitoring on one monitor and kept a check on it. It was the first time we did HDR monitoring. You can still see everything.” 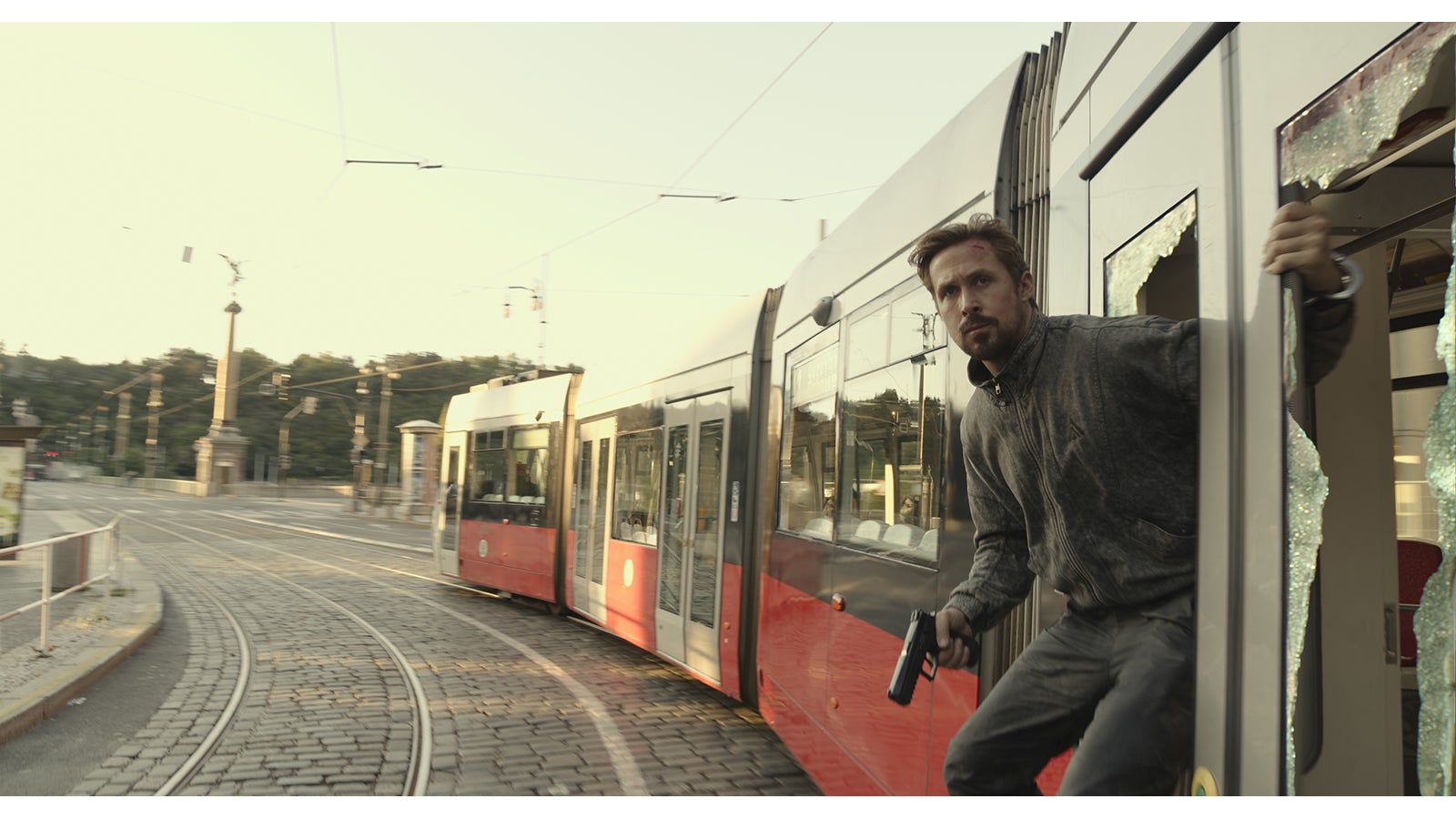 There used to be the right film stock; now there’s the right sensor

For Windon, the low-light sensitivity of the VENICE initially intrigued him.

“I'd been told about the 2,500 exposure index, which is amazing,” explains Windon about this as his first foray into the VENICE. “And I probably did two or three scenes using that. The rest of it, I just shot at 800. But I also was using ZEISS Supreme lenses, which are T1.5. I shot the whole movie at 6K because I believe that even for a Netflix show with HDR technology, everything looks sharper than it should be. I try to pull back on that by shooting at the highest resolution possible, so in this case, shooting VENICE in 6K, but using large format  ZEISS Supremes at an aperture of T1.5. I shot the whole movie at 1.5. Of course, even on the Supremes, it's still super sharp corner to corner. That's what I wanted: a modern 2022 released movie about a cool story, with sharpness from corner to corner. The marriage of ZEISS Supremes with the VENICE was my go-to system for that.

Having been an Alexa-only primarily shooter for 10 or 12 years, I was as familiar with that as, say, the Kodak 5219 used to be to me before. I am so familiar with it that I can light it with my eyes. After my first few weeks working with the VENICE, I felt the same thing happen. You're in the room, and boom, you see it. ‘That practical light should be darker. Can we change the shade and make it orange?’

I always believed there was the right film stock for a film. Now I think there's the right camera. And it just so happened that the VENICE was perfect for this show. Absolutely perfect.”

Check out the masterful color and lighting work from Stephen Windon on The Gray Man for yourself. Stream it on Netflix, and see if you can catch all the instances of the Three Color Rule!