"It's a really interesting show. For American Horror Stories, each story's different. We just lean into the story and find a visual style that helps support it – one that the director and myself can really embrace. Using the Sony VENICE is amazing because it's so easy to get different looks from that camera, especially given the dual base ISO and the high-resolution capabilities," explains Kniest. Kniest shared responsibilities with cinematographer Shasta Spahn and led the look for half of the season's episodes.

As AHS redefined horror stories, American Horror Stories has also redefined the genre. Instead of a typical slasher-style of horror, Kniest explains that this new style of horror is meant to elicit uneasiness and emotion of some kind. And to accomplish that uneasiness, the focus is more on the story and less on gratuitous blood and guts. For Kniest, the opportunity to change the look according to each independent episode's storyline was an exciting, creative challenge and something he also did for Mike Flanagan’s upcoming The Midnight Club on Netflix as well. 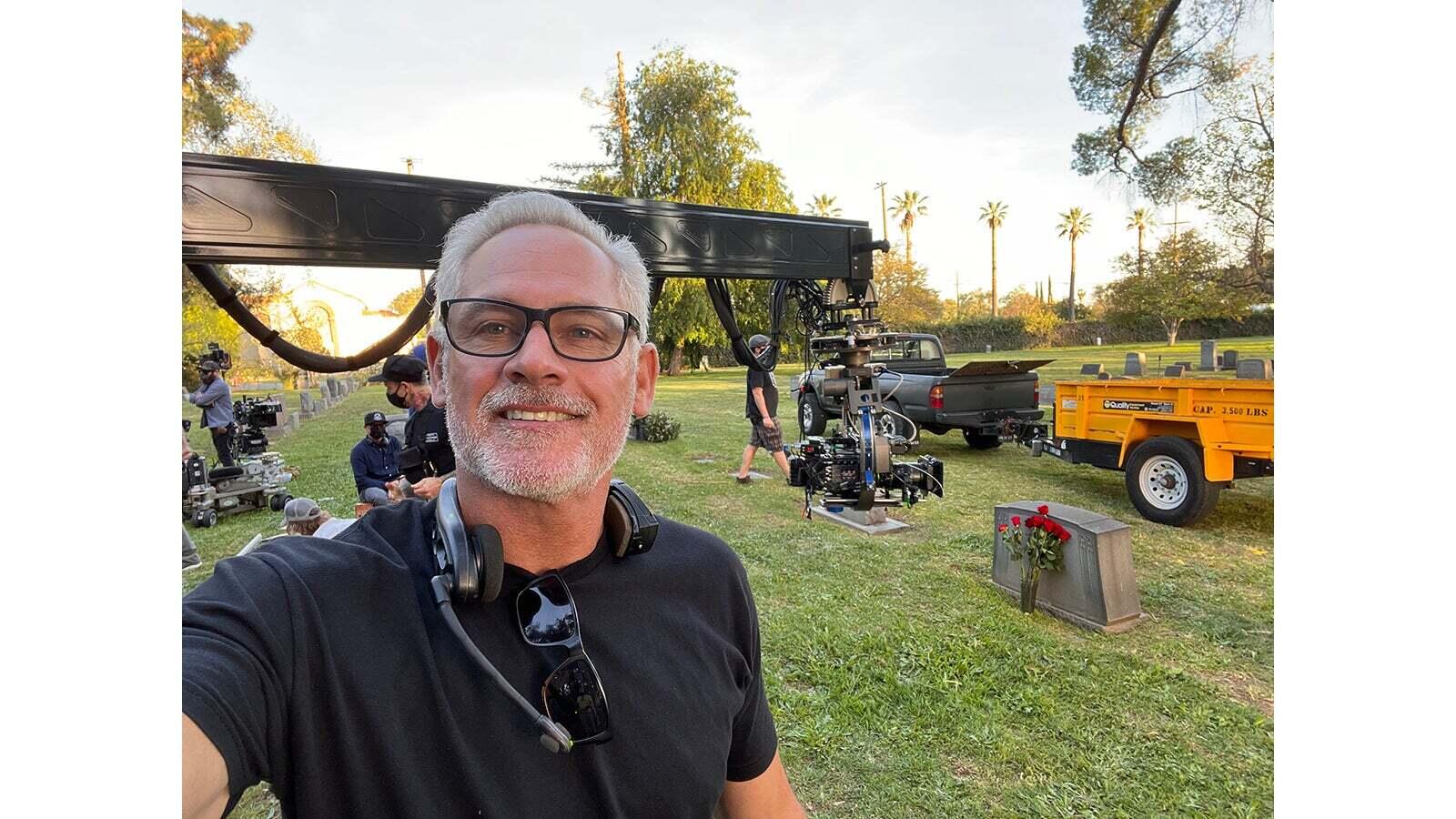 Behind the scenes with cinematographer James Kniest on the set of Episode 6: Face Lift

"I love it. We can welcome what's there on location. We can incorporate the streetlights that are sodium vapors or the store lights that are super fluorescent and lean into what’s available and rock it. And with LEDs, we can match it really quickly. Back in the day, we'd be gelling things and color temping it for film. But now, it's all pretty fast and immediate. I think the game has changed, about how fast we need to move. We're able to move much faster these days. So now, it's an expectation. Working with the Sony VENICE connected wirelessly, we can access the camera settings like EI (ISO), color temp, shutter angle, frame rate and especially the 1 stop internal ND filters in mere seconds. This gives the DP a lot of control over many variables to maintain the look on the fly.”

Kniest jokes that working on an episodic requires speed and reminds him of competition reality TV.

"I always tease it's like Chopped, ‘You've got four actors, 12 hours, two cameras. Go.’ You got to just make the coolest stuff you can and live with it and give the stage to the director. And the actors, give them as much time as possible. That's one of the things I'm always thinking about.”

And despite moving fast, neither the story nor the look feel rushed. Each episode features its own look. In Episode One: Dollhouse, which Kniest helped shoot a few parts of, the storyline is set in the 1950s and features vintage pastels with blooming highlights, while Episode Three: Drive is nostalgic of 90s films. 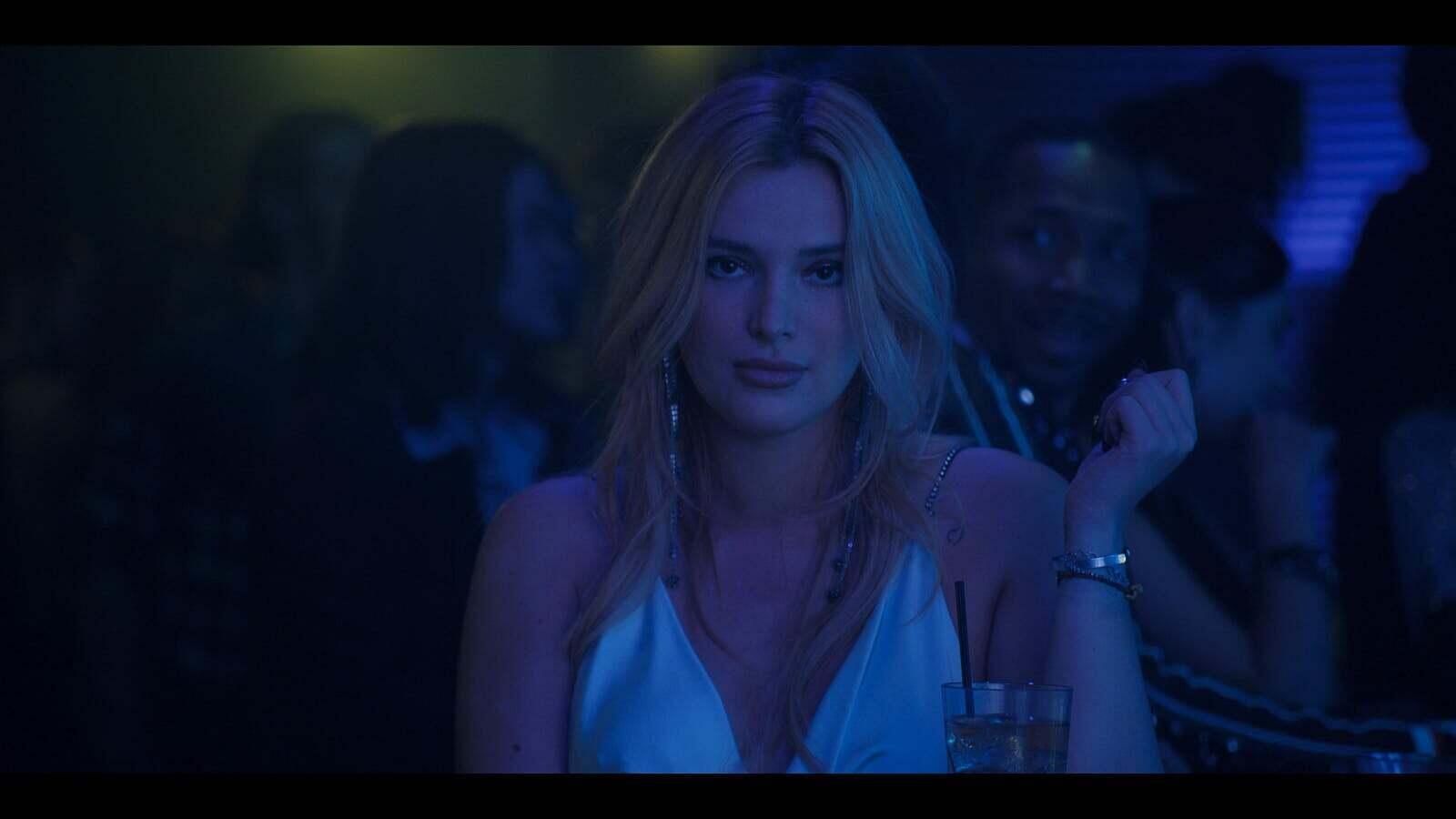 To craft each episode’s individual look, Kniest also played with lighting and a selection of LUTs for each.

"You really kind of lean on lighting, production design, and your LUTs. We don't roll with a DIT per se. So a lot of times, it's previz-ing. And by doing that, I pull tons of references and try to come up with some basic generic LUTs that fit that look. And I try to keep it simple. If you get too many LUTs on the show it's hard to remember what's what, especially since we move so quickly. And then we've had some really good colorists too, even dailies colorists, at a company called MTI."

To create the look for each standalone episode, Kniest pulled inspiration from a variety of sources. 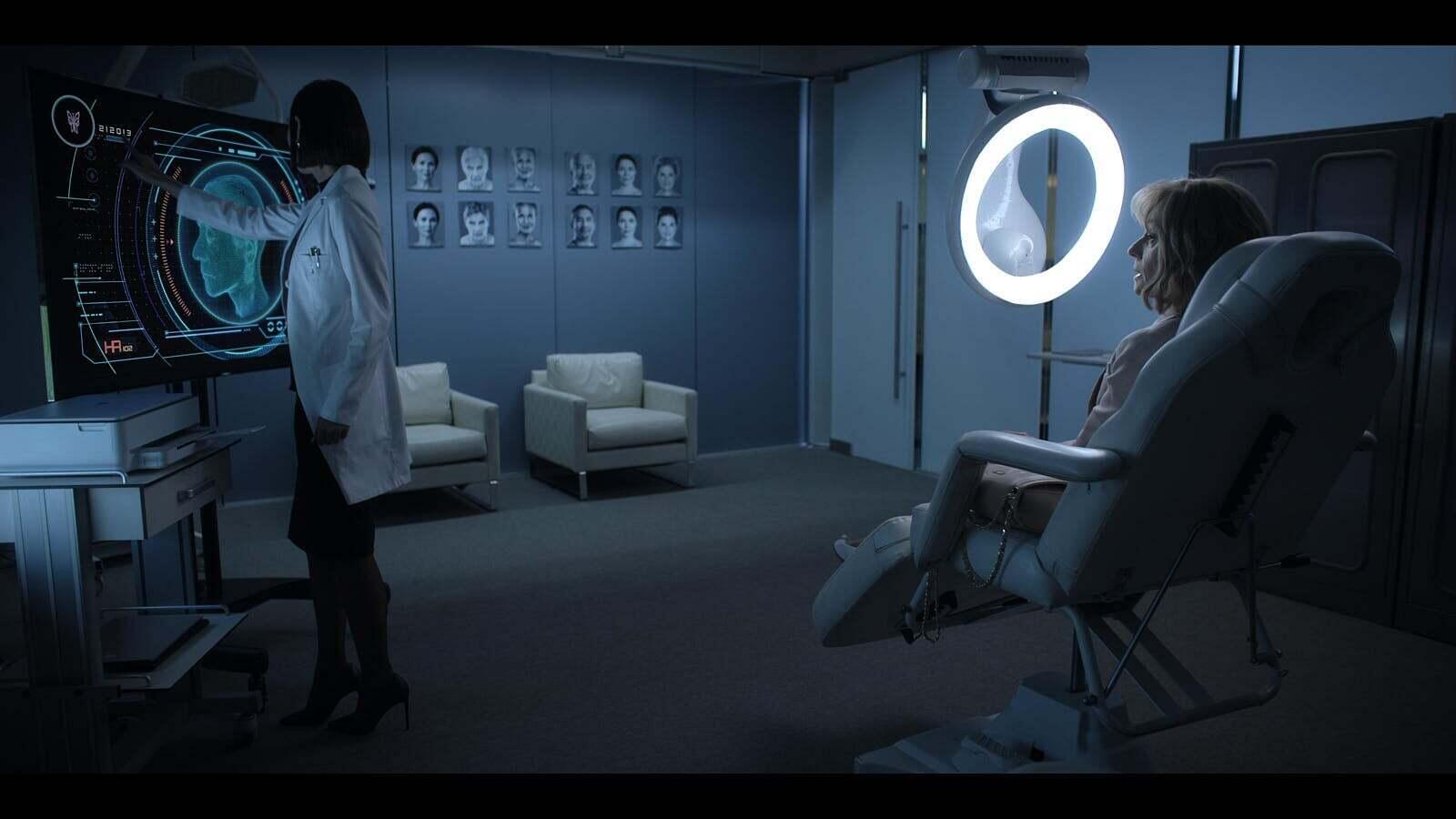 A screenshot from Episode 6: FaceLift

"For this Episode 7: Necro, we wanted the look to feel real. There's an arc where it starts out a little bit bright and happy and gets darker and moodier as we get deeper into the story. It's an interesting premise, to say the least, it centers around a girl who is struggling to find herself while in a relationship with a partner that doesn’t fit her. She works as a mortician. So, of course there are scenes that are set in a morgue and other unsettling places. We shot mostly on location with just a few builds on stage. I find it easiest to create the look through lighting, which I really like because you can control everything from color to contrast, quality of light and direction. We photographed many exteriors in cemeteries and in practical locations, and with not a lot of time to use fly swatters, to cover and control the sun. This is where having all the camera controls at your fingertips becomes incredibly helpful.

Then as things got a little bit creepier, we made it moodier. We changed the colors a bit. We leaned into the green tones, which I'm finding myself really liking. I was inspired by some of the films from the '90s when we put “white flame green” on everything, sort of that Fight Club look. Again, it's so easy to find that color space with the VENICE. It's amazing." 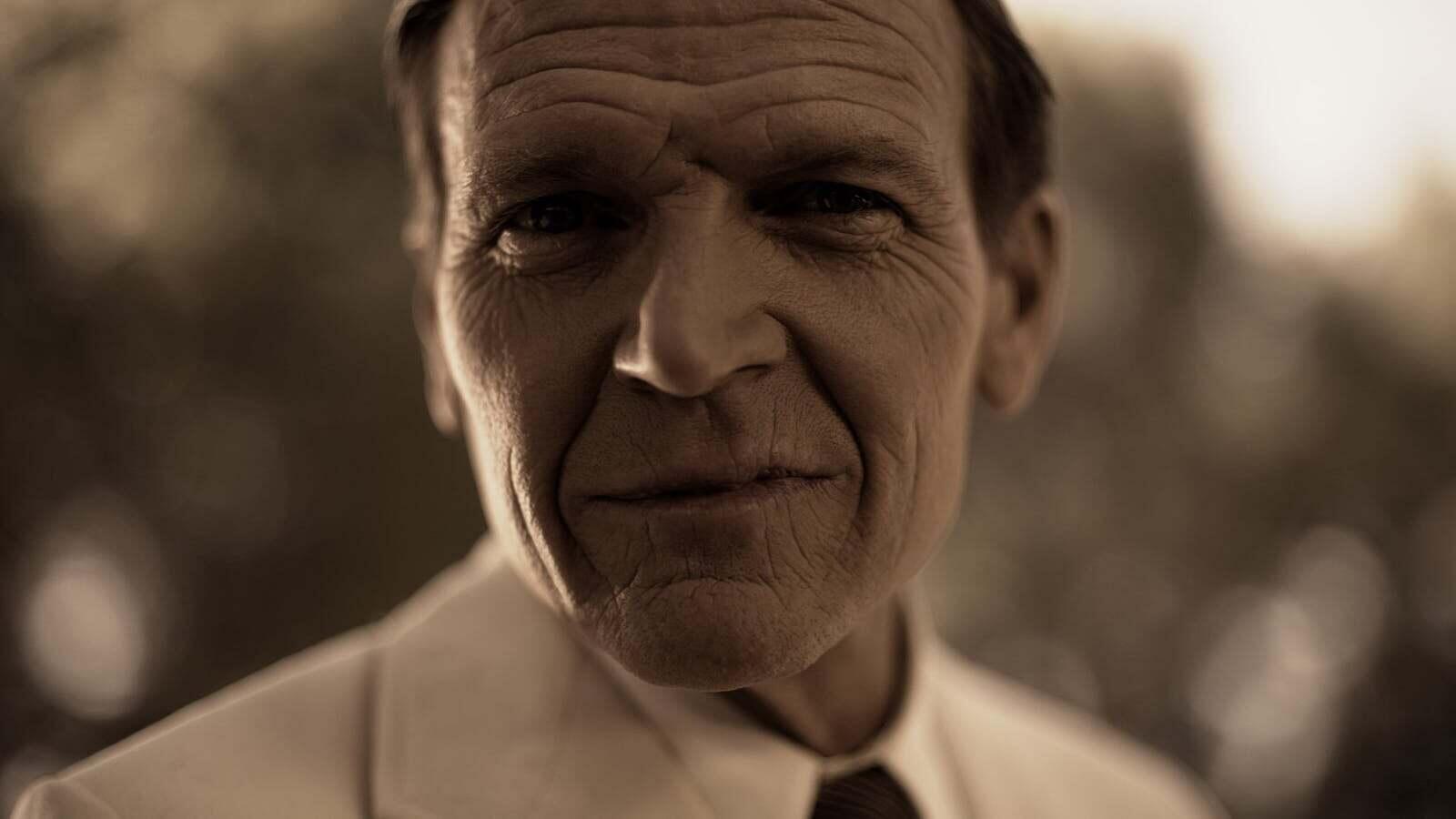 A screenshot from one of the looks on Episode 8: Lake

"And I always reference Atomic Blonde, it's one of my absolute favorite looking movies. In it they used a lot of mixed colors and I've always been enamored and mesmerized by how colors come together to make a new color, especially on skin tone. And how different skin tones react to the blending of certain colors. So I use Atomic Blonde a lot as a reference. For episode seven, some of the morgue stuff and some of the medical rooms, I drew from those '90s films, like The Game, Fight Club, movies that have stuck in my mind for years and years that I think sell that gritty, moody look with those green undertones."

To create the look, Kniest relied on the Sony VENICE paired with the Canon K35s and a MasterBuilt Zoom. This camera package alongside a host of specialty tools, from macro lenses to underwater shots, allowed Kniest to customize the look of each episode.

“For speed and flexibility, I have to say the VENICE is just amazing. It gives me a lot of comfort knowing I can light to it pretty quickly without having to worry so much about resolution and light sensitivity with dual native ISO of 500 and 2500.”

Kniest points to episode three, Drive, as a great example of what the VENICE helped him do. Namely, controlling contrast when shooting in harsh Southern California daylight conditions, to shooting without noise when in dark, nightclub settings as well as stunt driving sequences using only existing streets with no other lighting.

"For some reason, the way the VENICE renders color and contrast, it's not daunting to me anymore. I'm not so worried about it. I do get a chance to grip light a bit, which I love, and I don't have to worry about losing my blacks or having my highlights blow out as much as I used to. [In the episode], there are a lot of club scenes with nightclub laser, moving and strobe lighting. For years, we never wanted to go higher than 800 ASA on anything because we were so deathly afraid of noise, but I have no problem going to 2500 with the VENICE at all. And I'm really excited to get a chance to use VENICE 2, with even higher ISO ratings.” 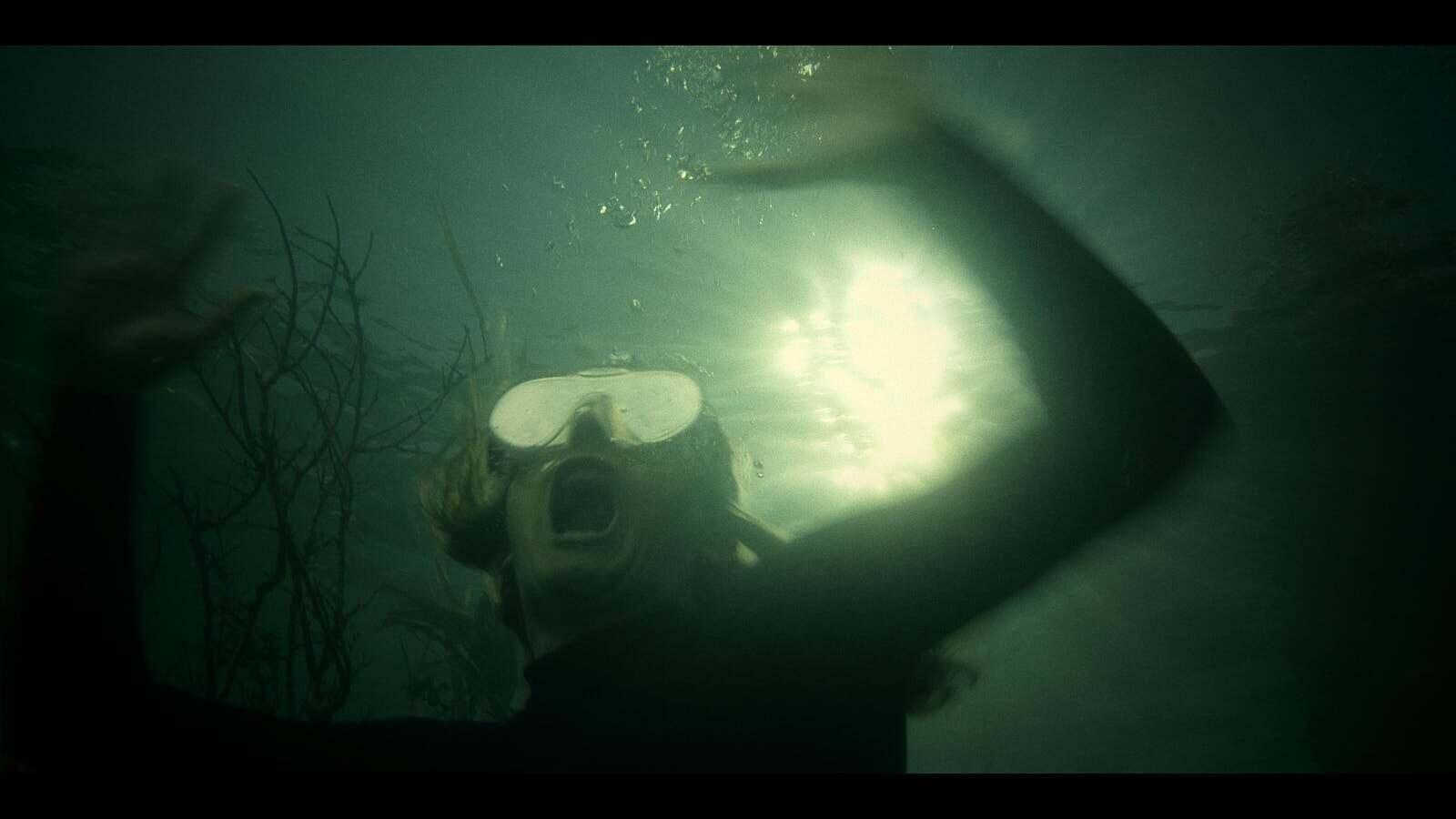 For Kniest, his favorite episode of the season was Episode 8: Lake, which stars Alicia Silverstone. The episode provided an opportunity to shoot underwater and create a custom look.

"I'm really excited for the looks we created for the underwater. And again, I did add a lot with lighting. We shot in a big tank at Sable Ranch and on a practical lake location in San Diego." 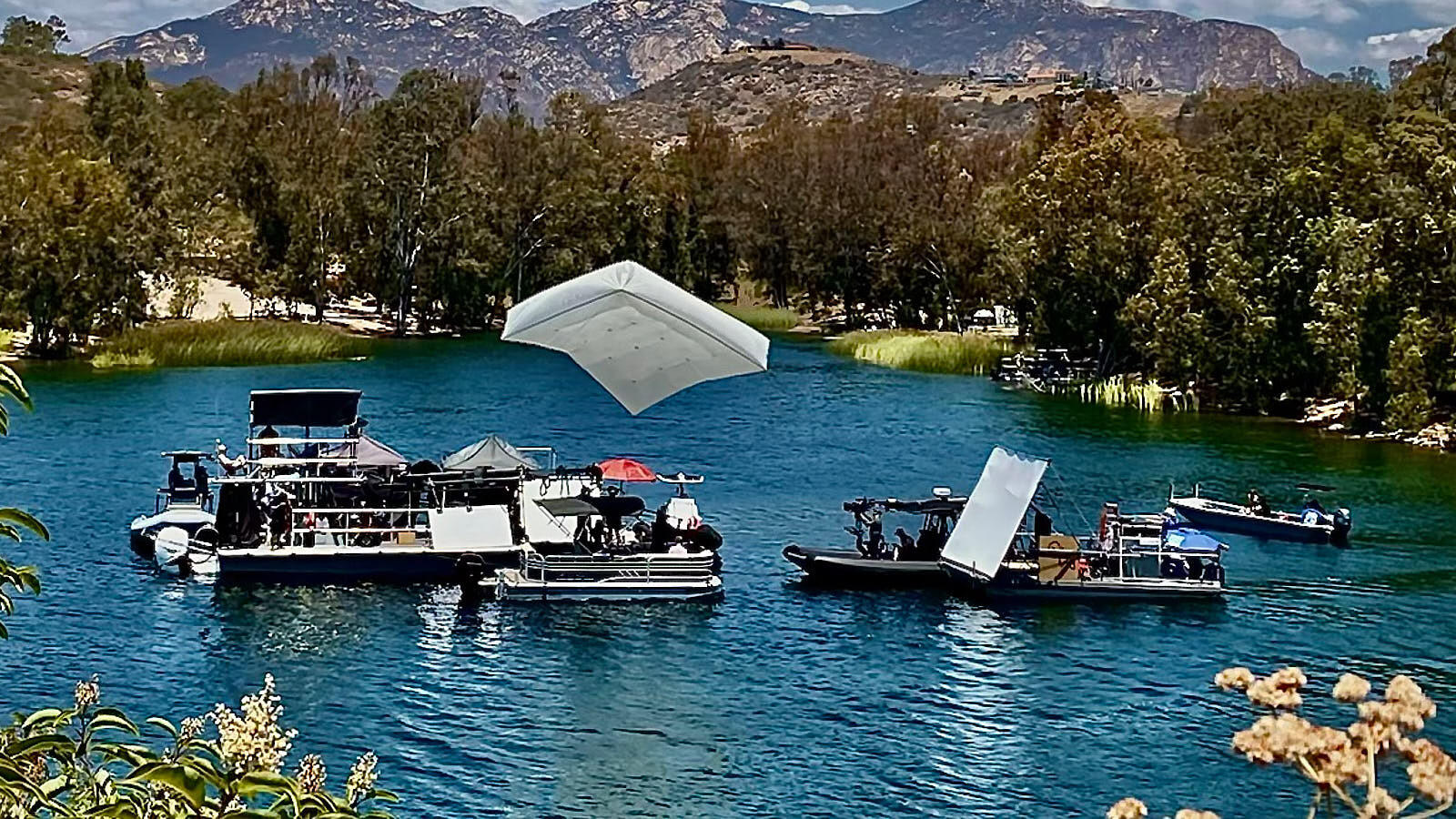 Kniest began his career as an underwater DP and also shot both on and in the water for The Haunting of Bly Manor. He describes his lighting setup.

"I was able to cover the tank for the most part with fly swatters so I could knock down the overall brightness and minimize the water rippling. And then add our own light into it where we wanted and needed it to help, A, obscure the background because of the walls of the tank and then, B, to add that kind of special water vibe, with the sun’s rays coming through, and not necessarily hitting our actors, but using it in the background."

And now, after flexing his muscles in the horror genre, Kniest is hoping that this collection of looks and cinematography will help him segue into a genre that’s closer to his heart.

“I have kind of developed a reputation for horror and it is a little bit of a niche. I would like to somehow bridge that reputation of making things kind of dark and moody and having a weight to the images into something with more action, like a John Wick, or Bourne Identity. That's where my heart lies as a viewer, and that's the kind of material I aspire to do more of.”