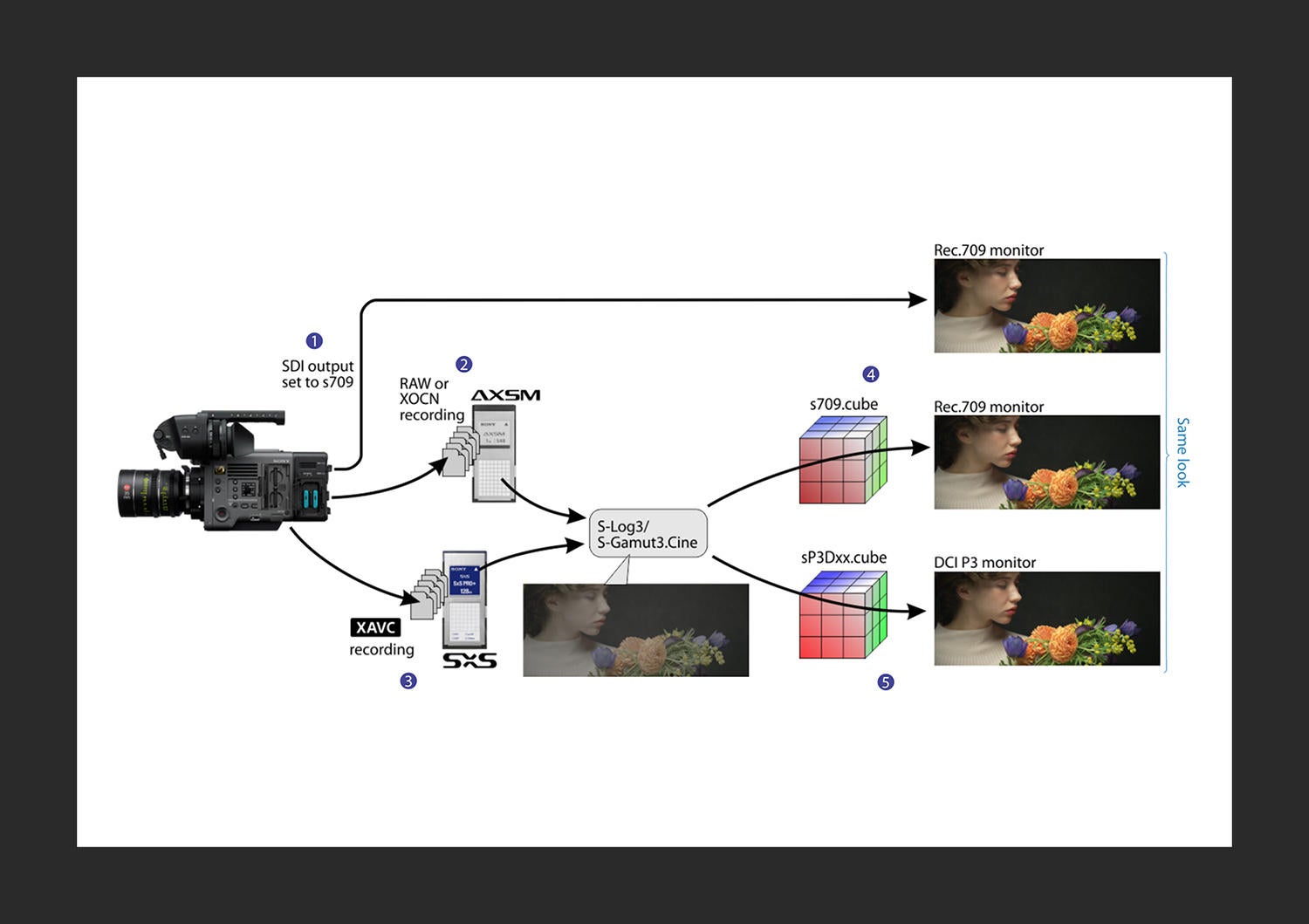 The diagram above displays the basic principles and capabilities behind creating production workflows using the camera’s integrated s709 functionality available from SDI output, and 3D LUTs like the s709.cube and sP3Dxx.cube files. Many different combinations of this basic example can be used for different shooting and production scenarios.

2. RAW and X-OCN recordings are made on AXSM media in the AXS-R7 recorder. If the camera is recording RAW or X-OCN as its main recordings, then the camera can also record XAVC clips as proxies on SxS media.

3. Both RAW, X-OCN and XAVC recordings can be run through post-production with S-Log3 dynamic range and S-Gamut3.Cine color space, maintaining high quality material through grading and editing.

4. The S-Log3/S-Gamut3.Cine material can be converted through an s709 LUT for reviewing on a standard Rec.709 monitor.

5. The material can also be sent through an sP3Dxx LUT for reviewing on a DCI P3 monitor. 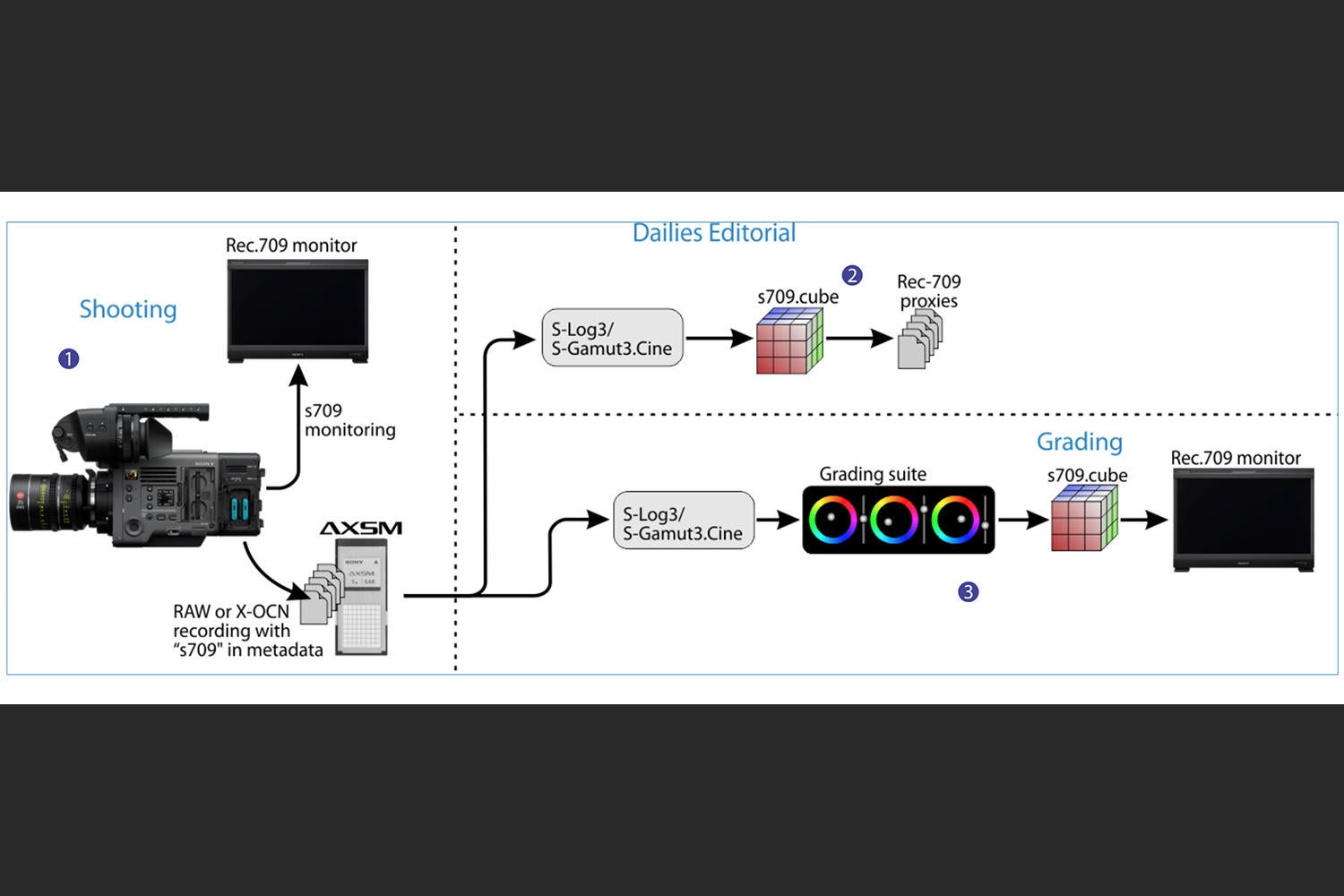 The diagram above shows an example of a workflow through the dailies/editorial phase and the grading phase of a typical production. It shows how s709 can be used for direct viewing on-set by using the direct output from VENICE, as described earlier.

Dailies/editorial can use s709 to create Rec.709 proxy clips for fast review and editing.

Later in the production workflow, during grading, s709 can also be used to provide a view of the S-Log3/S-Gamut3.Cine material on a standard Rec.709 monitor.

Select s709 for the SDI output, and record in RAW, or X-OCN.

Create proxies from the original materials using the s709.cube. If the materials are recorded in RAW/X-OCN, render them into S-Log3/S-gamut3.Cine, then apply the s709.cube and export as proxies.

3. Grade materials using s709 as the starting point for grading.

Grade materials based on the s709 look. If the materials are recorded in RAW/X-OCN, render them into S-Log3/S-Gamut3.Cine, and apply the s709.cube as an input LUT, or an output LUT of the grading pipeline to make it the starting point of your grading work. 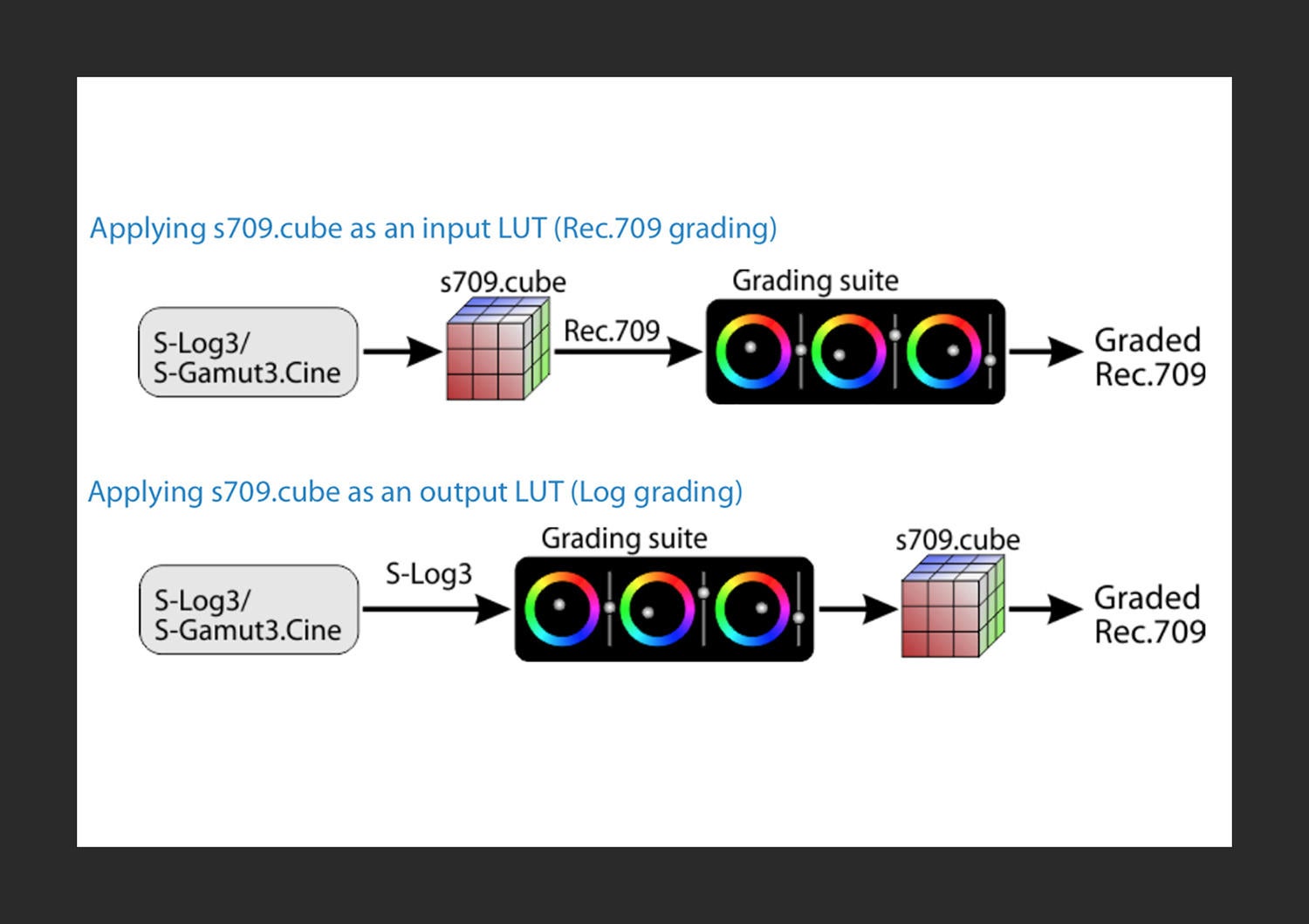 If your grading target is P3, apply one of the .cube file for P3DCI or P3D65 depending on the target white, instead of the s709.cube.

When using F65RAW and F55RAW simultaneously in your project, it is possible to match the color management of VENICE by developing the material through S-Log3/S-Gamut3.Cine.