On a non-descript street in Staten Island, roommates meet to discuss their tidiness habits, a concern among most co-habitating adults, though it’s the “discarded corpses” that are the issue. In the hilariously absurd comedy, FX’s “What We Do In the Shadows,” (WWDITS) the roommates are vampires, living with their familiars, in a mockumentary series that puts them in various ‘real world’ situations, trying to hide their ‘undeadness,’ all while being followed by a documentary crew.

What We Do in the Shadows | Season 2: Official Trailer [HD] | FX

Based on the feature film released in 2014, co-written and co-directed by co-stars Jemaine Clement and Taika Waititi, the film spun off two series by the same creators, “Wellington Paranormal” and, subsequently, WWDITS. The show garnered a multitude of Emmy nominations and wins in the past two years, including an Emmy nomination for cinematographer DJ Stipsen last year. Stipsen has been with the creators since the beginning: he came recommended for the film, shot both subsequent shows and is currently waiting to return to Toronto for a January production start of the third season of WWDITS.

Referring to the genesis of the film, the filmmakers gathered industry professionals to help on a film with a tiny budget. Stipsen’s documentary background appealed to the filmmakers. The creators gathered the same team for both the film and the spinoff, “and we loved working with them,” said Stipsen. “The show is so funny. We had no money, but everyone on the crew had a huge amount of skill so we could do really cool things that lent itself to the aesthetic.” 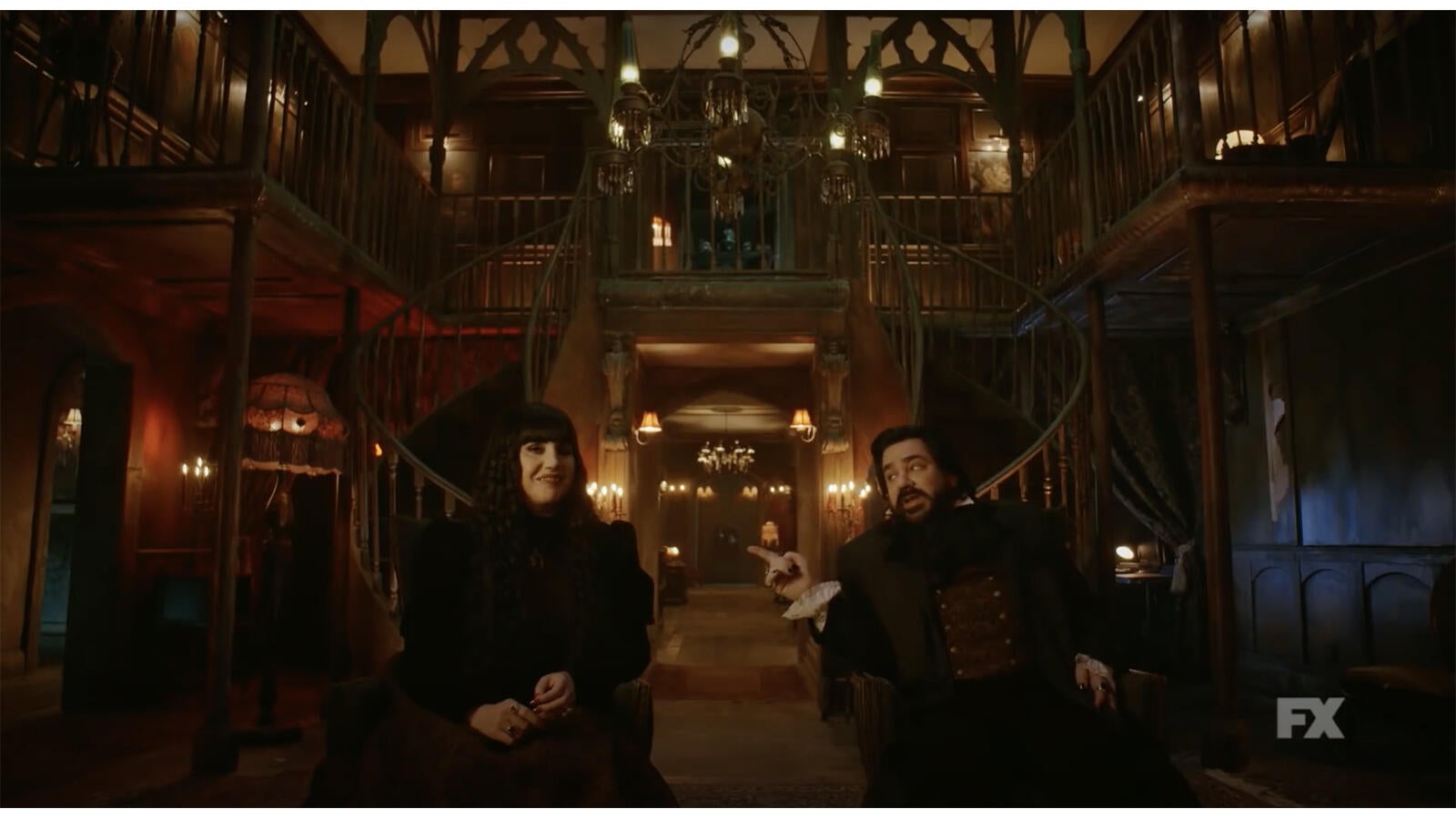 Stipsen has shot everything except the pilot of WWDITS; Christian Springer was the cinematographer, and shot with ARRI. “I think it was nine months between the pilot and the series being picked up. By that time, the Sony VENICE came out and I was able to choose it for the series.” Stipsen held side-by-side comparisons “and VENICE was the right choice for the show. The dual ISO, sensitivity to blacks -- or shadows, which is obviously necessary to me -- and the signal-to-noise ratio is amazing,” he explained. “Not to mention the internal NDs. It’s brilliant; I could make a split second decision to change the filter.”

The show centers around five key characters, living in a spooky old house, which Stipsen maintained, “We had to be able to light moodily, but also with enough light to zoom into someone’s face and read what they are thinking.”  With the Gothic-themed house, “The ethos of the show is to shoot like a documentary, so we try not to restrict what the actors do in a scene, or where they move, but still want the lighting to feel Gothic when in the vampires’ world. In color (with colorist Ethan Schwartz at Light Iron), I’m constantly pleasantly surprised with what we can drag out, or change, or twist. The sensitivity of the camera and the color bit depth is amazing.” Stipsen expressed that he wants the vampires’ world to be colorful, yet dark, so that when they leave the comfort and security of their world, “I try to contrast it by making it bright and bland when they enter our world.” 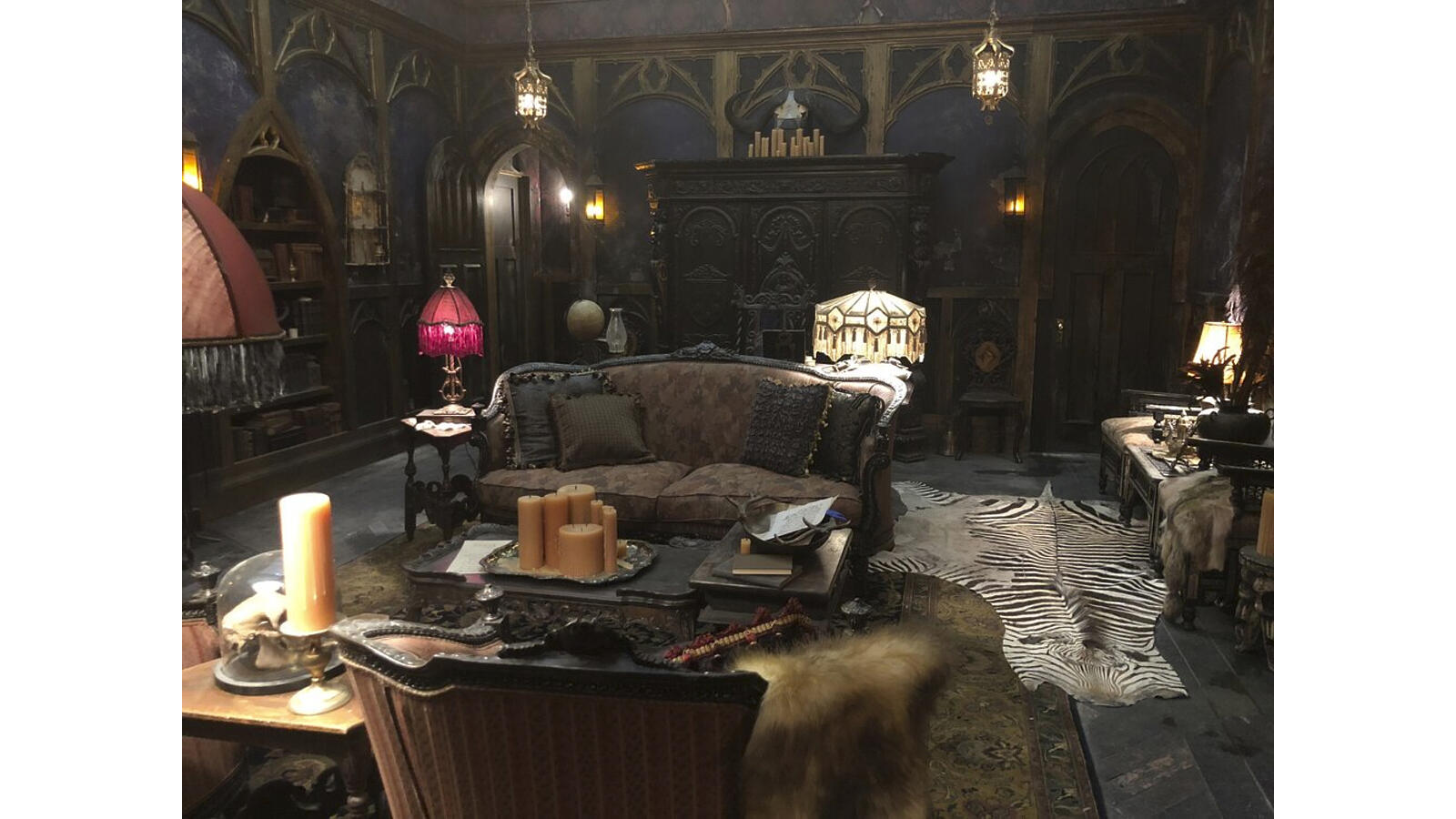 Given the docu-style manner in which the show is shot, Stipsen explained that Jemaine and Taika have a rule that if a character does something and walks off, the camera has to follow him or her.  “In the first few days of shooting, the camera operators would stop when they hit the end of the set knowing that around the corner was unshootable, but we wanted them the keep going to maintain the actors’ energy. That meant all the sets had to be lit to allow this to happen. No bad bits of the sets have made it into the edit yet!” he laughed. “The whole show is designed on jump cuts, and hiding edits.” Stipsen relied on Astera tubes, to light the inside walls of the house, to separate the actors from the background. “We were running up to 30 tubes in the fancy room, hidden all through that set to light walls, and pick up the actors’ eyes. Then the actors could move around. But you still have to keep it moody, so it’s that constant look -- that Gothic look -- but still able to see people’s eyes.”

The house is almost like another character, and Stipsen treated it that way, designing it’s own look. “I use greens, lavender, red and blues to offset the very warm tones of the house brought to the palette by all the candles we use. Our tones registered around 2000 Kelvin color temperature, to maintain that   ‘warm and old’ look. I also wanted to make sure we always had complementary colors in shot to give Ethan and I as much latitude in post as we wanted.” 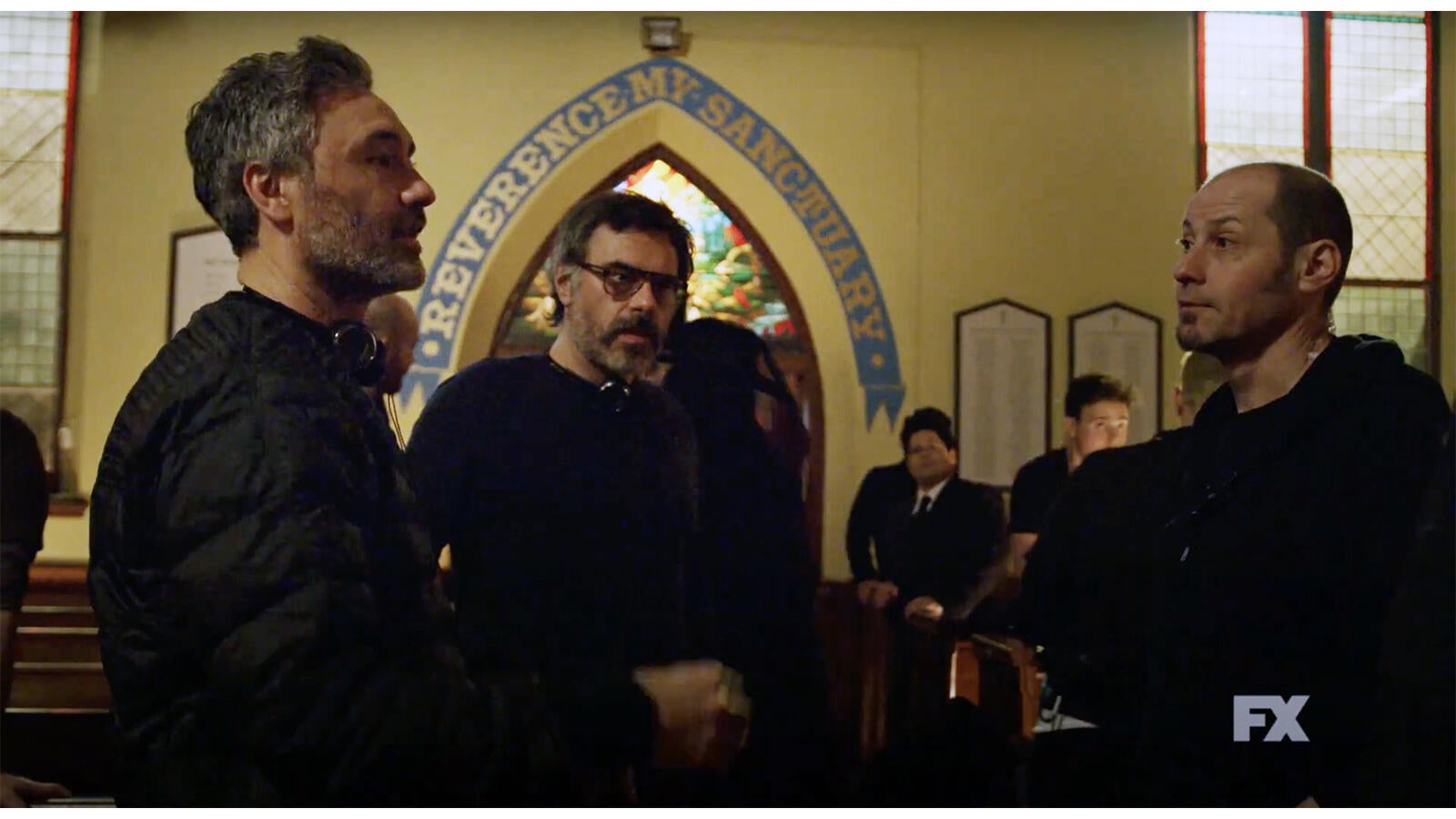 Exteriors also play an important part of the storyline, and production built an exterior set of the mansion. “There is a lot of light kicking about, but the house is still part of the Gothic feel, unlike the neighbor’s house, which was ugly,” said Stipsen, referring to the episode “Superbowl” which the vampires had understood to be a party for a “Superb Owl.” They are then introduced to the most traditional sports fan event of the year, The Superbowl. Stipsen explained how he lit a model of the iconic suburban home, complete with men sprawled on ugly couches while the women chatted in the kitchen. “You have to go against your instincts as a cinematographer and set out to make it ugly, so it increases the ‘fish out of water’ feel for the vampires,” he admitted.

With the four vampires living together, they also have Nandor’s familiar, Guillermo, who is human and desperately wants to become a vampire. Stipsen explained, “Guillermo is the bridge. For me, visually, Guillermo needs the documentary crew to turn around and look at, so he can address the audience: ‘did you just see that?’” Guillermo, as a character, is quite often embarrassed by the vampires, “but I didn’t want him to be visually different than them, because he wants to be a vampire.” 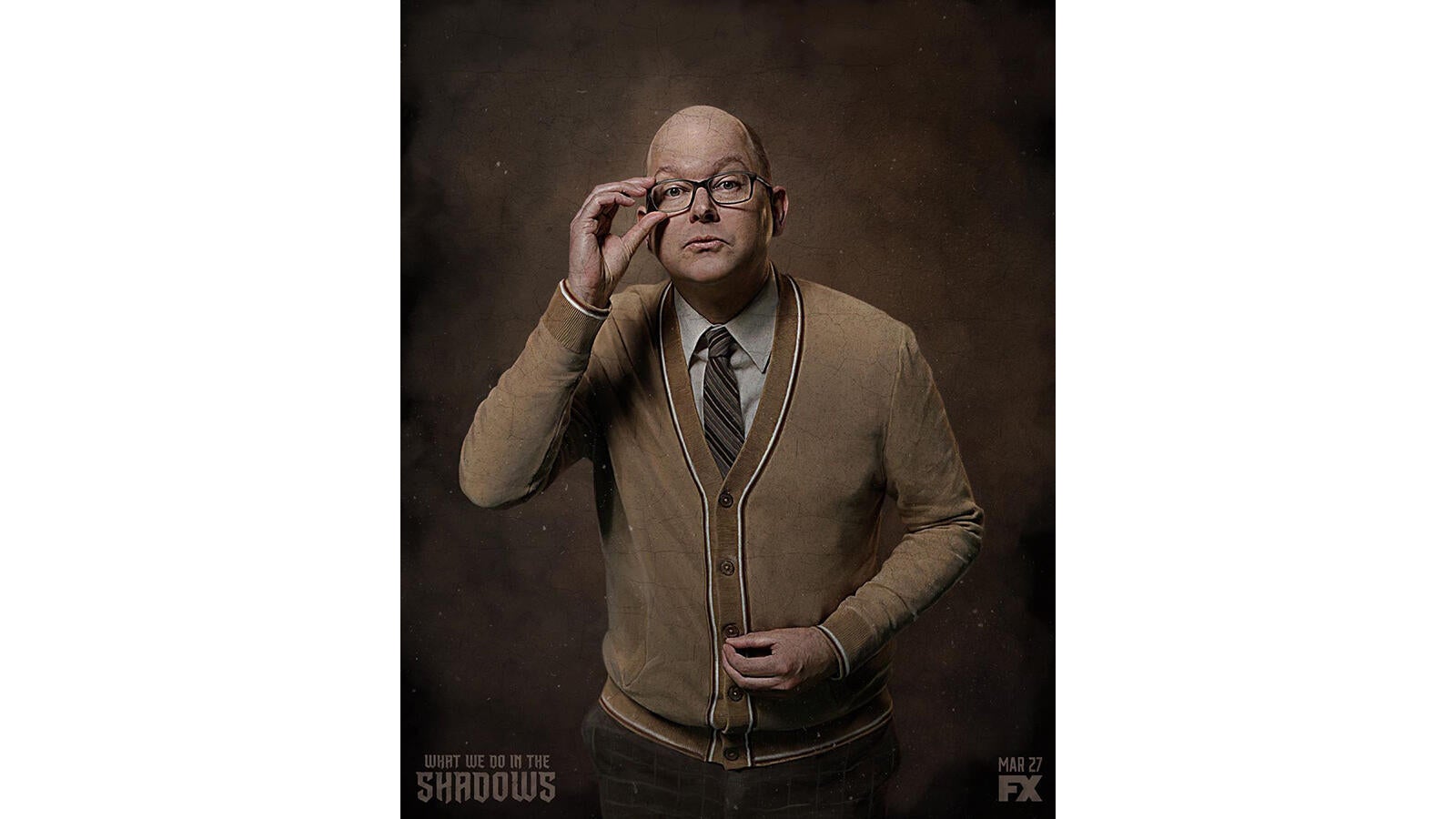 Stipsen added that his lighting is complementary to the fact that the show is always referencing pop culture, “there’s an undercurrent of social commentary.” For instance, the character Colin Robinson, an energy-sucking vampire, is so on-point as a character we have all encountered, and try to avoid.  With Colin, because of who he is, “it has to feel like the IRS office travels with him wherever he goes. His outfits are always a beige tone, and we used fluorescents in his bedroom, so it looks exactly like the office where he works.” The contrast is apparent when he joins the others in another room of the house where practical lighting includes an abundance of candles. “I told the designer I needed as many real candles as she could give me, because of the base ISO.”

For Stipsen, they stayed at a 2500 base ISO and pulled it back to 1600, because of the original concept of using available light. “I didn’t need to hang onto the highlights, I needed shadows,” he explained. 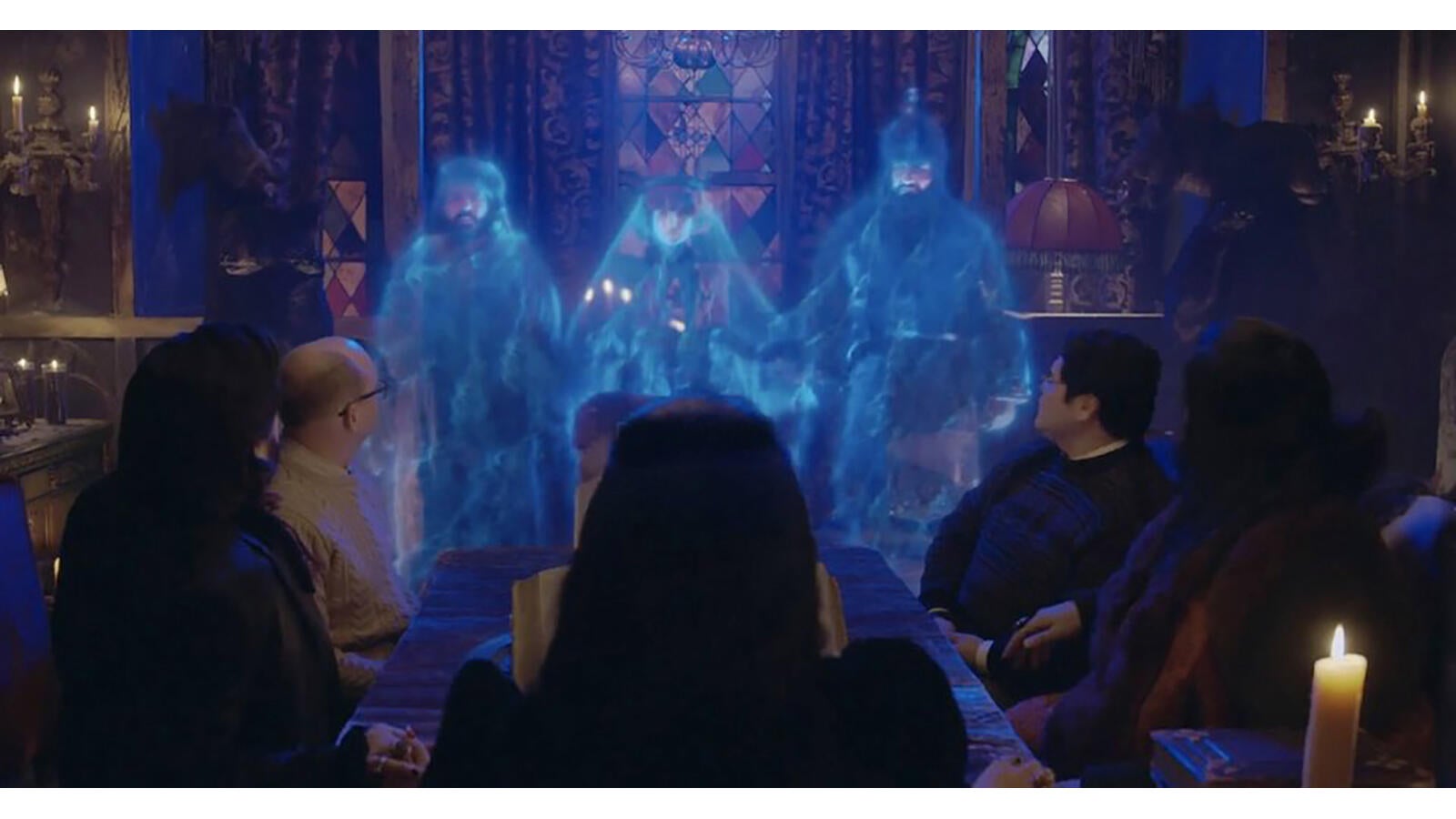 Even though the show is shot hand-held, in a quasi-documentary/reality style, it is heavy on VFX and stunts. “They don’t drive the show, but they are integral to it.” In one episode, where the vampires’ own ghosts of the past show up, Stipsen was excited to shoot as many in-camera effects as he could before the addition of visual effects. Together with the lighting department, they built LED suits for the actors and the horse. His gaffer worked with the costume department to create a vest that was covered in LED strips and held the battery pack and wireless control with sleeves of LED ribbon. The lights were remote-controlled. “We decided to go for blue as our ghost color, because so much of the episode is in the house and we wanted to contrast the browns and greens.” With careful choreography from the actors, they were able to shoot each scene twice, so that when it was done it would feel three-dimensional. The visual effects team then painted over it to create the final see-through ghost.

As the show continues to gain traction, Stipsen is impressed with the results of shooting with VENICE. “I choose the format that best suits the show, and the Sony VENICE is the perfect choice for WWDITS.  I've been very impressed with the beautiful pictures it has delivered.” 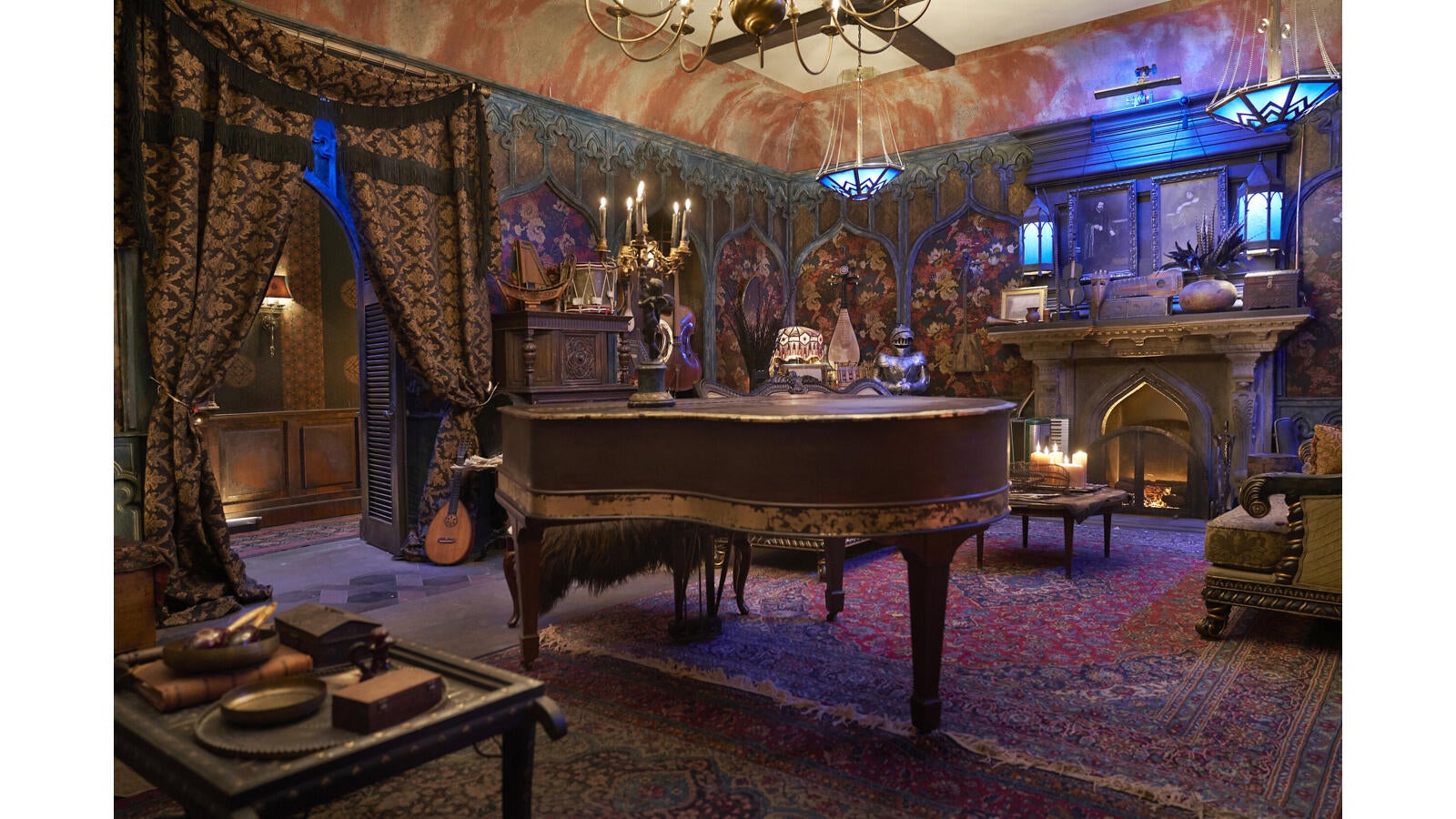 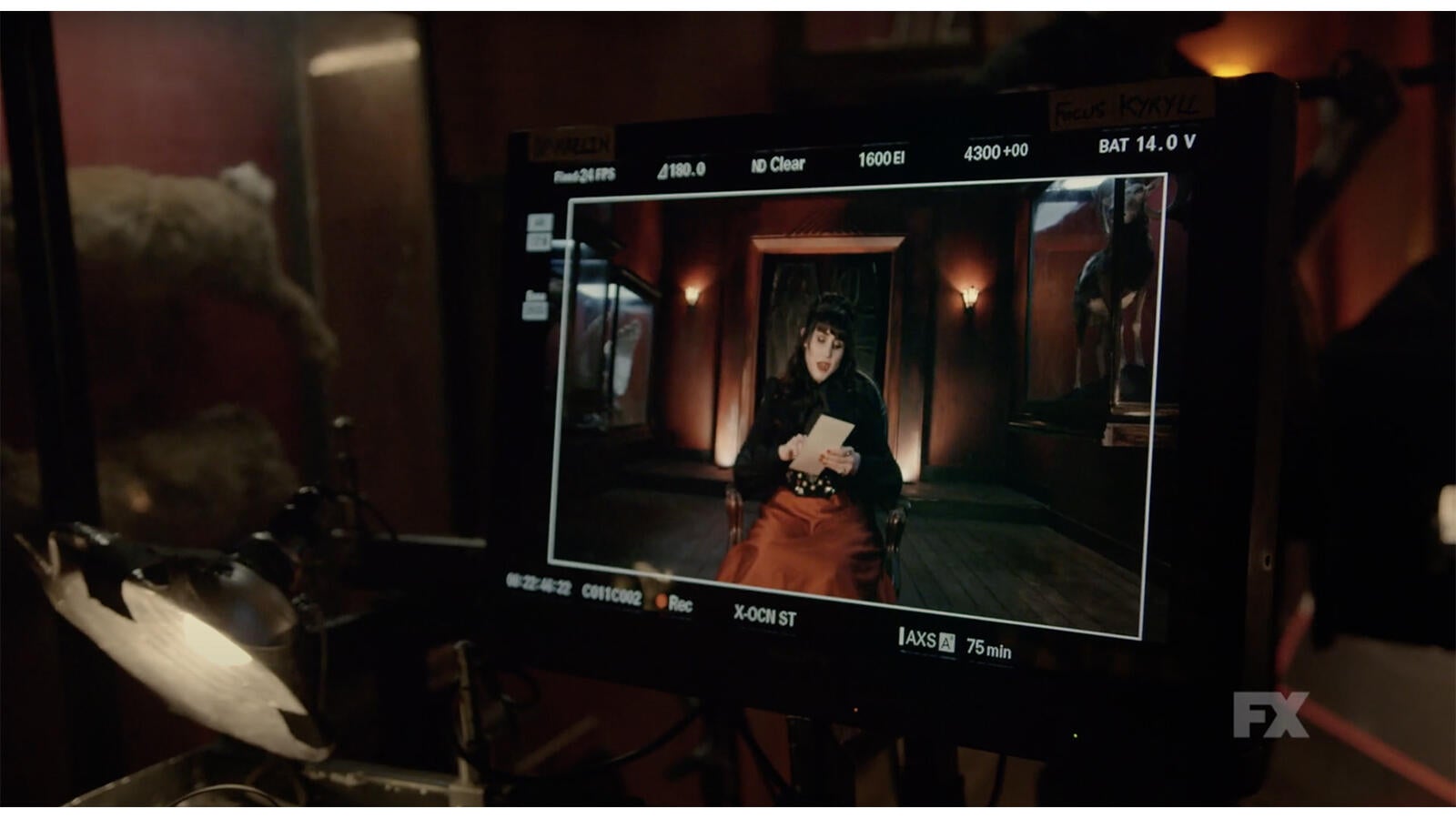 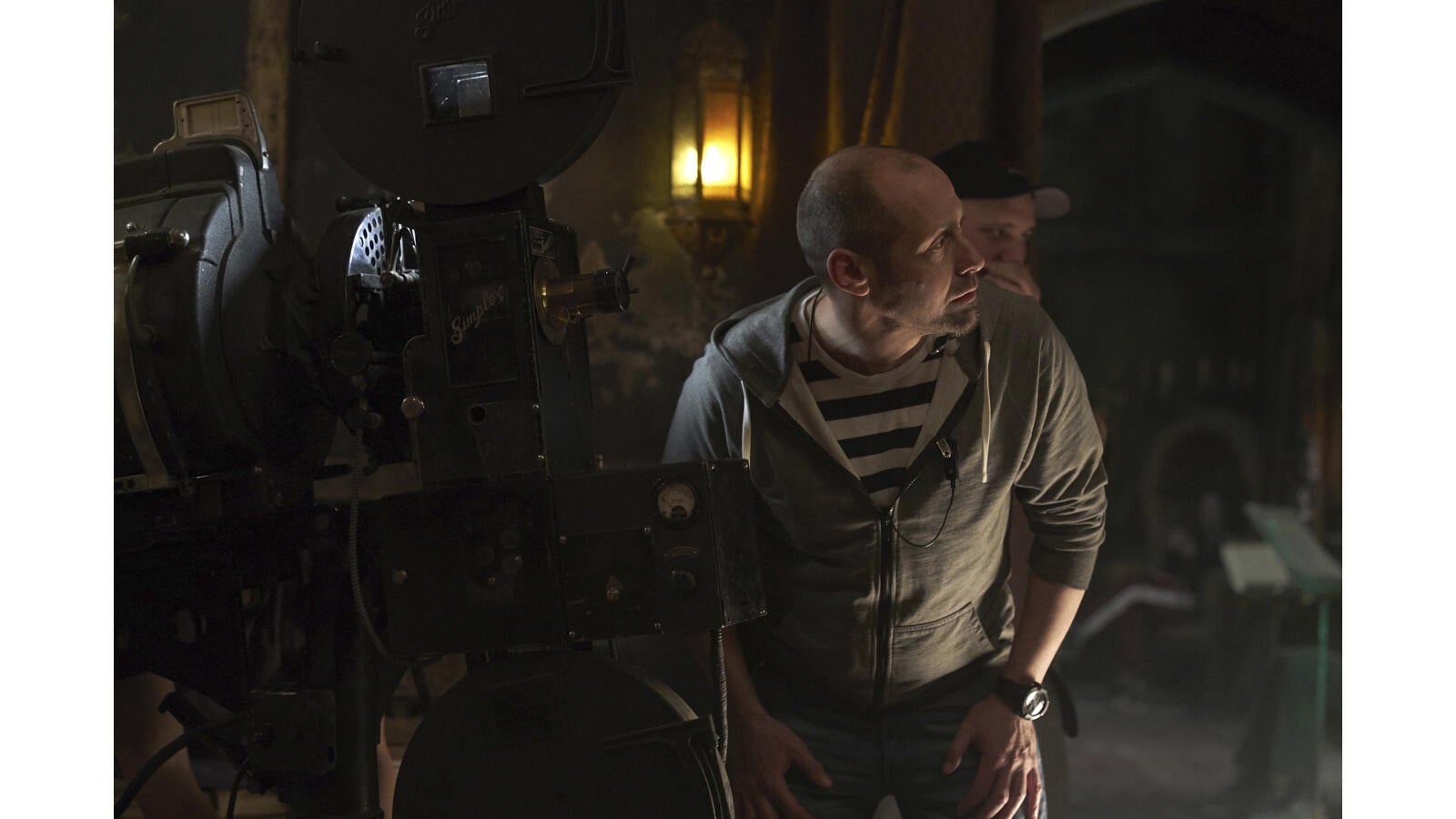 DP Stipsen checking on some lighting 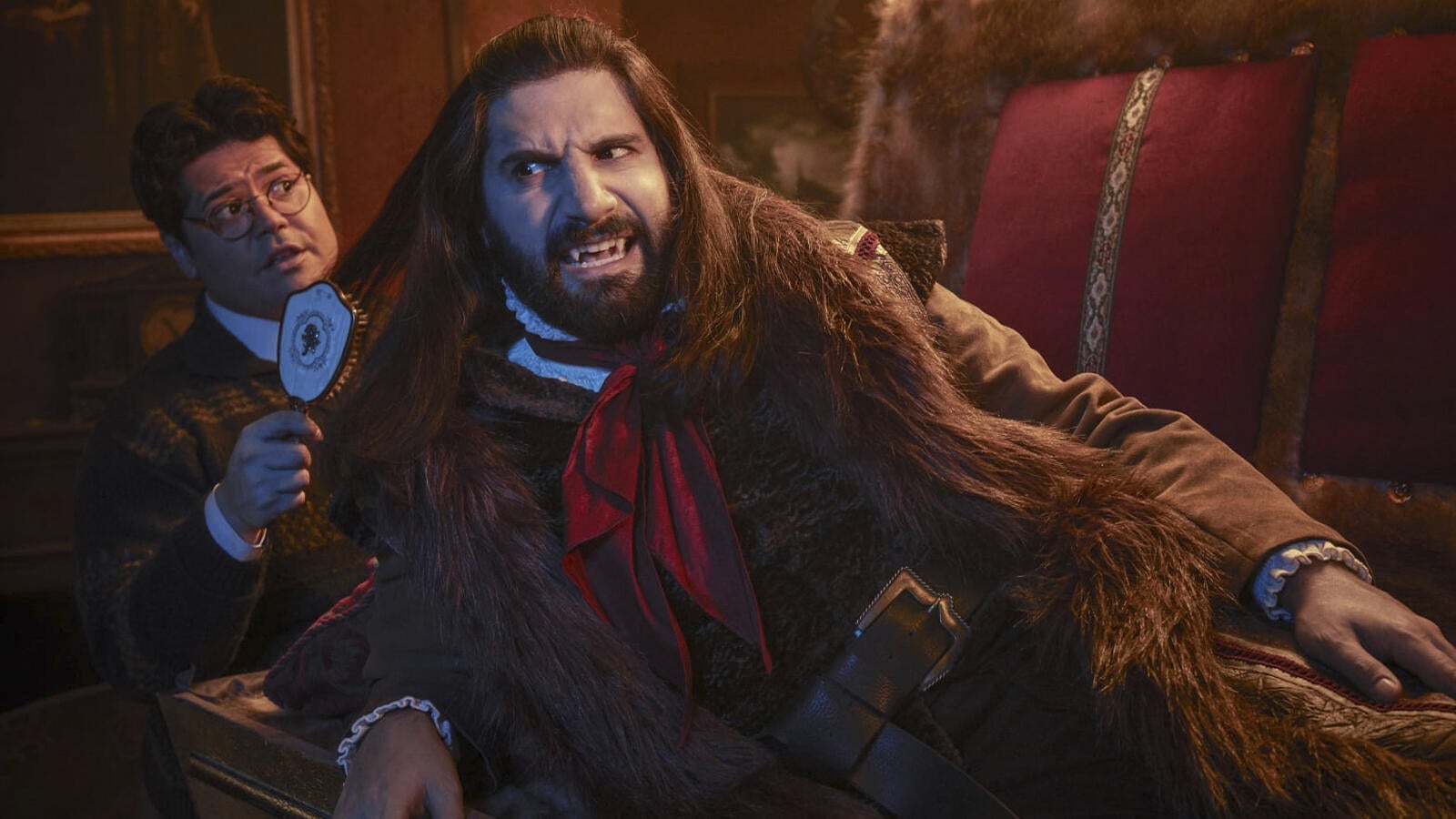