DP Tony C. Miller Combines Lenses From the 1950s With the Sony VENICE to Make Tanqueray's Gin Stand Out

British cinematographer Tony C. Miller has made a name for himself with slick visuals featuring three-dimensional lighting. From his work on music videos with globally recognized artists such as Ellie Goulding, the Saturdays, and Eric Clapton, to his commercial work for brands like Versace, and Jaguar, one thing you won't get from Miller is a cookie cutter look.

As the son of gaffer Barry Miller (2001: A Space Odyssey) and a former camera and lighting tech, we talked to Miller about his path to filmmaking and his latest commercial work for Tanqueray Gin.

Tanya Lyon: Before we go into your super awesome commercial, tell me about yourself. How long have you been shooting? What types of projects do you primarily work on?

Tony Miller:  I've been in the film industry pretty much my whole life. I got a degree in film in the UK. After that, I went and worked at ARRI for a little while just to familiarize myself with the cameras and do lens collimations and all that. Then I started working at a lighting company, the Electric Light Company, to learn about film lighting. After that, I became a gaffer. I was a gaffer for about ten years before I started DOPing. I've now been DOPing for about 14 years. I do a lot of beauty ads, car ads, a lot of products ads, and quite a few drinks products. Fortunate enough to be in the higher end of the advertising market. Get to go lots of fun places and shoot lots of fun things - so happy days.

TL: Your work is beautiful. Is there anything you've worked on that when you look back, you've thought, 'this is quintessential Tony Miller? This is what I'm known for.'

TCM: One of my early pieces of work that got me recognized was quite early on in my DOPing career. I did a fashion film for River Island, it was quite a few years ago now. That was the first time I used a Steadicam. We did the whole thing in a single shot. It got a lot of notoriety and ended up taking me to the States, to Canada, shooting more and more fashion and beauty work. So I think that was probably one of the jobs that launched me, which made me stand out from the crowd a bit. But outside of that, I think the thing I'm probably known for mostly is my lighting. I came from a gaffing background, so I've always had strong roots in the lighting of my cinematography. 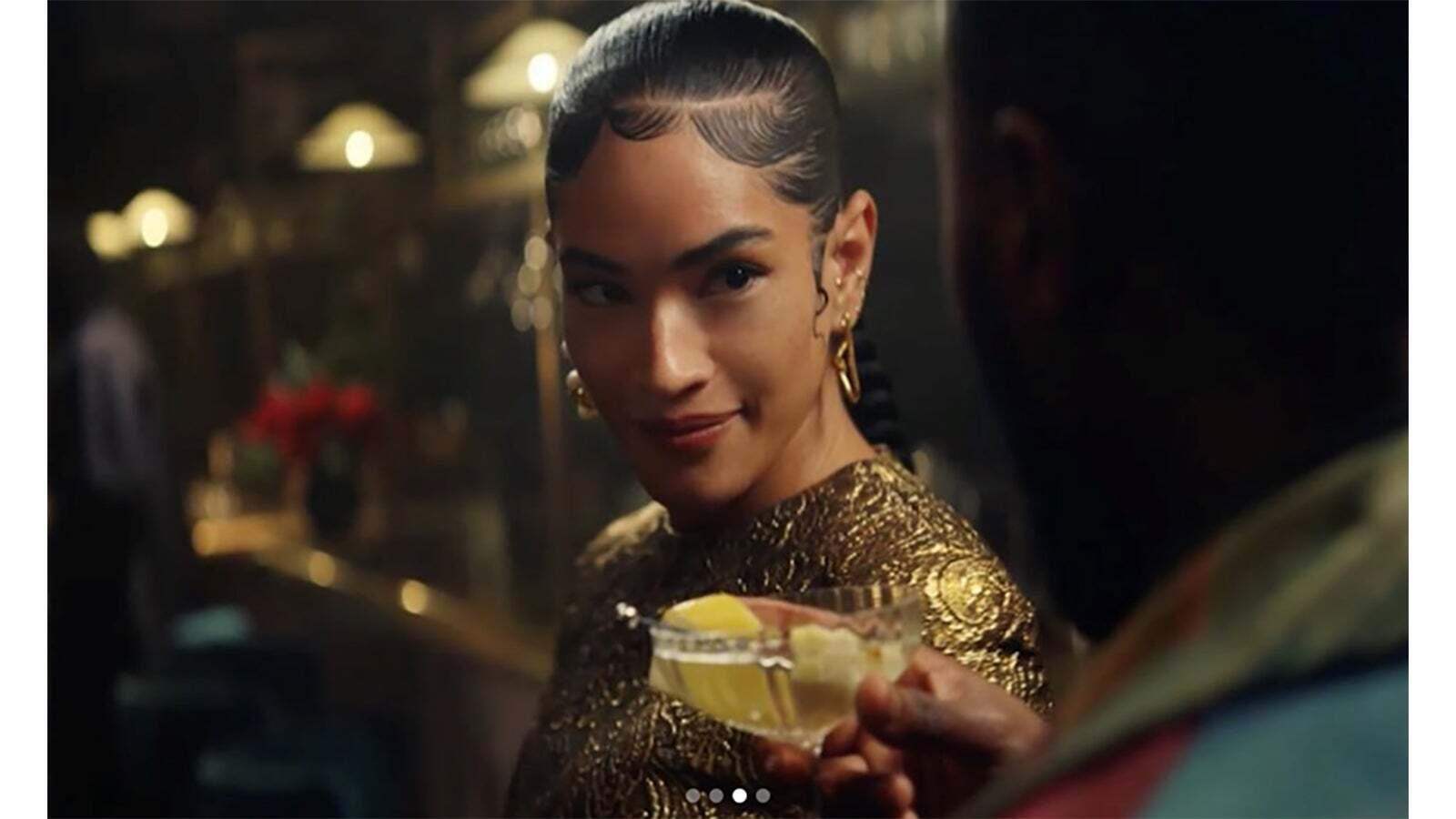 TL: Now, let's talk about your Tanqueray commercial. Where did you get the inspiration for the look of this commercial?

TCM:  I had a long chat with Jordan Scott, the director, and we wanted it to feel romantic and dreamy in its aesthetic but still have a contemporary, modern sort of look to go with the pairing with House of Gucci and Tanqueray. I really wanted to go with something richly cinematic. There was a set of lenses that I've tested a few times that I've been itching to get my hands on for a long time. Adam Coles down at Panavision was kind enough to let me use their Auto Panatars, which have a 1.25 squeeze large-format anamorphic that worked particularly well with the Sony VENICE at its 6K settings. I think the pairing of that large format sensor with these 1.25 squeeze glass gives you such a rich, creamy, nicely cinematic look. 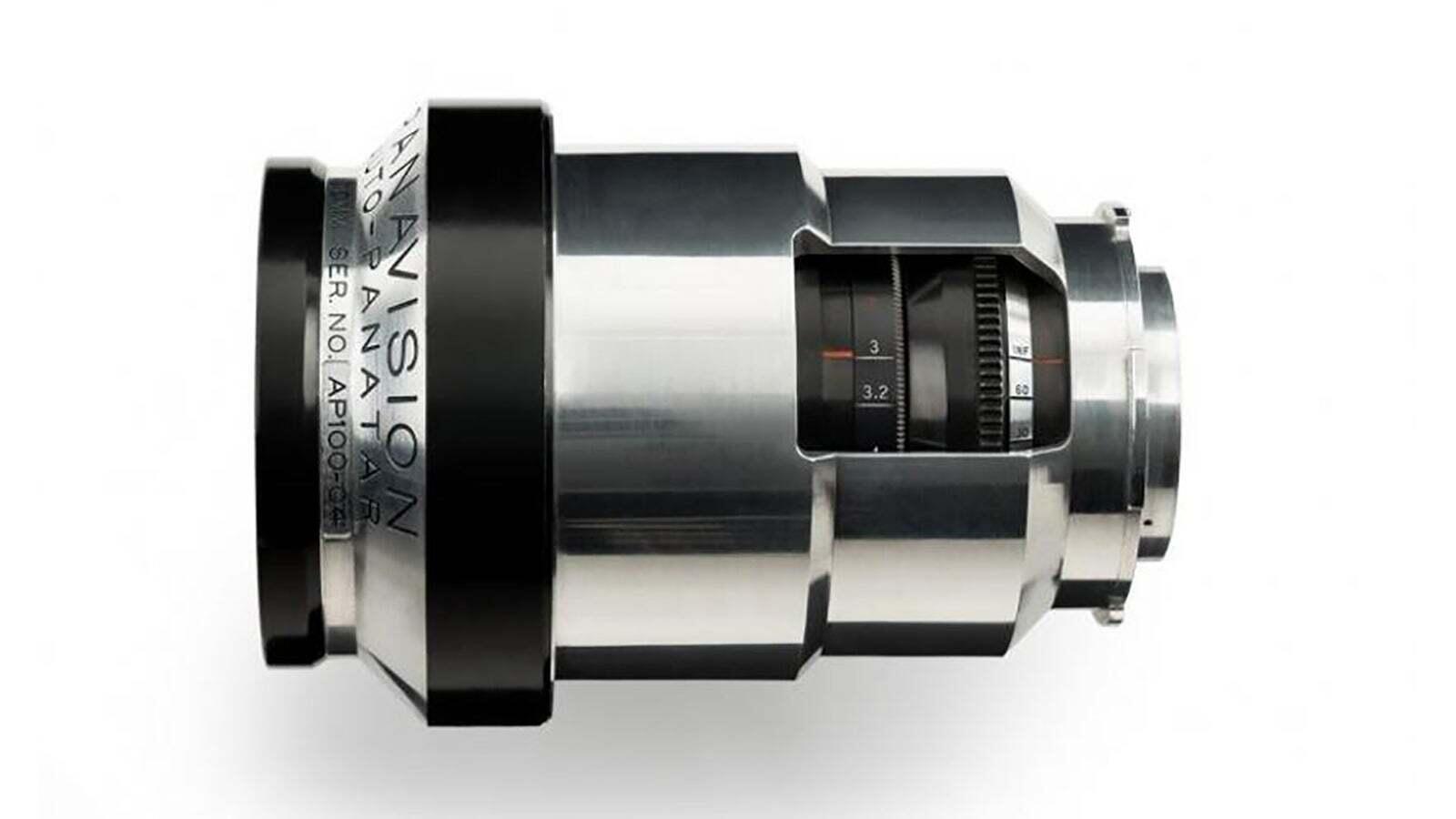 TL: These lenses are vintage and pretty unique.

TCM: They were made in the 1950s. One of the lenses, the 150mm, has a slanted prism on its front. It's the most unusual lens I've ever shot on and absolutely stunning. Again, the out-of-focus bokeh in the background with the slightly elliptical shape is not obviously as strong as a 2x anamorphic, but it just gives such character, fall off and depth to the image that I think it really made the ad stand out. 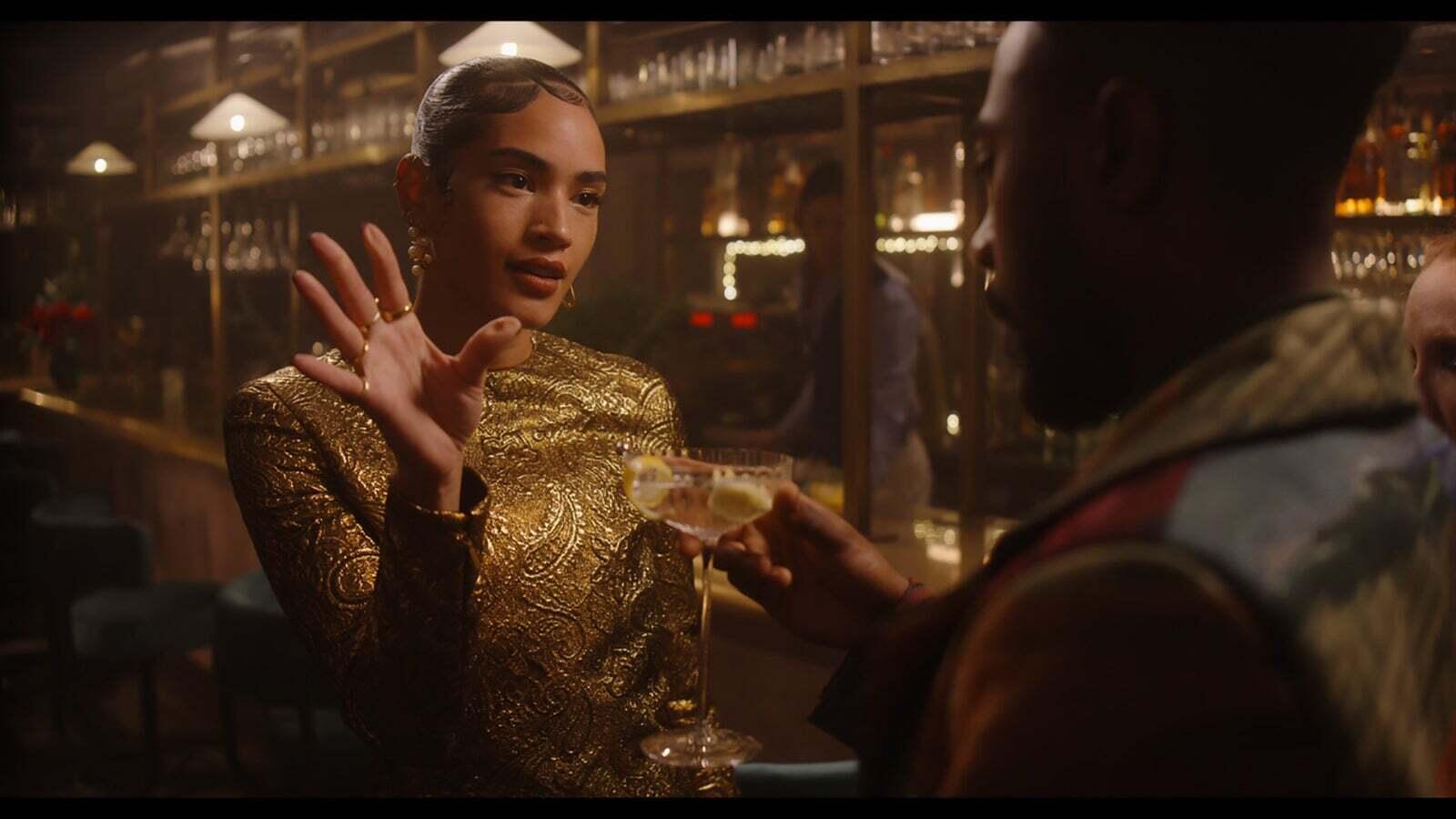 TL: I thought the colors were so vivid in the commercial as well without being too hard or garish. Did you look at any other films or art that inspired you on how you wanted that final look?

TCM: Well, I think a lot of the color space came from the location. We had this rich brass worktop, and our main model had a brassy, goldy top on, so all those warm tones and the color temperature I ended up shooting at really made the richness of the metal, the glossiness of the fabrics, all sit together. And I had a fair amount of cracked oil in the room just to give us that hazy atmosphere to give the shadows a little bit of texture and depth, all the backlights had a bit of volumetric light in them. So the whole imagery is all crafted around having a lot of texture and depth without it just being just black and white contrast. There are a lot of midtones that all work around that. But because of all the metallic surfaces, you get a nice amount of highlights out of it as well, and I paired that with a lot of the practicals in the back of the shop, which worked really well with the bokeh that the glass was providing us.

TL: Where did you shoot the commercial, and how long did it take?

TCM: We shot for two days in a bar in Central London. We had one day to prep and light the space, because we filmed it in the daytime, but needed it to have a nighttime aesthetic. So we had to do a lot of blacking out, and I rigged in some Kino Flos, Dados, and some hard sources of tungsten lighting - just enough to wrap around and give the actors some nice three-dimensionality, some depth, and texture across the scene. But the physical shooting we did in just one day. 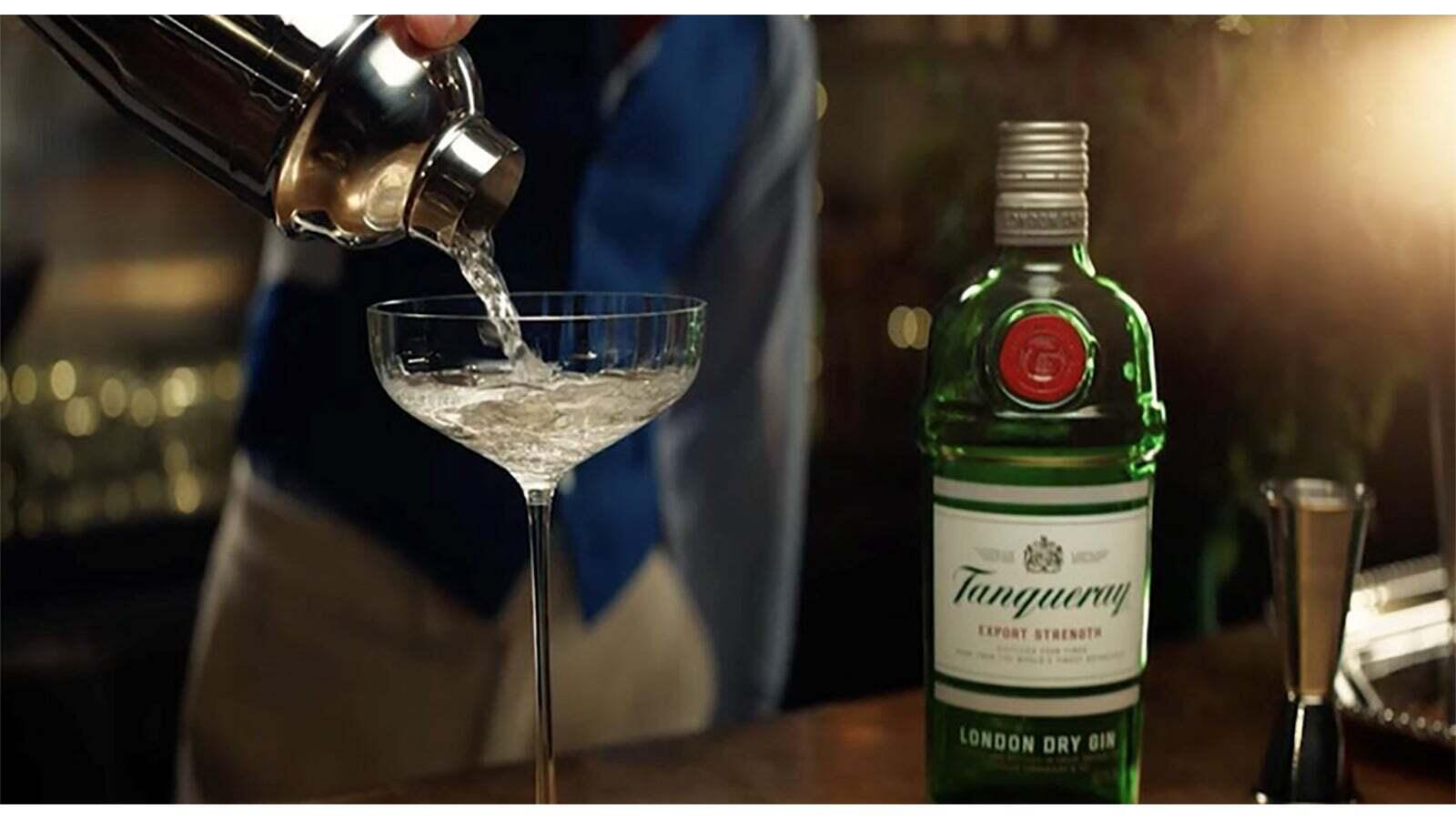 TL: One thing I noticed was the skin tones. It struck me was how beautiful everyone's skin tone looked in the film. Was that a result of the glass combined with the camera?

TCM: I think it's the combination of the very old 1950s glass paired with the Sony VENICE’s large format sensor, allowing all the character of the glass to be captured, so you get all that nice, subtle vignetting and fall off on the edges of the frame and how it actually prints the color space of all the subtle tones and ranges of what we are getting from the lighting and the skin tones. I think that the high-end modern cinema sensor and very old 1950s glass pair together well to give you such strong, beautiful cinematic images.

TL: What ISO setting did you shoot on?

TCM: With the Sony VENICE, my go-to setting is normally 2500 ISO, but this time I set the camera at 1250 - so I've got an extra stop in the blacks to play with. So I'm never in any danger of getting too much noise in the image, and it allows me to work with a lower light level. You can see in the film the role of all the practical lights that run down the bar. That's all just household bulbs. We didn't have to augment them at all. One of the things that makes the Sony VENICE my go-to camera is that ISO setting. It opens so much more flexibility, particularly when you're shooting on location, and you want to use some of the available ambient lighting that's on location. 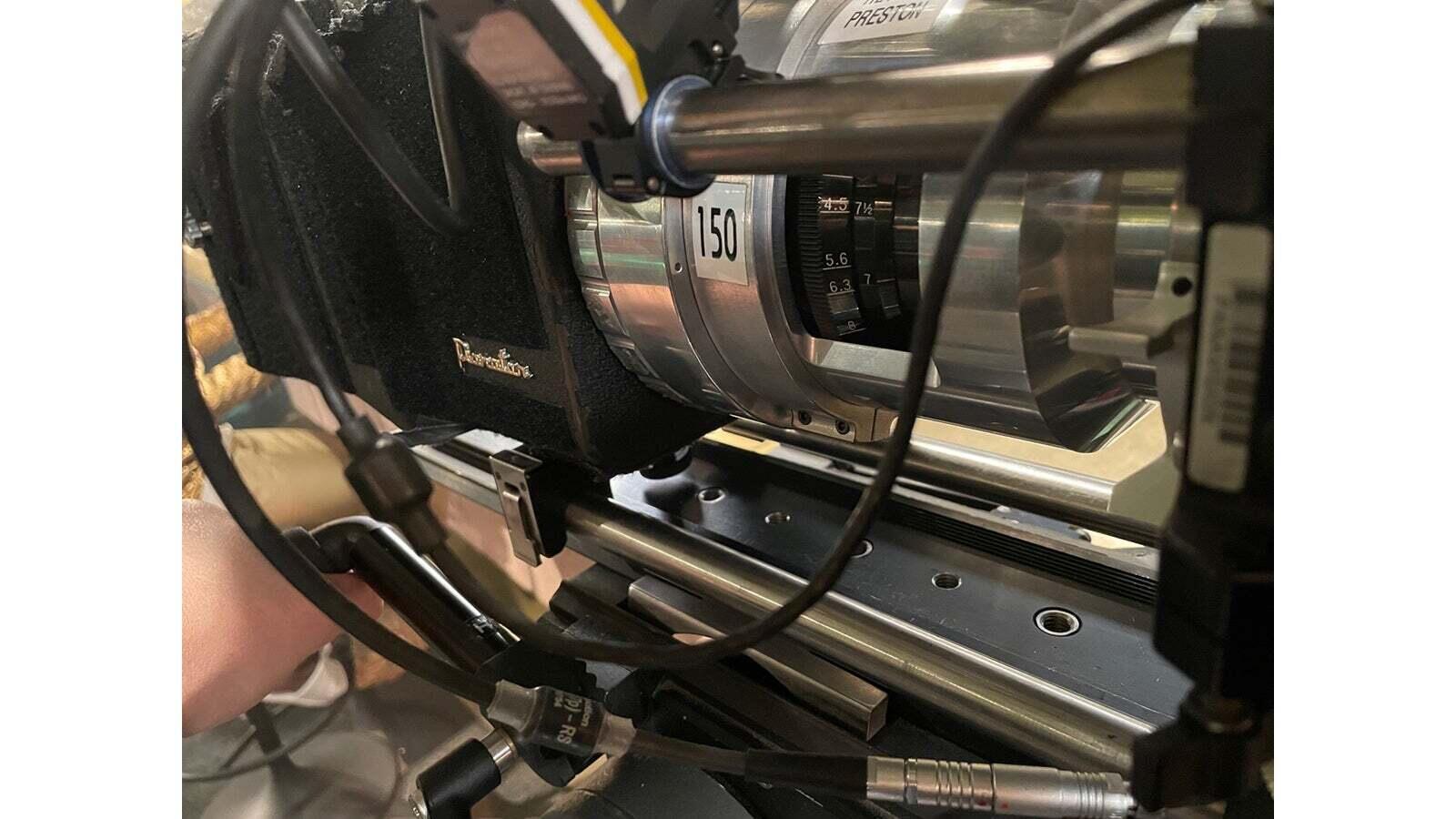 TL: Was this the first time you shot on the Sony Venice?

TCM: No, it's my go-to camera. I did another ad recently for Aston Martin which I shot on the VENICE. I used it in Rialto mode often, when I did handheld work, it just makes it so super lightweight and easy to manipulate. I've been hanging off the side of low loaders with an easy rig and the Rialto just skimming on the concrete on test tracks being chased by Aston Martins and Rolls-Royces. I also do a lot of car work with the VENICE on Russian arms and love the ability to have that large format anamorphic. Now I'm super, super curious about the Sony VENICE 2 and would love to get my hands on one as soon as one's available in the UK.