SonyCine.com recently chatted with drone pilot and DP George Watts about flying an FX6 mounted to an FPV drone through the skies of Sedona, Arizona for Ferrari.

Tell me a little bit about your background. How long have you been shooting?

I'm a DP and have been in video production for about 10 years. I got into FPV (first-person view flying) when COVID, like everything else, slowed down. I had been seeing things about FPV on Instagram and thought, I need to figure out how to do this on a cinema camera, or a Sony camera. I wanted to fly something other than a GoPro.

So it's actually only been about a year and a half that I’m flying FPV, but because it was COVID, I was flying every day for a year and before, like I knew it, I was working with a company called Xhover developing a cinema drone. We were one of the first to put a cinema camera on an FPV drone. 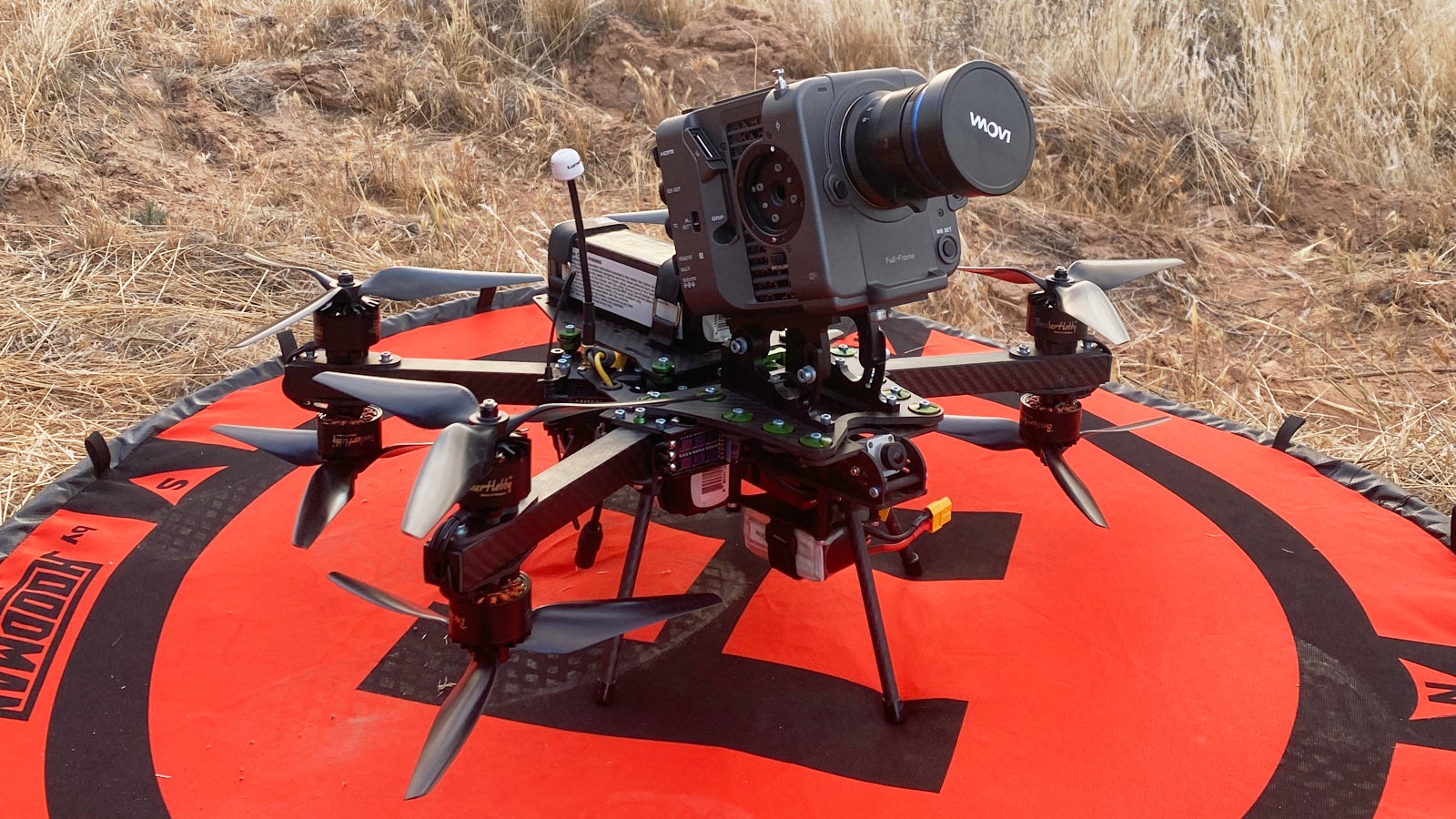 The shots are very cinematic. What do you look for when flying an FPV, and why was the FX6 was the right camera for this project?

For this job our goal was to connect the environment to the car. And FPV is really cool because you can chase a car and get really cool shots. In our industry we call it surfing, which is basically flying around landscapes.

It's all about timing. Like the shot where we come over a cliff and reveal the road in the background, and then dive down and the car drives under the drone. Getting that perfect shot might take four or five tries.

I wanted to use the FX6 for this shoot because the payload of our drone is four or five pounds and the FX6 with a lens is just about three pounds. So we're underweight and that really helps performance. For an FPV, it's the only camera with internal ND that can shoot 4k 120 at a really high bit rate. And due to its light weight with battery, we got about five minutes of flight time. 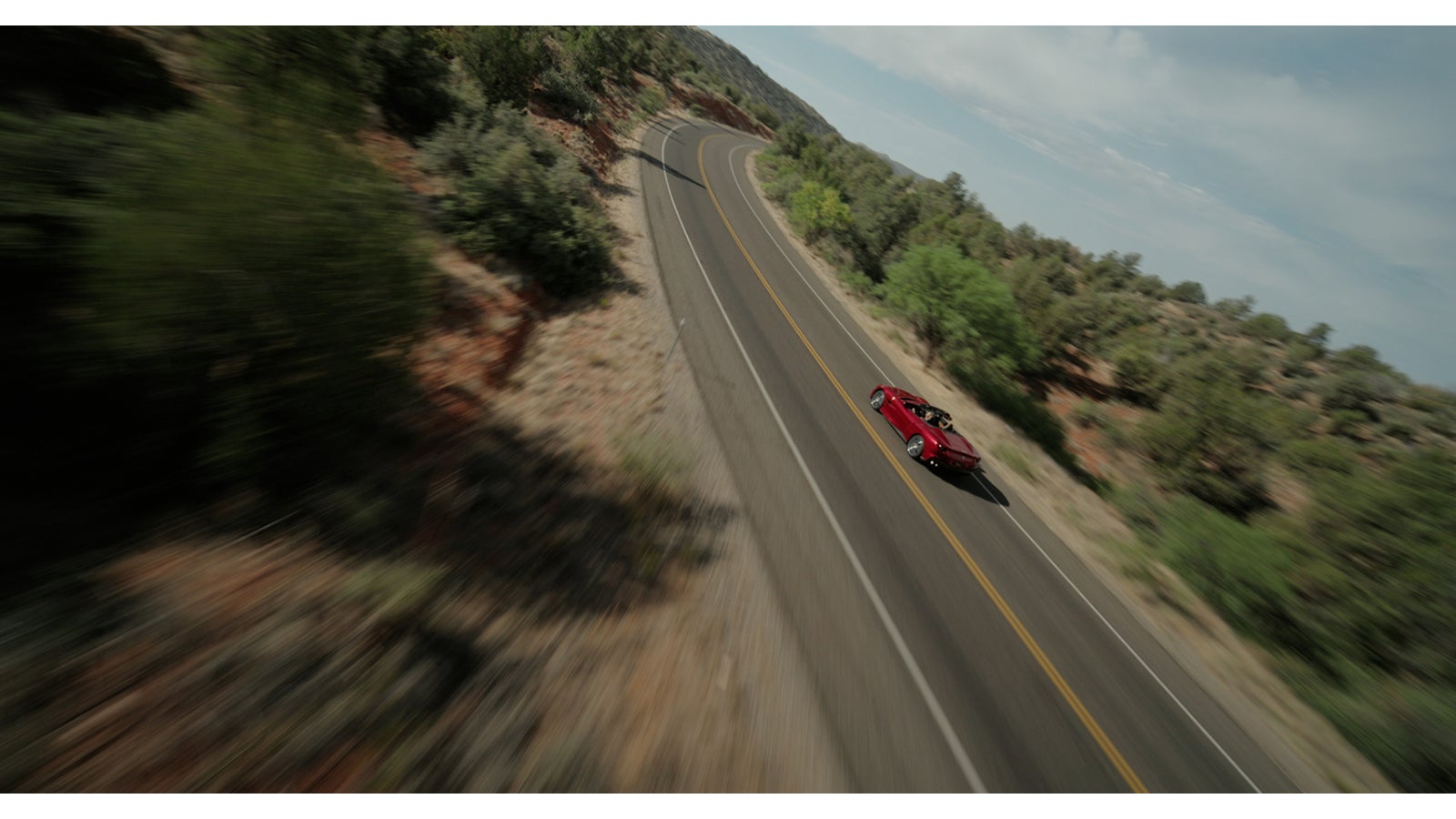 What was the set up for the shoot? I see you also have a car with a Russian Arm for some of the shots.

Yes, we had a black Porsche SUV with a large Russian Arm. We also had cameras on sticks and the FPV. We did some handheld as well. It was a fairly large crew. We dedicated one full day to flying FPV.

Why did you choose the FX6?

I'm really excited about the FX6. it is literally the smallest full-frame cinema camera with a fixed sensor that has internal ND, and I can put a PL Mount lens on it.

I also have and use E mount primes from Sony and Laowa. I just love Sony. I love the new color that the FX6 is giving me. I've been shooting them for a while and I know how to color grade S-Log3 and it’s just a great image right out the bag.

I think it’s unbelievable that we can take a camera like the FX6 and put it on a high-speed drone capable of carrying it at up to a hundred miles per hour and get shots that we can use in commercial and feature films. Before cameras like the FX6, there wasn't anything that was Netflix approved for this. There wasn't anything like this that you could bring onto a feature film.

You’re now talking about being able to get shots that literally have never been done before. This is what cinematographers and directors want, to get shots that have never been done before. We can now say, Hey, I've got this drone and this new Sony camera. I can film 120 frames a second in 4K, so let's go fly and get this crazy shot that I've never seen anyone else do. That's what's exciting to me. It's so fresh.

I love it when people say, How did you get that shot? Because they may not have seen FPV before, and every time people see this in person, to them it's mind blowing. It blows their mind because I’ll hover the FX6 a few feet off the ground, give the drone full throttle and very quickly I'm flying at almost a hundred miles per hour, within seconds. So we put two bolts in the bottom of our FX6 to keep it on there. You don't want to lose it. And this is kind of a sidetrack but back to the specifications, like the internal ND and the fact that we can use Catalyst Browse in post is just unreal. This isn't available anywhere else. No other company is doing this.

These shots are stunning.

Thank you. I appreciate that. And that's totally what it’s about. The FX6 is literally a perfect drone camera. To be able to put PL Mount glass and, you know, everything comes in E mount glass these days. I even have Zeiss Contax cinema lenses where I can put my 18mm on there and it looks gorgeous.