30 years after the fall of the Berlin Wall, BMW recounts the story of the desire for freedom in the short film “The Small Escape.” Shot in Budapest, Hungary by New York-based cinematographer Khalid Mohtaseb on the Sony VENICE with Master Anamorphics and Hawk V-Plus 50 & 75.

Jeff Berlin: So, let's talk a little bit about the BMW project. I understand that you’ve shot quite a few car commercials.

Khalid Mohtaseb: Yes, I have. I also took a little leave from car commercials because I didn't want to get buried in that world, because my ultimate goal is to shoot features. And as you know, it's very easy to kind of get buried in the car world.

Khalid: So I went about a year not doing many car commercials. I only did a few special ones, but when I read the script [for this film] I said, my goodness this is a huge responsibility, and how could you turn that down? I knew it wasn't promoting a car, it was promoting the 30 year anniversary of the Berlin Wall and freedom. It's like a DP's dream to shoot something like that.

Khalid: And then I found out that Alex Feil was directing it and I said man, I’d love to be involved in this project. So that's sort of how it came together. I just read it and I got on phone call with Alex for 15 minutes or so and I knew immediately that I would work well with him.

Jeff: Nice. So, as you saw my email, I drove to Berlin for a weekend while I was shooting in Munich and went through Checkpoint Charlie, from East Berlin to West, right after the wall opened. And that's one of the reasons this film really resonates with me. I’ve seen that place in action. And the history, of course.

Jeff: So having seen what the Berlin Wall looked like right after it opened, and having been there, and crossed it, how did you recreate that world?

Khalid: Well, here is the thing man, when you get a project like this it's a period film that you know a lot of people are going to be watching, and not just watching but they're going to be pinpointing everything that wasn’t historically correct.

Khalid: So, the amount of research that the director Alex did was unbelievable. He researched it for many months and he knew every single detail, every little thing about that story. And the prep that I did, I came on much earlier as well and the amount of prep that I did also just in figuring out, for example, what lights they were using, what practicals where on the streets, what type of street lamps there were then, were they sodium vapor? What did they look like? We were all trying to be as historically correct as possible. 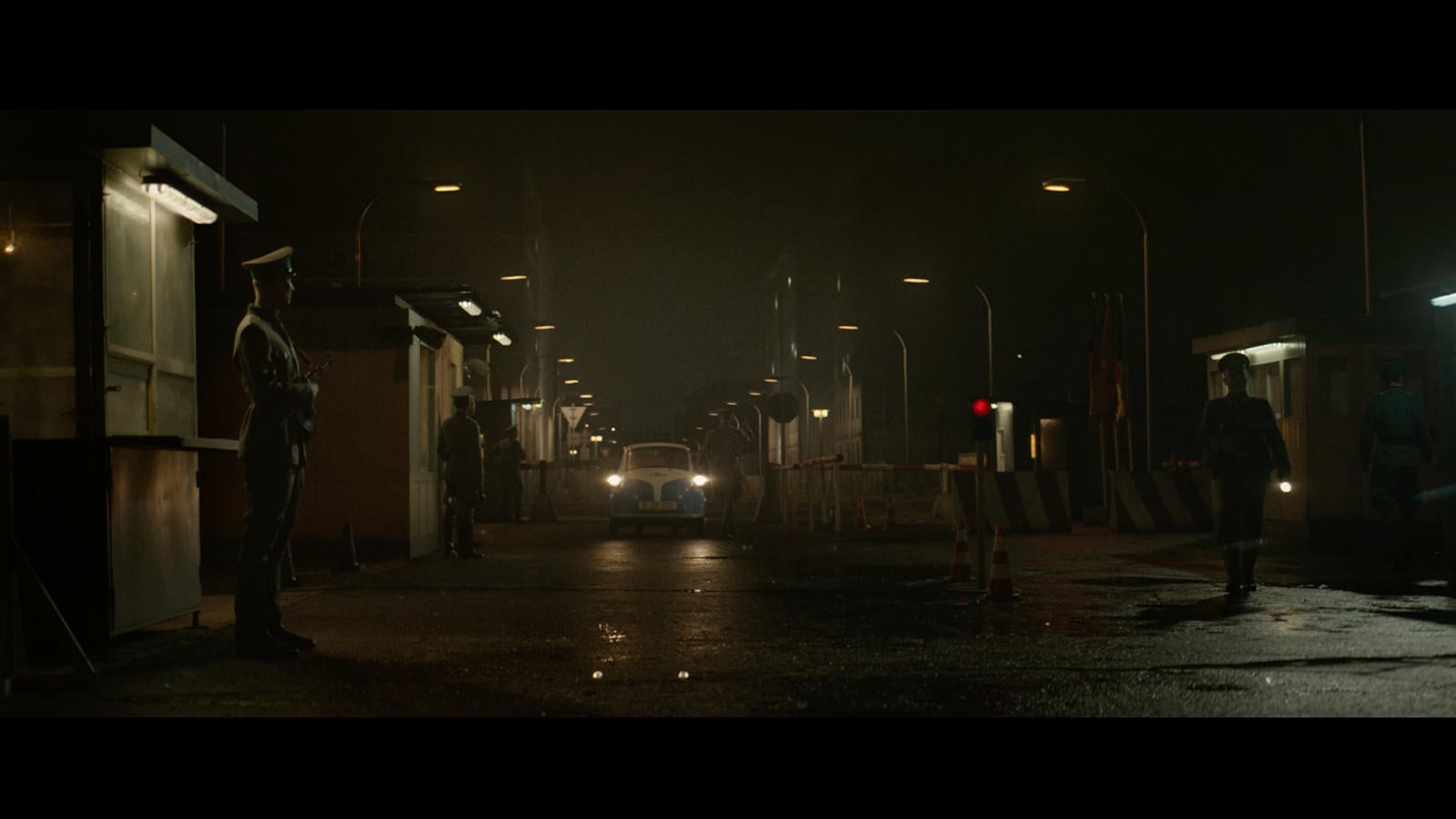 Jeff: And what were the bulbs in them? What kind of light did they throw?

Khalid: Well, Gaffer Filip Marek and I had to change them to sodium vapor because that's mostly what they were, and some were mercury vapor.

Khalid: Yeah, and that became where the motivation of the light came from, from those street lamps.

Jeff: So you were really taking advantage of the high ISO capabilities, the low-light capabilities of the VENICE.

Khalid: Oh man, for sure, absolutely. There were tons of shots in there where we used 2500 ISO, and even 500 base pushed to 1600. I mean I, I kind of like the noise that comes out that camera. I wouldn't even consider it noise, I would consider it grain.

Khalid: There’s also an application called LiveGrain that we used.

Jeff: Tell me about LiveGrain.

Khalid: LiveGrain is a grain interface for Resolve or other coloring tools. The owner, Suny Behar, is a friend so when I got the project I called him and said, "Hey, I got this project about the Berlin wall and it really needs that touch of grain." And he was completely on board. He spent many years of his career developing it.

Khalid: Almost every feature that is shooting digital is using it.

Jeff: The grain in the piece looks great.

Khalid: Yes, it made it a huge difference in the look of the film. It's not like I wasn't already happy with the final image, but to give it a sort of extra texture, some extra three dimensionality, we used LiveGrain. 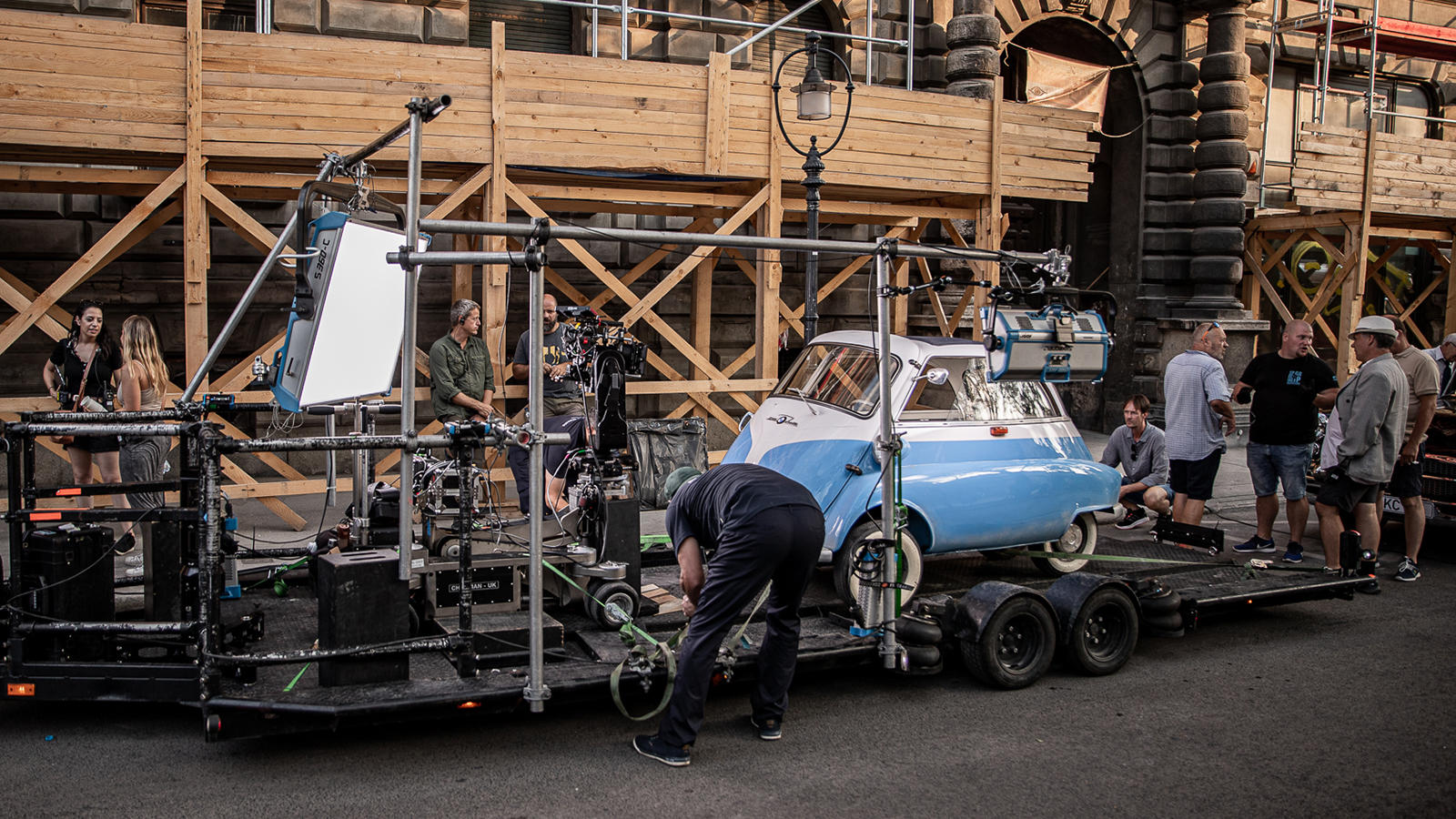 Jeff: Cool. So back to production design. BMW had the car and, I thought it was really powerful at the end when they showed the Wall Museum and the car in the museum there.

Jeff: So even the shots where you were driving through the streets during the daytime, looking back into the, into the car, you guys did a great job creating 1960’s Germany.

Khalid: A lot if it was set extensions. Stuff on the street was just finding the right location. We scouted for two weeks trying to find streets that look historically correct.

Khalid: We shot in Budapest, which was great because there are tons of streets there that haven't been renovated or really touched in 50 years or so. So there was the street, and then we had some period cars behind the [picture] car and then LiveGrain. I think LiveGrain made a huge impact in that scene specifically.

Jeff: Yeah, that's a beautiful scene. And then did you guys construct the checkpoint and the wall, I am assuming?

Khalid: Yeah it was a huge step. I gotta give a lot of props to Erwin Prib and his team. Erwin was the production designer. He’s extremely talented and really did his homework, and he was correct on everything. It was so impressive to watch him work because I would say something like, "can we push this building a little bit further down this way and put this type of lamp in front of it." And he'd say, "Look at this reference, this is exactly how Checkpoint Charlie looked. We should match it as close as possible." 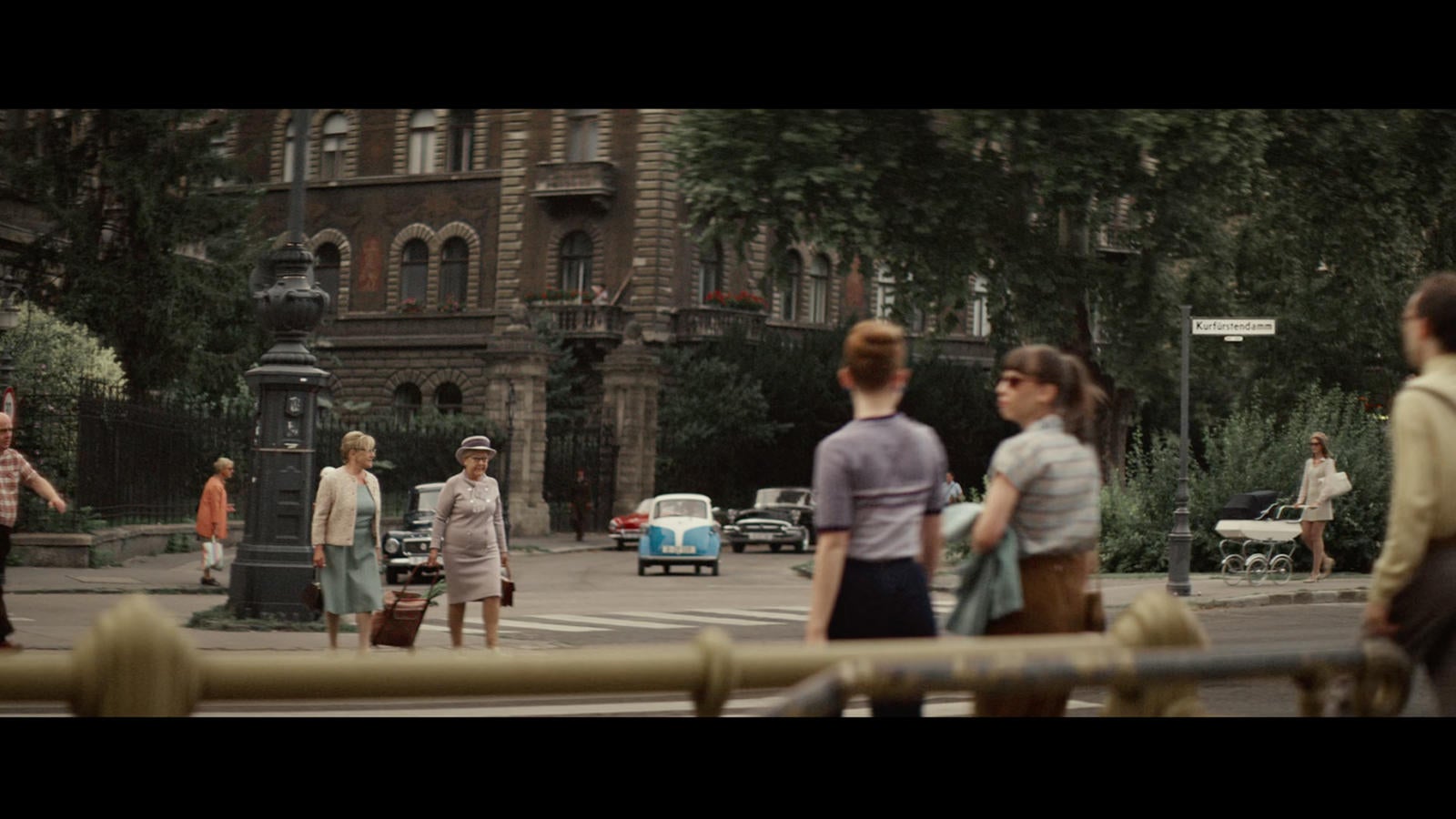 Khalid: Thanks. These were very large sets. Even the production designer was saying this is probably the largest set he’s ever done. We had almost 300 feet of wall and then the rest of it was set extensions. For Checkpoint Charlie, everything that was in the mid-ground, foreground and background was all real. Those little huts they constructed from scratch and really the only visual effect was the big building in the deep, deep background. There was no green screen at all.

Jeff: What would you say your main light was? Was it mostly the fixtures that you got in from Berlin or did you supplement that with condors or anything like that?

Khalid: There was a gigantic lighting set. Huge. We had four condors and the main source of light was dinos. I just used tungsten and dimmed the tungsten down and used sodium vapor gels. I think industrial vapor. I flew in a gaffer for the project, my gaffer from Prague. He’s one of the best in the world. His name is Filip Marek.

Khalid: We knew that we were going to look 360 when the car arrives in East Berlin and when he leaves East Berlin, and again when he arrives in West Berlin, so we had four condors, two on each side with, I believe, 24K dinos.

Khalid: We had a very big light source, sort of an overhead moonlight vibe that I also turned into tungsten because I just felt that it looked the most creatively correct. I didn't want to go with moonlight, I wanted it to look kind of ugly.

Khalid: So we used a 12x12 Sourcemaker LED Blanket light diffused and gelled as well.

Jeff: To be green?

Khalid: Yes, and same thing with the dinos on the right hand side, if you're looking at the camera, the right-hand side was sodium vapor and the one on the left-hand side was more like mercury vapor, kind of a greener, really kind of ugly looking light. 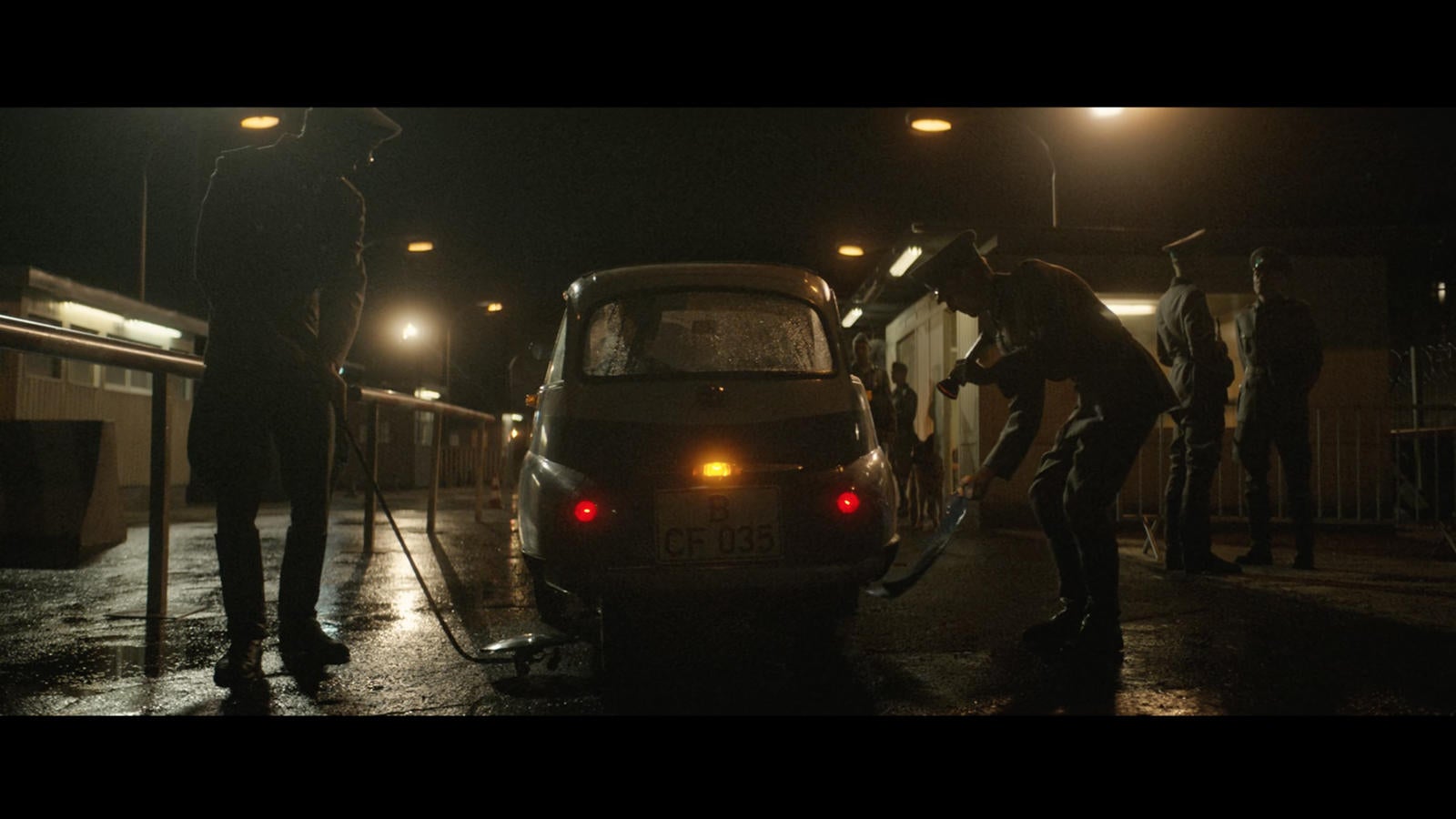 Jeff: Right. I mean the colors are beautiful. Where did you do your color timing for this?

Khalid: In L.A. and the colorist is someone that I adore. He colored my first feature, the one that was at Sundance last year, his name is Andrew Frances.

Khalid: And the reason why I pushed so hard is because for one, I knew that Andrew was going to bring something different to this, and two, because Technicolor has LiveGrain, and Technicolor also helped developed the color science of the VENICE. Andrew, our colorist at Technicolor brought so much to the table and wow, my goodness, how filmic this looks, and how period.

Jeff: So can I assume you recorded in XOCN-ST?

Jeff: Why did you decide on XT?

Khalid: Well, if you're shooting night exterior in low light and you're pushing the camera to 1600 ISO at times, not even because of the low light situation but because I just wanted to push it.

Jeff: And what about the grain that was introduced going from 500 to 1600? 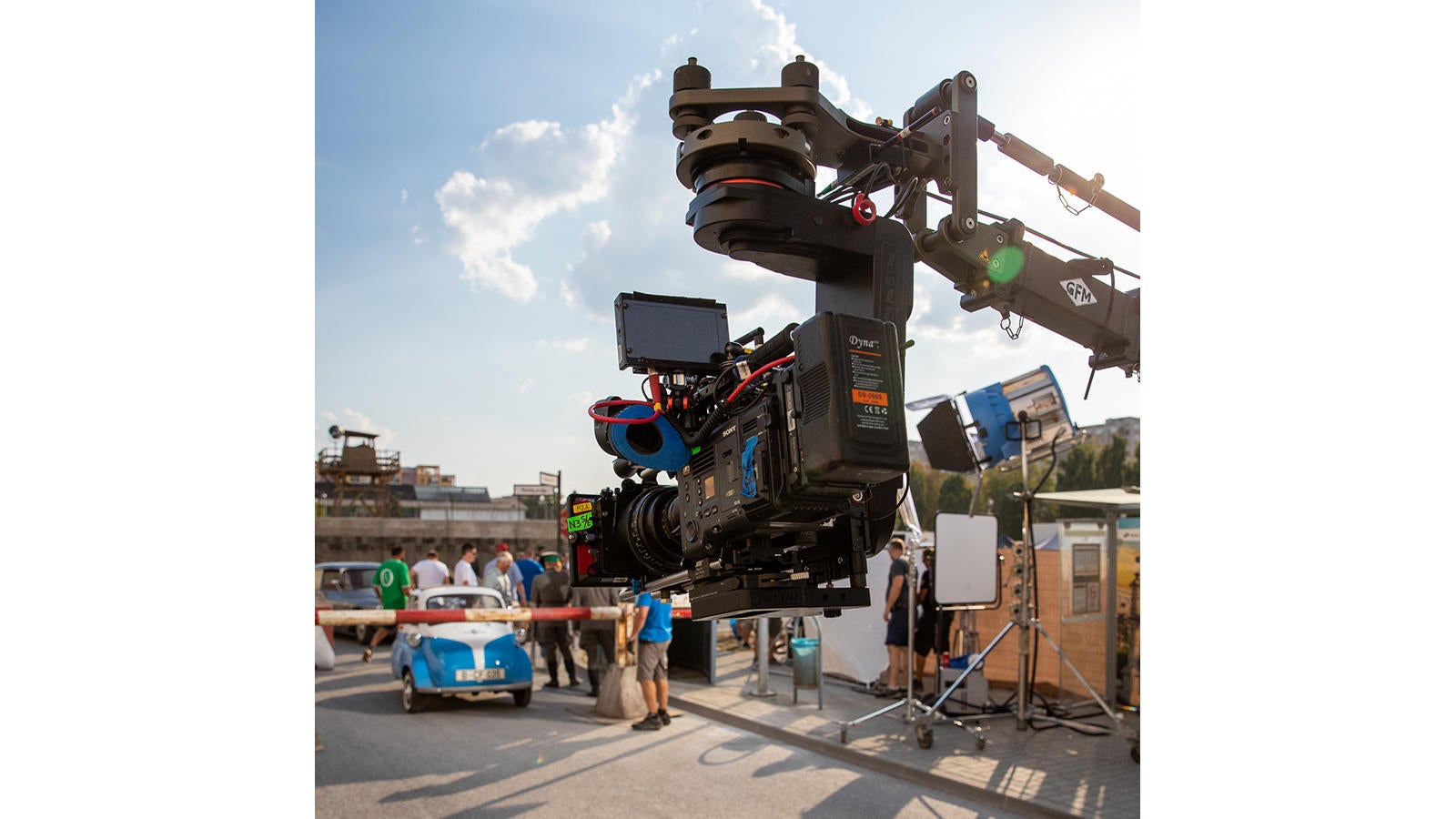 Jeff: Right, and ND down. The NDs in the camera really change how you operate the camera.

Khalid: Like when we're in tight spaces and we can't use a big body so we have the Rialto, or we want to shoot visual effects so we want raw files, or we're in low light, VENICE, we're in high noon, VENICE. I mean, there's really not an application, there's not a film that I can think of, that the VENICE wouldn't be perfect for.

Khalid: That's why I bought two of them, and I'm on my way to buying my third.

Jeff: Super cool. What lenses did you use on this project?

Khalid: I believe 90% of the film was actually shot on Master Anamorphics. When I spoke to Alex, he said, "I don't want to shoot on a vintage lenses. I don't want this to look like we shot it to look period, you know?" He said, "I want to shoot on newer lenses." And I loved that. That was sort of the way I saw it too. I am not into period films that look very heavily treated.

Khalid: So he wanted to shoot it on modern lenses and I'm a huge fan of the Master Anamorphics because they don't really look like anamorphics but they have that anamorphic aspect ratio.

Khalid: And they also are one of the fastest anamorphics, you can actually shoot them wide open and still be reasonably sharp.

Khalid: So we shot on the Master Anamorphics and then 2X Hawk V-Pluses, a 50mm and a 75mm, for a few shots that I felt needed to be shot with anamorphic bokeh. 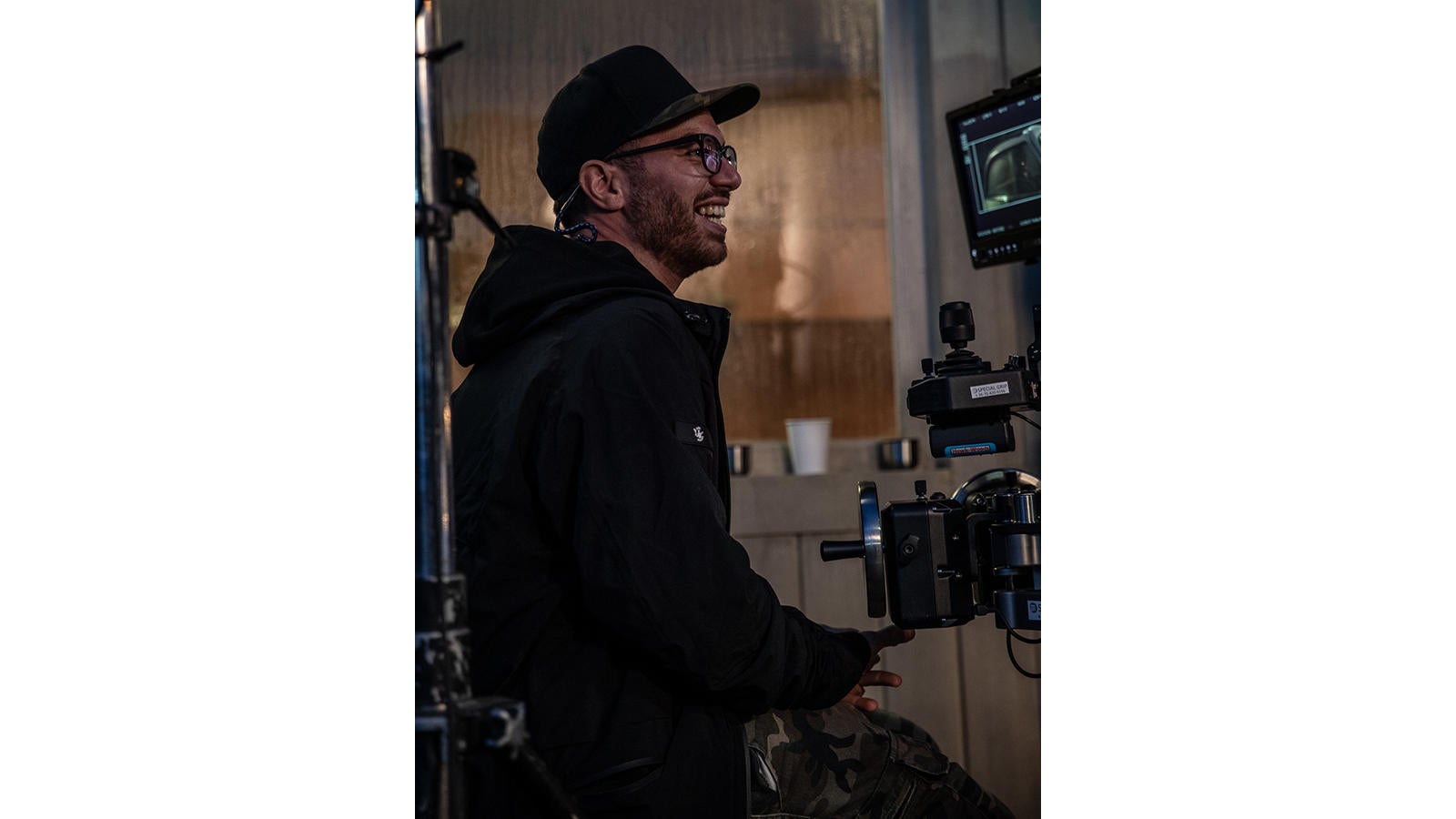 Jeff: Right, so have you ever tried the Servicevision Scorpio Full Frame anamorphics? Speaking of anamorphics that don’t really look like anamorphics.

Khalid: Yes, they are so great. How did you shoot them, in large format?

Jeff: Nice, yes, I’ve shot twice on them with my VENICE. I love them.

Khalid: What resolution were you shooting? Is it 3:2?

Jeff: It was giving us a 2.39. At any rate, that's a whole other conversation. For the BMW piece, did you use any filtration. Did you use any kind of filters?

Jeff: You should check out the Tiffen Black Diffusion FX. They're really nice.

Jeff: Yeah, for skin they're really nice. I use Black Pro-Mist as well but I’ve started using the Black Diffusion FX and they’re now my favorite for skin.

Khalid: And what's the difference?

Jeff: There's less halation in the light sources. They maintain contrast and are good on skin. Anything else about BMW?

Khalid: In terms of the BMW, I think we have covered every thing, really. 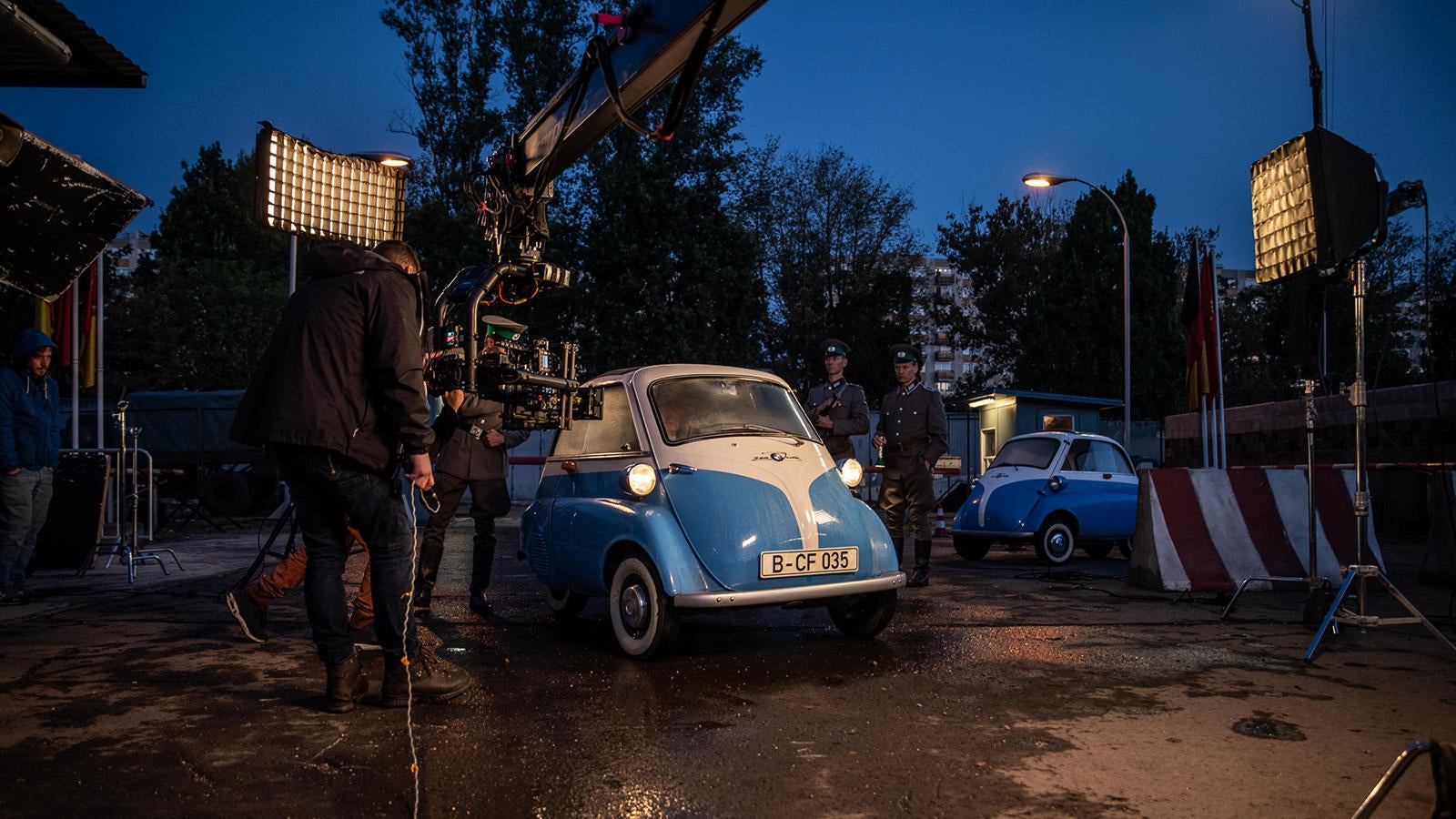 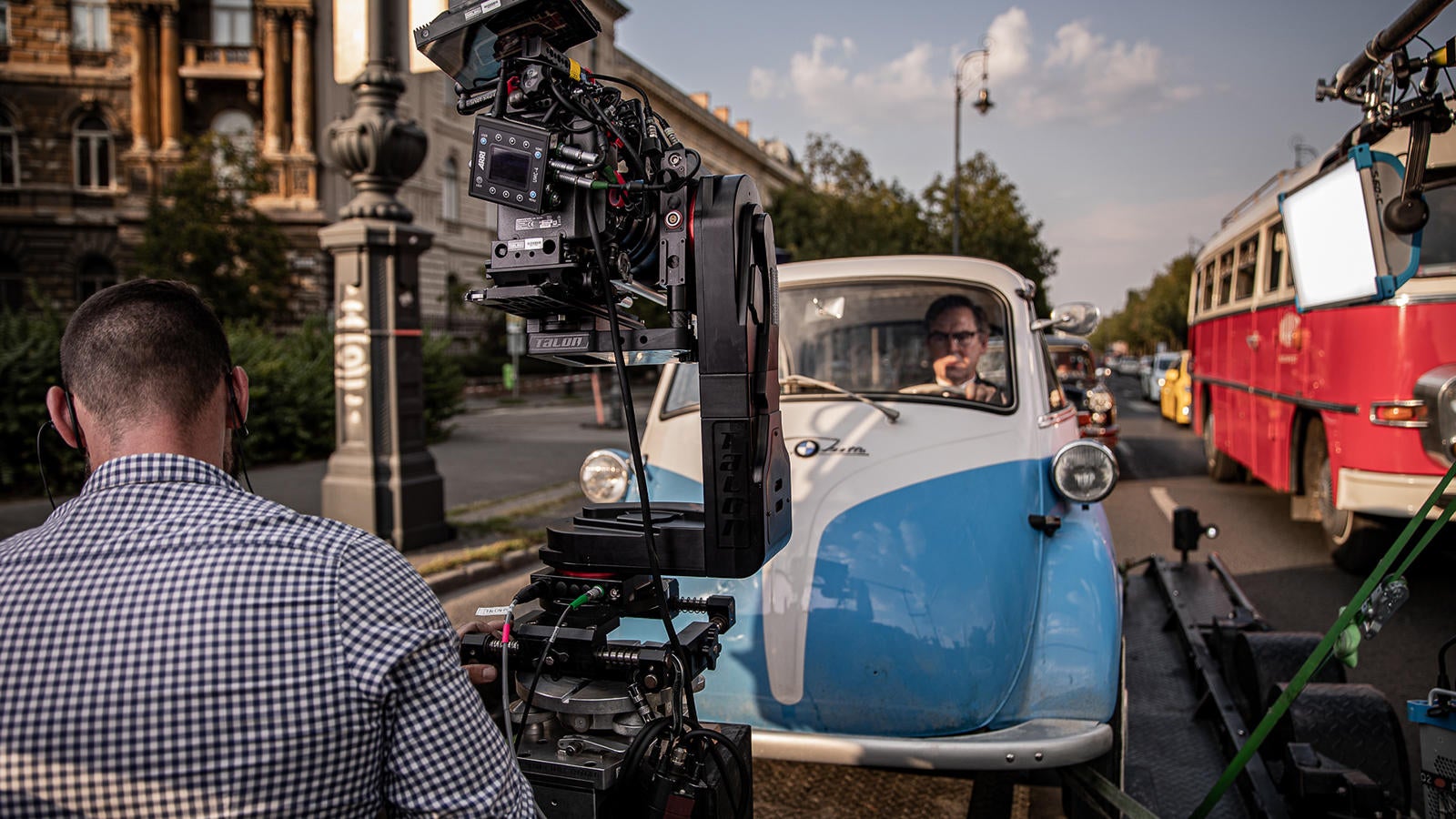 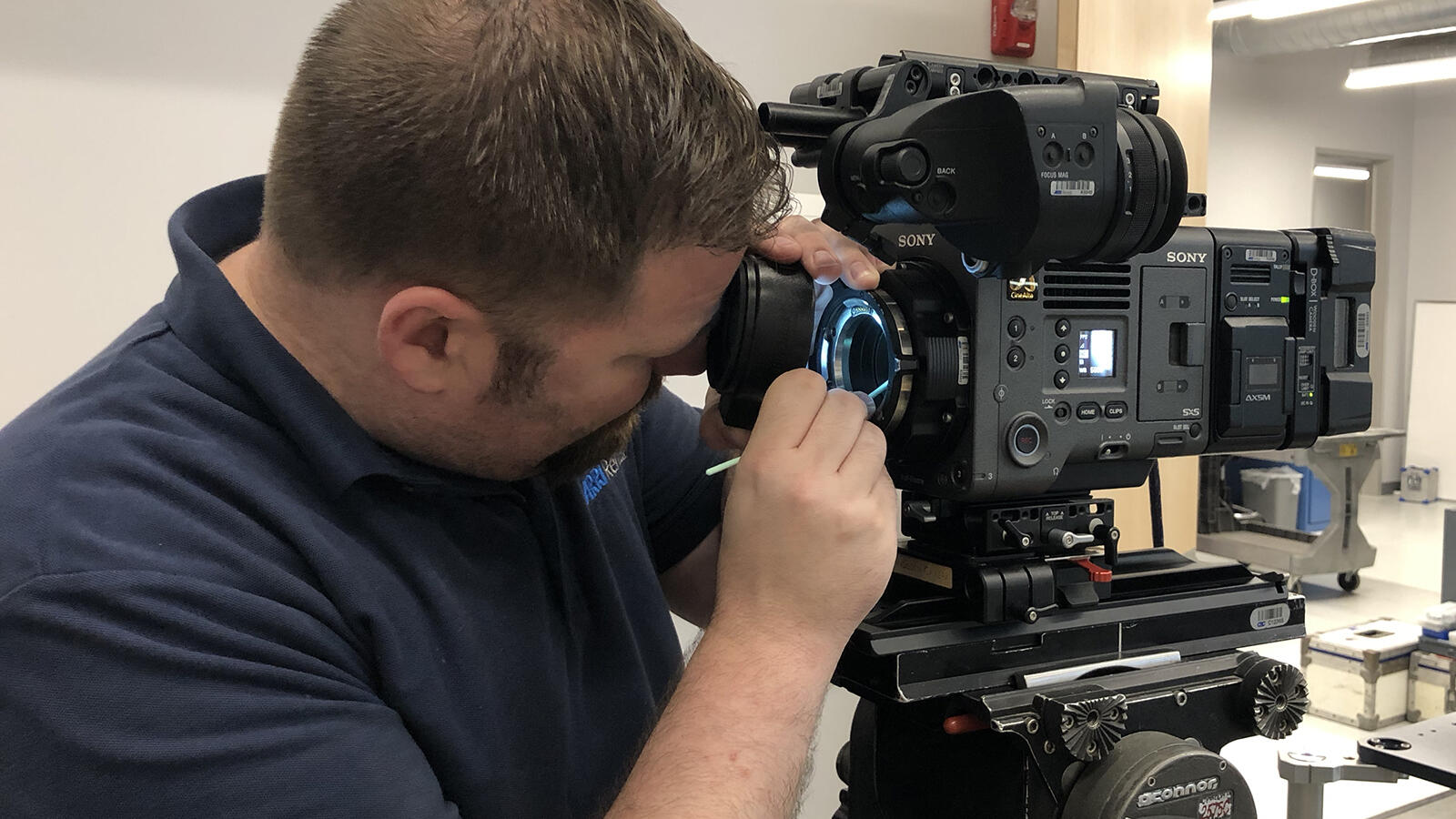 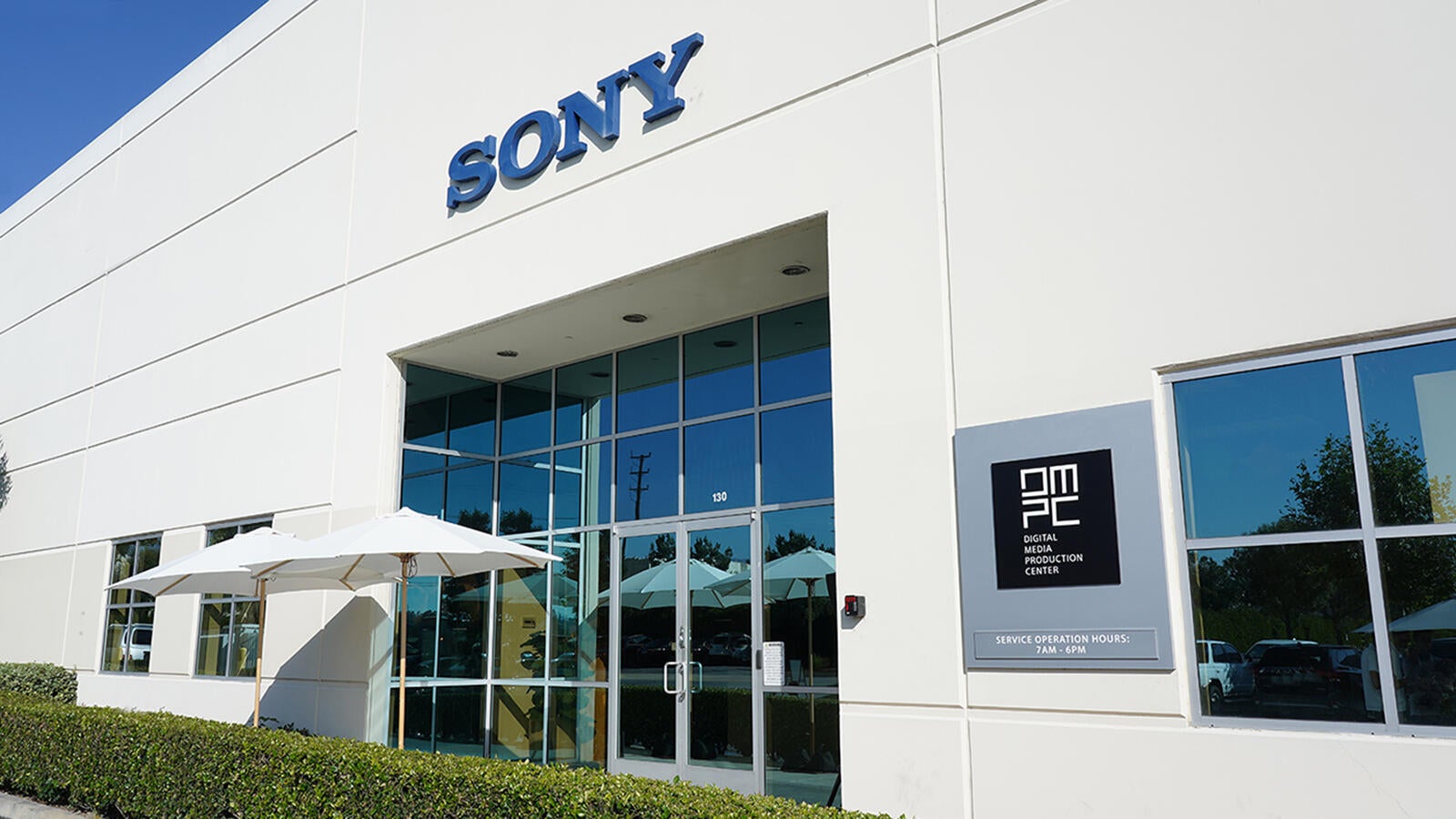 The Sony Cine Team Is Here for You 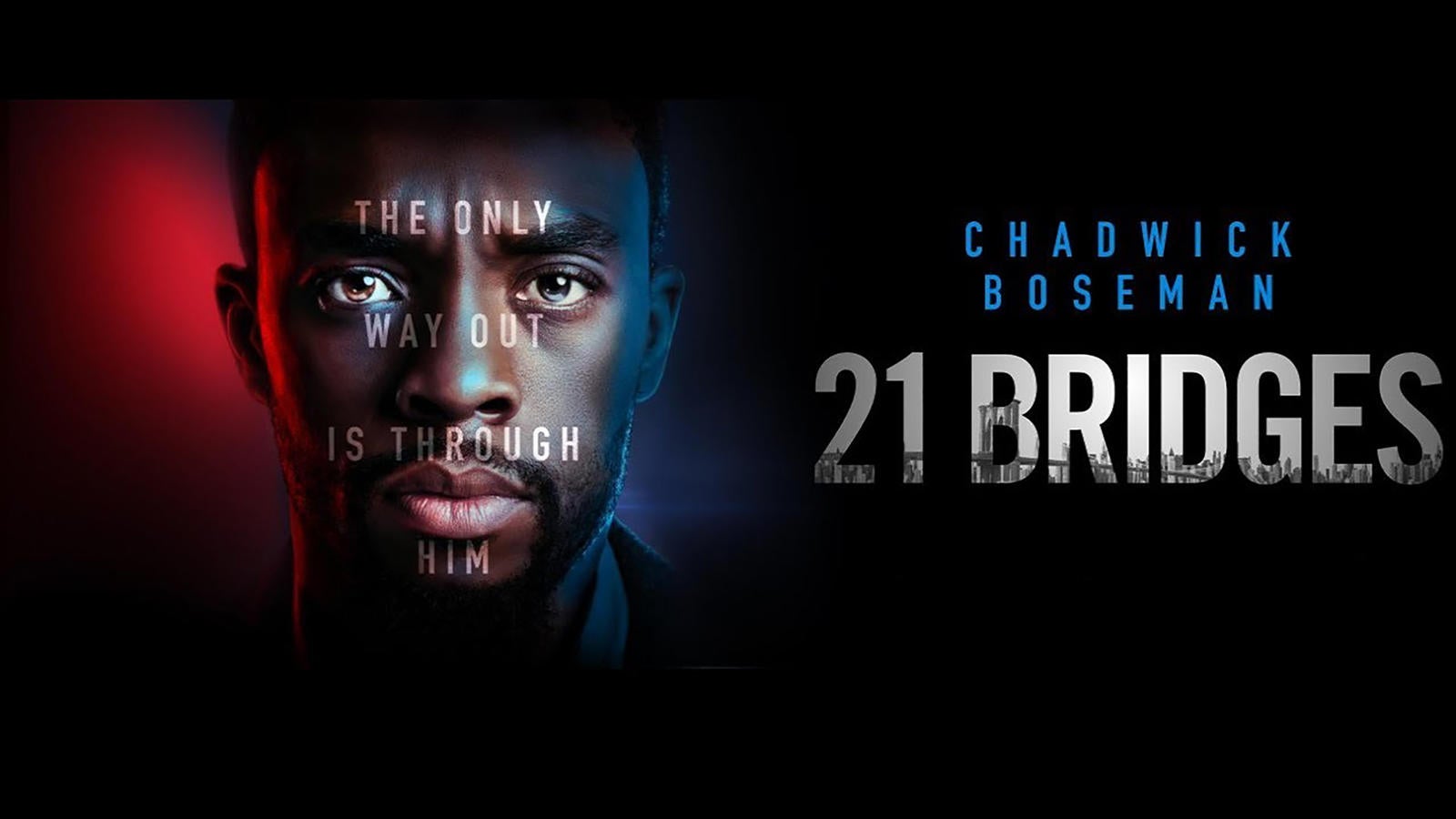