Shot on VENICE 2: Behind the Scenes of American Gigolo

From the surprise of the ‘Red Wedding’ to HBO’s first dragon battle, cinematographer Rob McLachlan ASC, CSC (Westworld, Ray Donovan, Lovecraft Country) is best known for some of the most iconic moments in Game of Thrones history. But McLachlan's latest work, American Gigolo, is a present-day reimagining of an 80s classic which gave him a chance to experiment with lighting and a more stylized look.

In addition to being a remake of a classic, the show has another distinction – it was one of the first shows in the world to shoot with the new Sony VENICE 2. We met McLachlan to discuss the show and his experience with VENICE 2.

Switching Cameras to the Sony VENICE 2

American Gigolo is a noir drama that follows Julian Kaye (Jon Bernthal) 15 years after his wrongful conviction and release from prison. The eight-episode series follows Kaye as he navigates life amidst the backdrop of a mystery of the people who betrayed him.

As a veteran cinematographer, McLachlan was brought in after the pilot was shot to keep the production running on time. McLachlan's first move was to change the camera and lenses– but the choice wasn't just an aesthetic one but also a practical one.

"I knew that shooting anamorphic, as they did on the pilot, would look great but would cost us time. I'd worked with the Sony VENICE before and knew that the built-in NDs and the added sensitivity of the camera would buy us more time to do other things, like getting more coverage and improve the lighting." 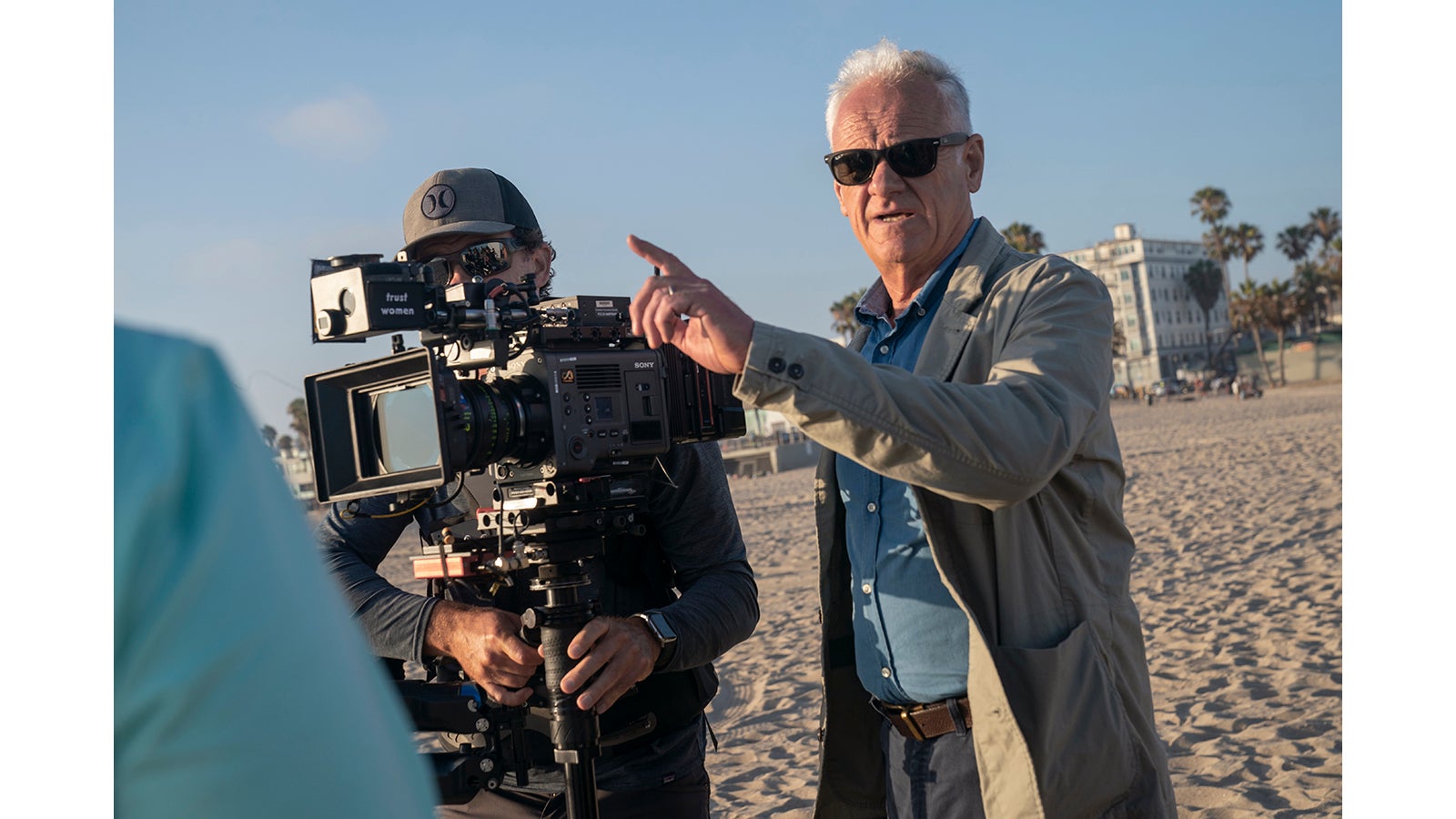 The Look of the Show

To maintain the anamorphic look, McLachlan shot with the full 8K sensor and used ZEISS Supreme Primes and Supreme Prime Radiance lenses, and extracted anamorphic from the combination. Aside from making these practical changes, McLachlan worked with his DIT Tim Nagasawa to push blue into the shadows with a custom matte box from Otto Nemenz, which they dubbed the Otto-con. And while the pilot focused on capturing as many sequences as possible with oners, McLachlan concentrated on getting more coverage, especially close-ups to show the characters connecting.

"If you watch the pilot again, you'll see some critical scenes that were shot in oners. It's all played in profiles. You don't see the characters connecting, and you're losing a lot of the emotion and the great acting by looking at everything in a profile. Oners are great for a feature or something where you're not under a time constraint, but for a TV show, you need to have those bits of coverage to build the drama editorially and enhance the performances."

Aside from these practical changes, McLachlan worked with Nagasawa to develop the look for the present day and flashbacks. In fact, Nagasawa also created the show's concept look.

"For the "Present Day" American Gigolo "look" we took a very neo-noir approach, borrowing some visual cues from the original. Using color contrast with warm and cool hues mixed with the VENICE 2 palette and ZEISS Supreme lenses, it all came together beautifully," said Tim Nagasawa, who also DPed episode four of the series and was the second unit DP for multiple episodes. "Some of my favorite setups and the most memorable were shot on the 65 and 50mm."

For those flashbacks, the crew used a combination of different filtration, from Hollywood Blackmagics, Tiffen Glimmerglass and Blue Streak filters combined with the Radiance Primes. Immediately, they found that the VENICE 2 could handle heavy filtration without it looking obvious.

"You can really see the effect in episode three when the girl wakes up after the party and wanders out at dawn into the swimming pool just as the sun's coming up. That shot really took our breath away and really demonstrated the capabilities of the VENICE 2 because in that single scene the brightness changed, but the contrast range remained incredible.” 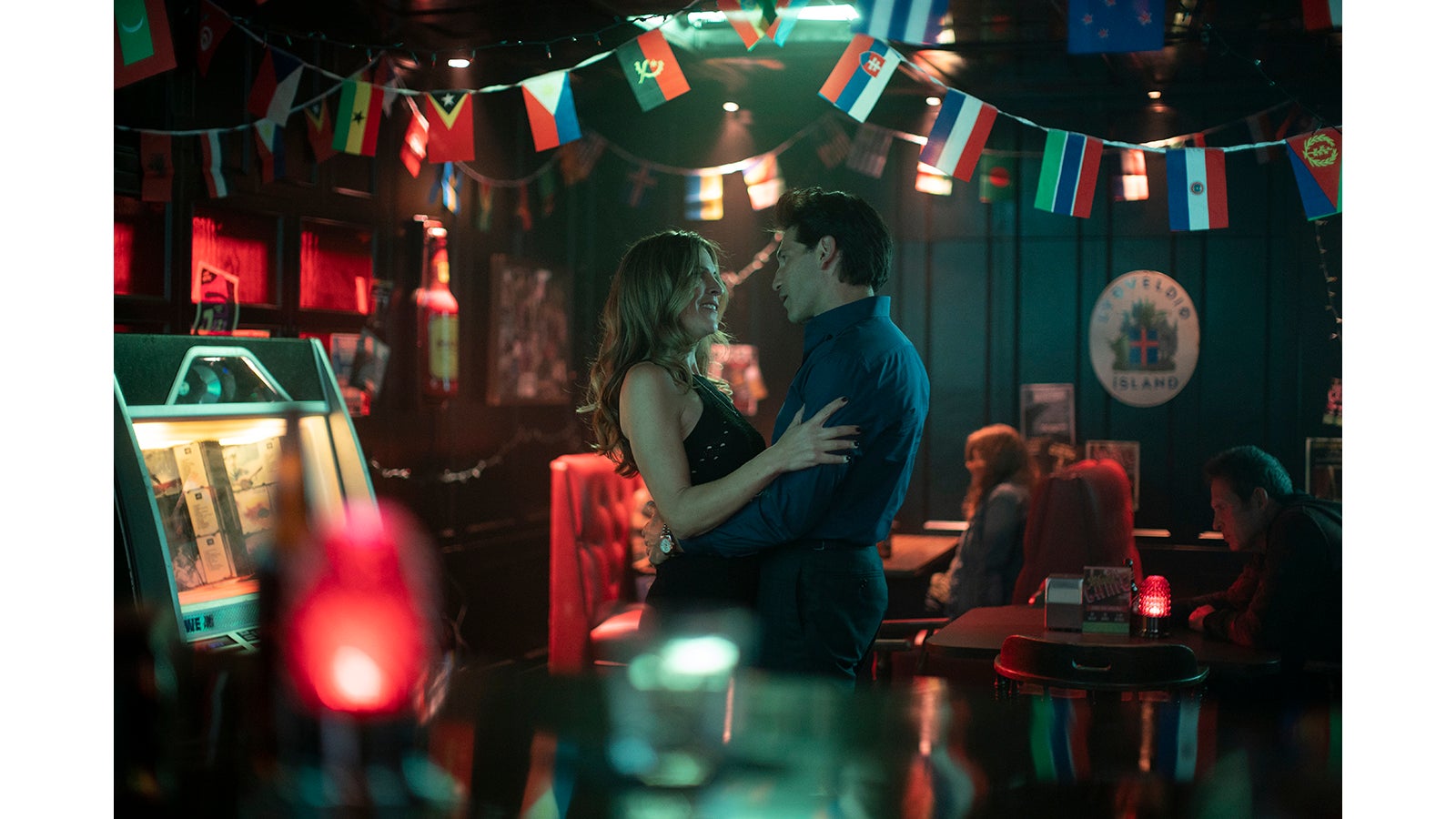 Nagasawa DPed episode 4 of the series

Picture Shop's Shane Harris (Westworld, Reminiscence, You, Prodigal Son) managed the final color timing for American Gigolo. He's worked on nearly a dozen shows filmed with the Sony VENICE and really came to know the VENICE color science after working on Self Made with cinematographer Kira Kelly.

"That was a really cool project to work on because Kira Kelly did a bunch of tests upfront. She shot all these different exposures and rated them differently. Those tests helped me learn where the sweet spot is to get the best out of the camera," explains Harris.

For the look of the show, Harris also made sure there were no strong highlights in the shots to create a softer, more cinematic image. He adds, "I took the original LUT, and did some desaturation to it. We placed that blue color in the black and mid-tone areas. We made sure that we didn't get any of the blues in the highlights so we could make sure we could still get proper skin tones. The other thing that we added to give it more authenticity was to add LiveGrain. There were different levels of grain depending on whether it was the present-day or a flashback."

Impressions of the VENICE 2

Both McLachlan and Nagasawa were impressed with the image quality from the VENICE 2, from the smooth skintones to the dynamic range.  McLachlan pointed to a series of outdoor-indoor shots that demonstrate the camera's dynamic range. These shots would generally be very challenging for a camera but the VENICE 2 handled it easily.

"It was breathtaking how well it handled interior-exterior contrast ranges and how little light I needed. That shot is typically a tough shot to do. And once upon a time, if the director wanted to do that, you'd have to tell them that it's going to take a long time or it's not going to look very good. And with this camera, you don't have to do that anymore," says McLachlan.

As a noir series, it makes sense that American Gigolo would include low-lit scenes. But what you won’t see are scenes so dark that you’re forced to turn off all of your lights and shutter your windows, as you squint to discern what’s on your TV screen. And while Sony cameras are known for their low light sensitivity, the VENICE 2 has set an all-new standard.

"We found that the camera would see detail that couldn't be seen with the naked eye. It was quite impressive. There were times when we were able to take advantage of available light or existing practicals instead of using our set lighting, but for the most part, we still used traditional lighting practices but at much lower levels," said Nagasawa. 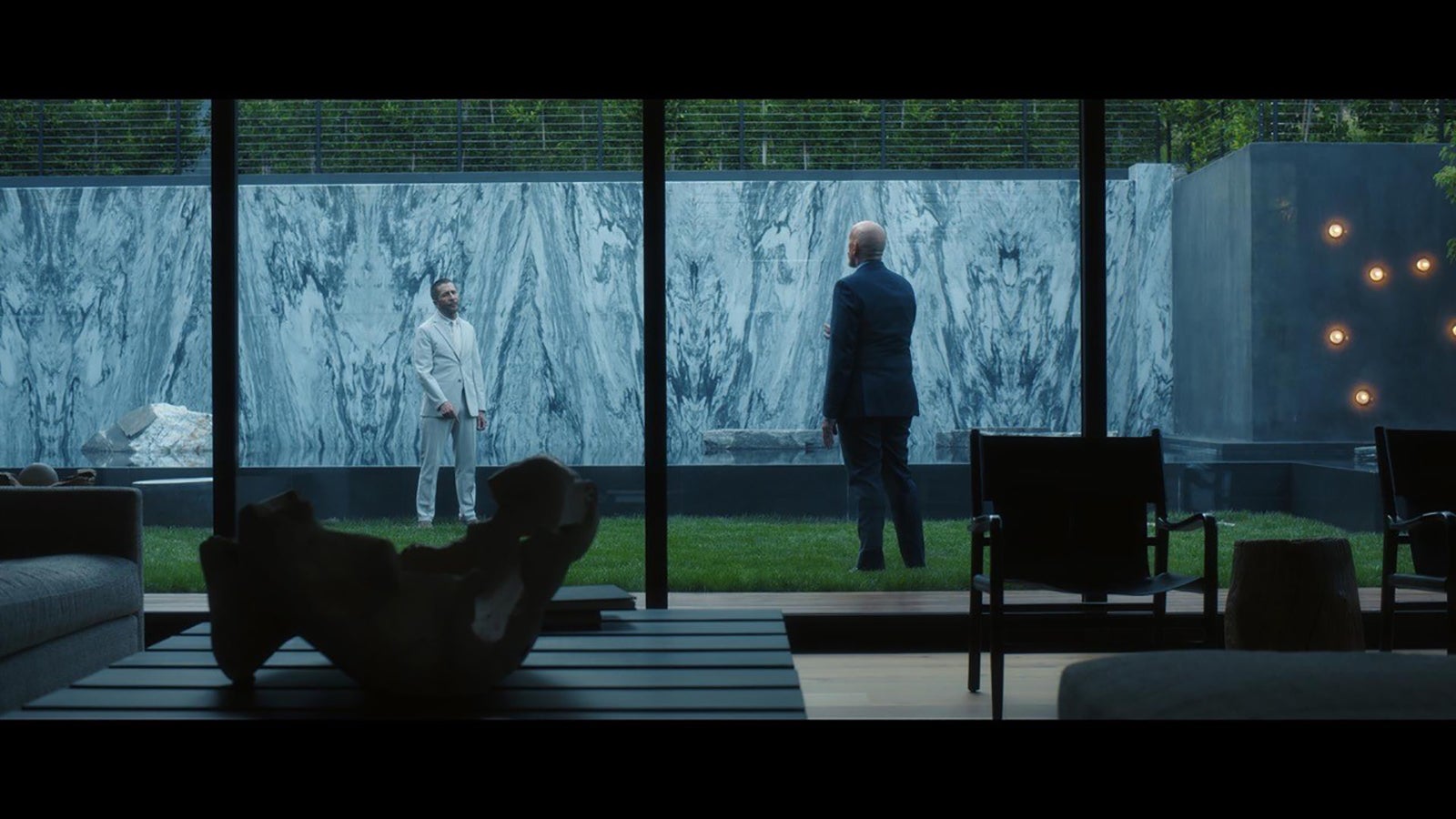 As McLachlan and Nagasawa had worked with the VENICE 2 ahead of its launch, they were familiar with the workflow. For Daniel Rodriguez, the show's Post-Production Producer, the first challenge was working with a camera that was not released to the market yet. But, Rodriguez managed to streamline the show's post-production process with the following: ensuring that the post facility, Picture Shop Burbank, had run multiple tests on transcoding and rendering using the latest versions of the Sony Venice 2 SDK (software developer kit) and DaVinci Resolve, and doing a full workflow delivery process (offloading media, transcoding, online, color and delivery).

ThunderBlade SSD drives were a necessity for shooting 8K and dealing with a new camera.  Rodriguez explains, "When we first started the show, they wanted to use G-RAID drives, but I knew it wouldn't work. Those drives don't spin fast enough and would mean that offloading footage would take a lot of time.  At the time, production insisted, but after the first day of shooting, we updated our camera shuttle drives to ThunderBlades.”

“Technology is always changing and there are always new software and hardware advances to incorporate into workflows. I knew ThunderBlades were the best shuttle drives for any camera, including the Sony Venice 2. Switching to the ThunderBlade drives made all the difference. We went from three to four hours per camera of footage offloading to thirty to forty-five minutes per camera." 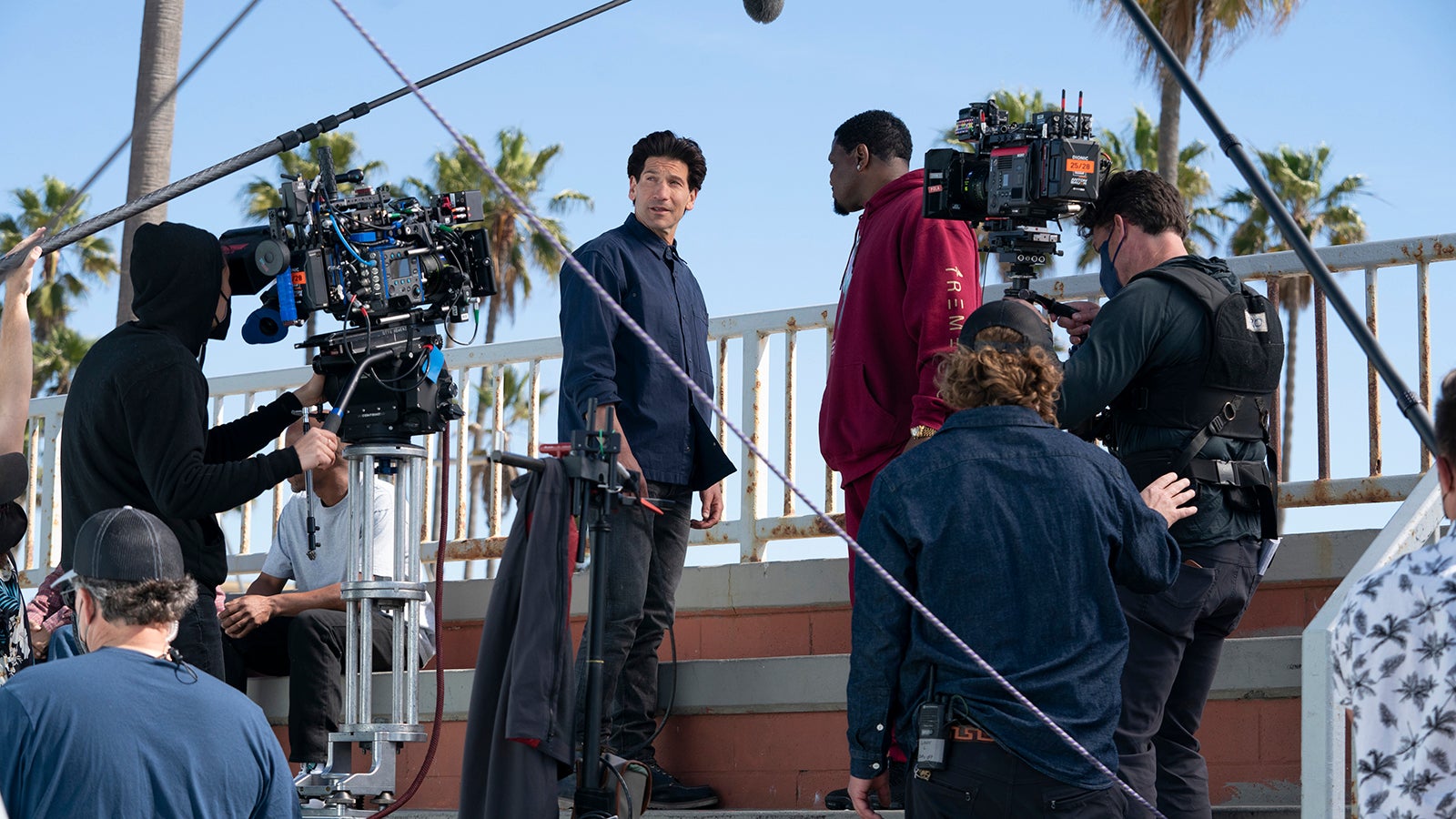