Set following the events of September 11th, "The Hot Zone: Anthrax" is a thriller that follows a team of experts tracking down the murderer responsible for mailing anthrax-laced letters. The anthology series, starring Tony Goldwyn and Daniel Dae Kim, was shot in Toronto, Canada, by cinematographer Thom Best.

Best is an acclaimed cinematographer best known for Showtime's groundbreaking series "Queer as Folk." He's also won awards for the Emmy-winning movie "Run the Wild Fields," Lifetime’s Emmy nominated and GLADD award-winning “Prayers for Bobby” and the cult horror film "Ginger Snaps," for which he received a Genie nomination.

Best's career spans genres from horror to comedy, westerns to science fiction, working in feature films, television series, and TV movies. We sat down with the filmmaker and discussed his love of film and how he solved the challenge of filming in extreme low light conditions with the VENICE's sophisticated color science. 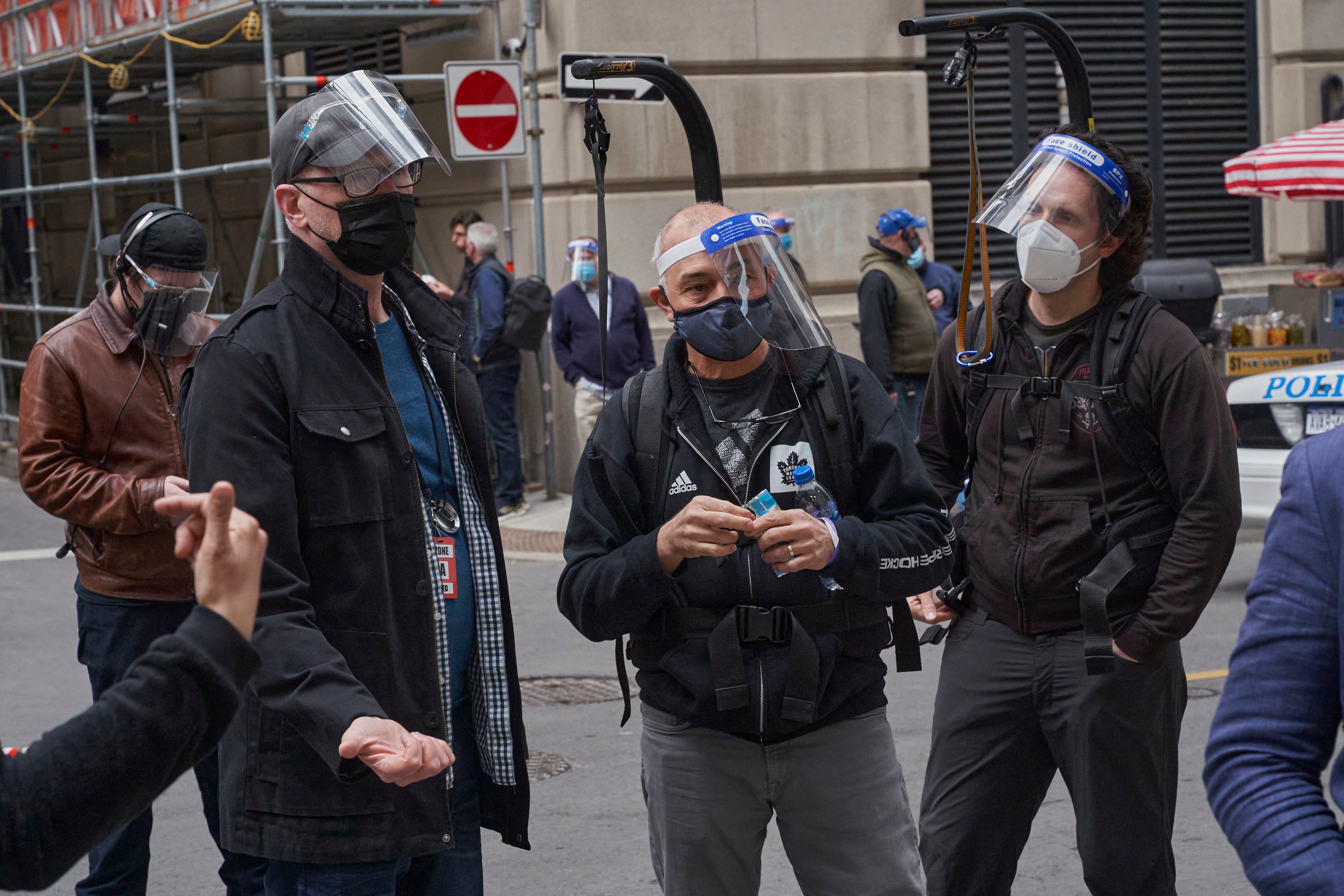 Tanya Lyon: With your transition from film to digital, do you ever find yourself gravitating back to film?

Thom Best: The last film project I did was "Prayers for Bobby," with Sigourney Weaver. It’s set in the early eighties, and we wanted that typical Super 16 look. I have a deep love for film, but honestly, I don't miss it at all. You can be as creative as you want to be using digital.

TL: Let's talk about "The Hot Zone: Anthrax." You shot on the original Sony VENICE. Where did you get the inspiration for the look?

TB: The initial look for the first episode was set by director Dan Percival and Steve Lawes, the DP on the pilot episode. Both Dan and Steve took films like "Zero Dark Thirty" and "Zodiac" as cinematic references. After that, I developed the look further with director John Fawcett - still very cinematic, but with far more camera moves. Dan has very controlled frames and he's very detailed oriented in terms of how he approaches a frame. Whereas John loves to move the camera. So that's a challenge in terms of lighting, when you're moving the camera and trying to maintain a style that's been set. 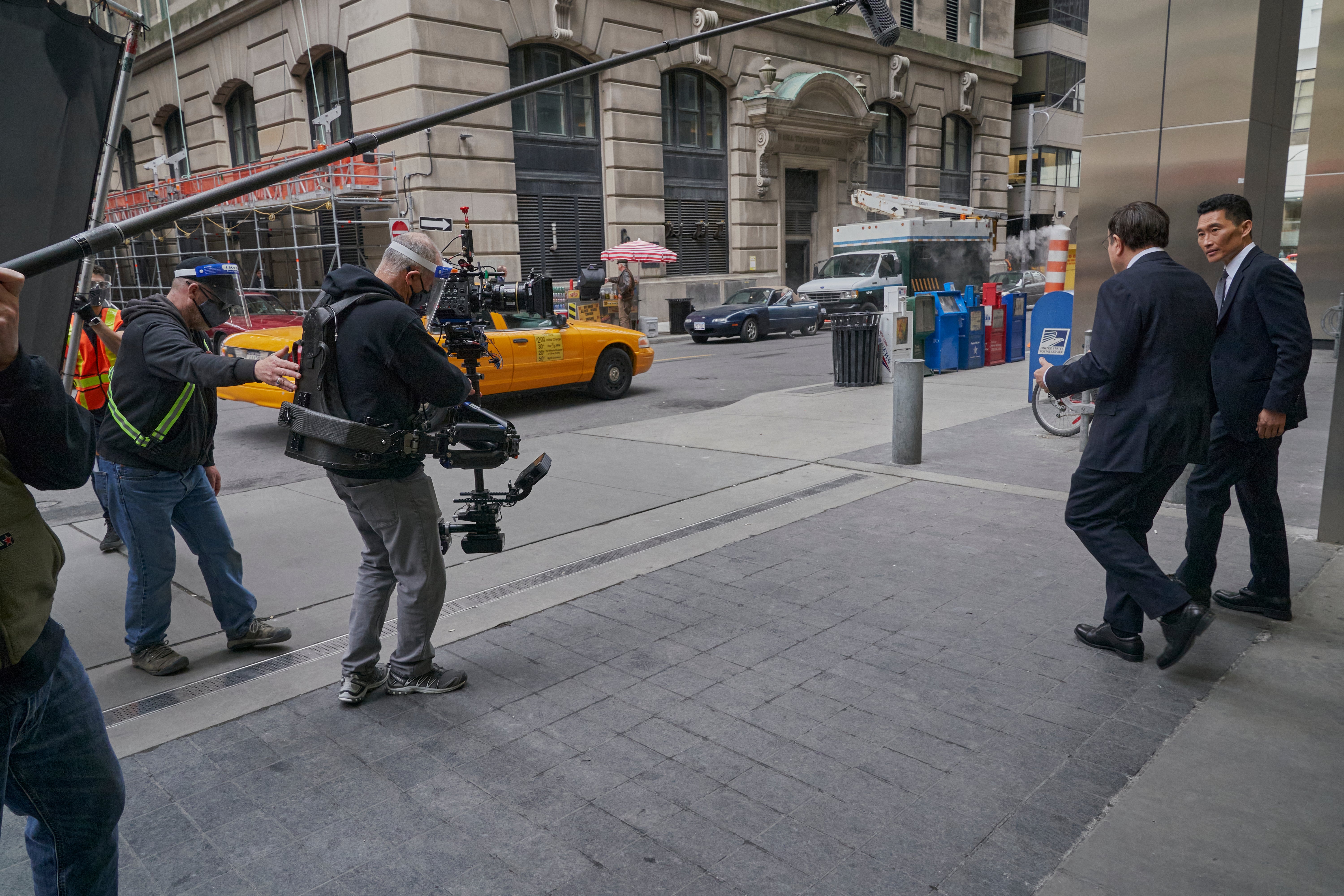 TL:  About the framing, what were your go-to focal lengths, and why did you choose them?

TB: [Director] John [Fawcett] loves to use wider lenses. We lived most of the time in the 32- or 40-mm range. And it just works. You can go handheld and still go right into an actor's face for the emotion of the moment, and it still has a lovely quality. It has a lovely fall off and just gets really into the actor's face. My preference is to either be on a really long lens, like 100 plus, or on nice wide lenses. I'm always pushing for longer lenses. I love the more compressed feel of things.

TL: With regards to skin details and tones, what lenses and filtration did you use with the VENICE?

TB:  We were shooting with Cooke S5s and S4s and the ARRI Alura zooms. But I really stayed off the zooms. I'm not a big filtration fan in general. I like it as clean as possible. If there's a lot of women involved, we'll add some soft effects, just a light touch. I’m not a fan of putting anything in front of the lens. I'd rather use my time to get what I, what we need and trust and know what I've got with the camera. 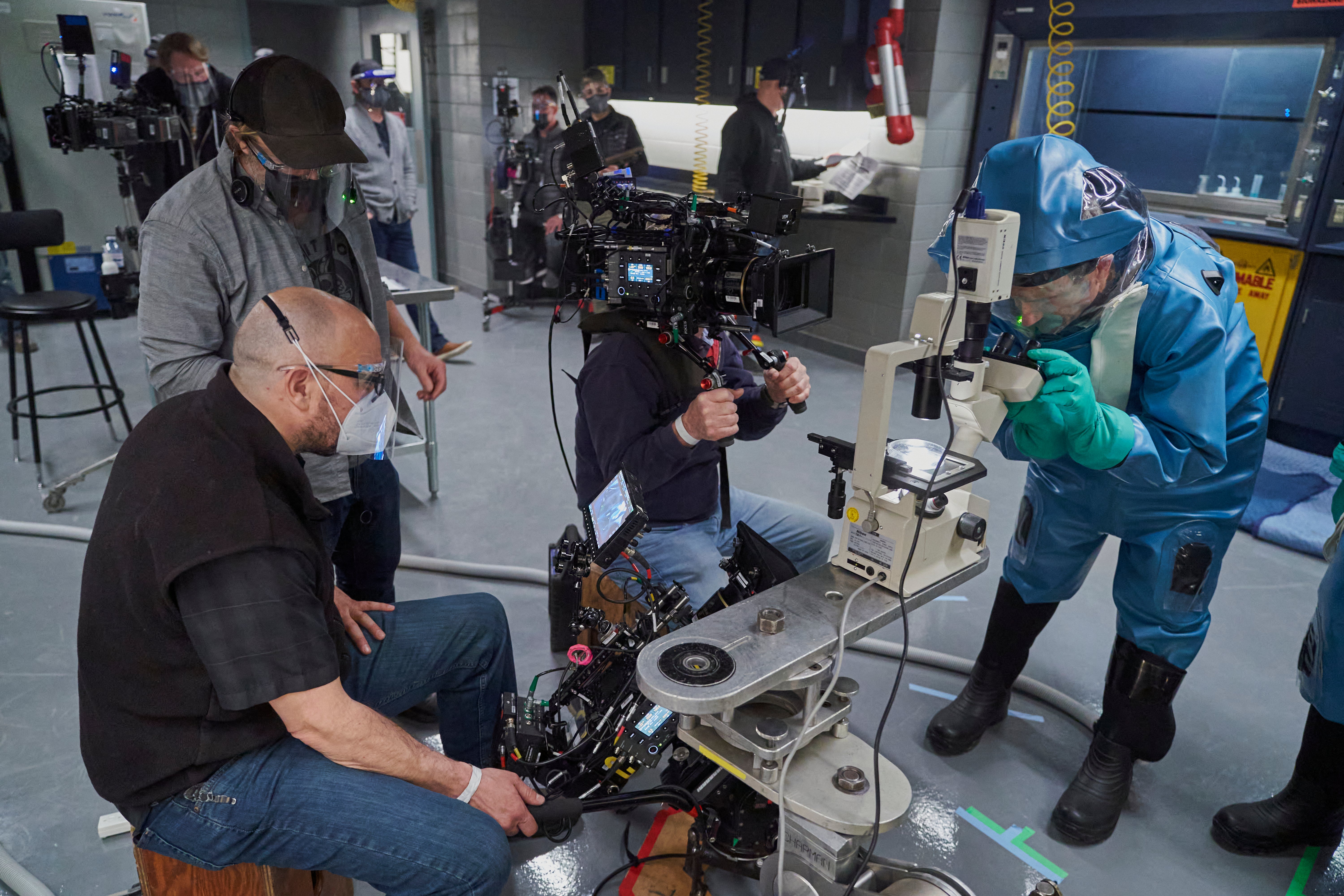 TL: Did you shoot on location or on set?

TB: - There was a lot on location, but also a very large and impressive studio built.

TL: What was it like working with the cast?

TB: The cast was lovely. Everybody was very focused on their character. In a situation like that, you give the actors a lot of space and make the set as comfortable as possible for them to do their work. As typical, some actors didn't want to hit marks. But you want to give them some flexibility. You try to find out where the actor wants to go, and then you make sure you go where they go. And that's one thing I love about the VENICE; it just allowed me to really light with a lot of practicals and still maintain the cinematic look while they move around. 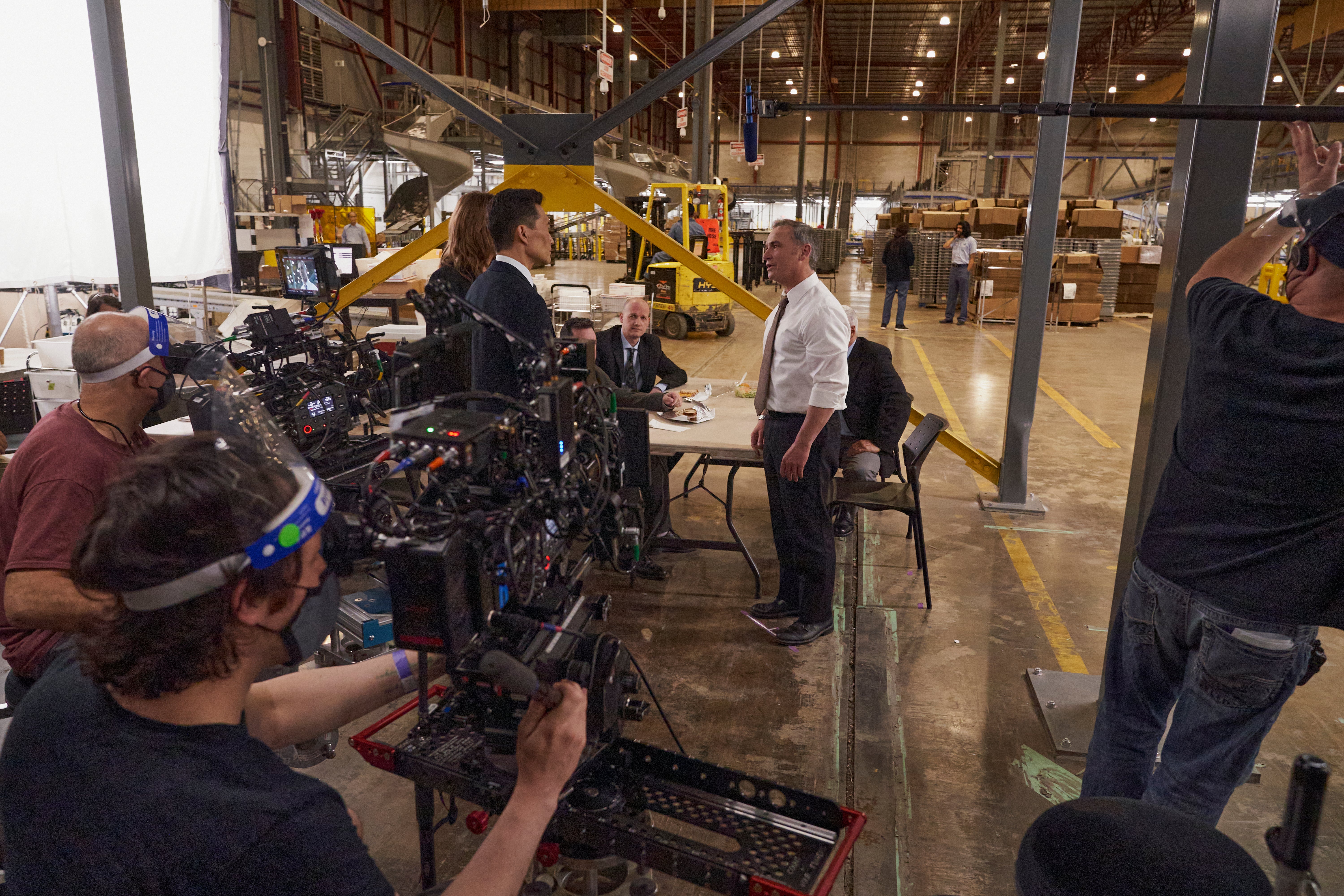 TL: How did you end up shooting with the VENICE?

TB: The initial request for the VENICE came from Steve. He had a great experience with the camera shooting a feature in Italy just prior to the ANTHRAX job. And so he really wanted to use it. And I was a little apprehensive because I've been using the Alexa for the last five years. So I agreed to run some controlled tests with it. It was when we were viewing the footage that we couldn't tell what had been shot at 500 and what was shot at 2500. It was unbelievable. We were confused with what we were shooting.

For me, the dual ISO ability of the camera is a game-changer. The camera sees into the blacks. Let me first say, for me, the basis of all good images is a good clean, solid black. And the great challenge for every cinematographer is doing high contrast lighting, but not crushing the blacks, and being able to see into the blacks and the shadows. And that's what the VENICE does. It's beautiful. Its latitude, roll-off, and highlights are beautiful.

TL: I heard that you had a pretty incredible real-world example of how great the dynamic range is on the camera. Can you share the story?

TB: There was one scene which we shot in a real airplane. We shot the series during the pandemic so none of us had been in an airplane for a year. We were parked on the tarmac and couldn't bring any green screens or anything close to the aircraft. So all the lighting and everything, all the big lights, had to be far away from the aircraft. I was relying on being able to blow out the windows. On the monitor, it looked fine, but when we got into the color grade, there suddenly were all those details. You could see vehicles running back and forth on the road in the distance. It was like, "Oh boy!" So the latitude of the camera is continually shocking! So, the VENICE has become my new favorite. 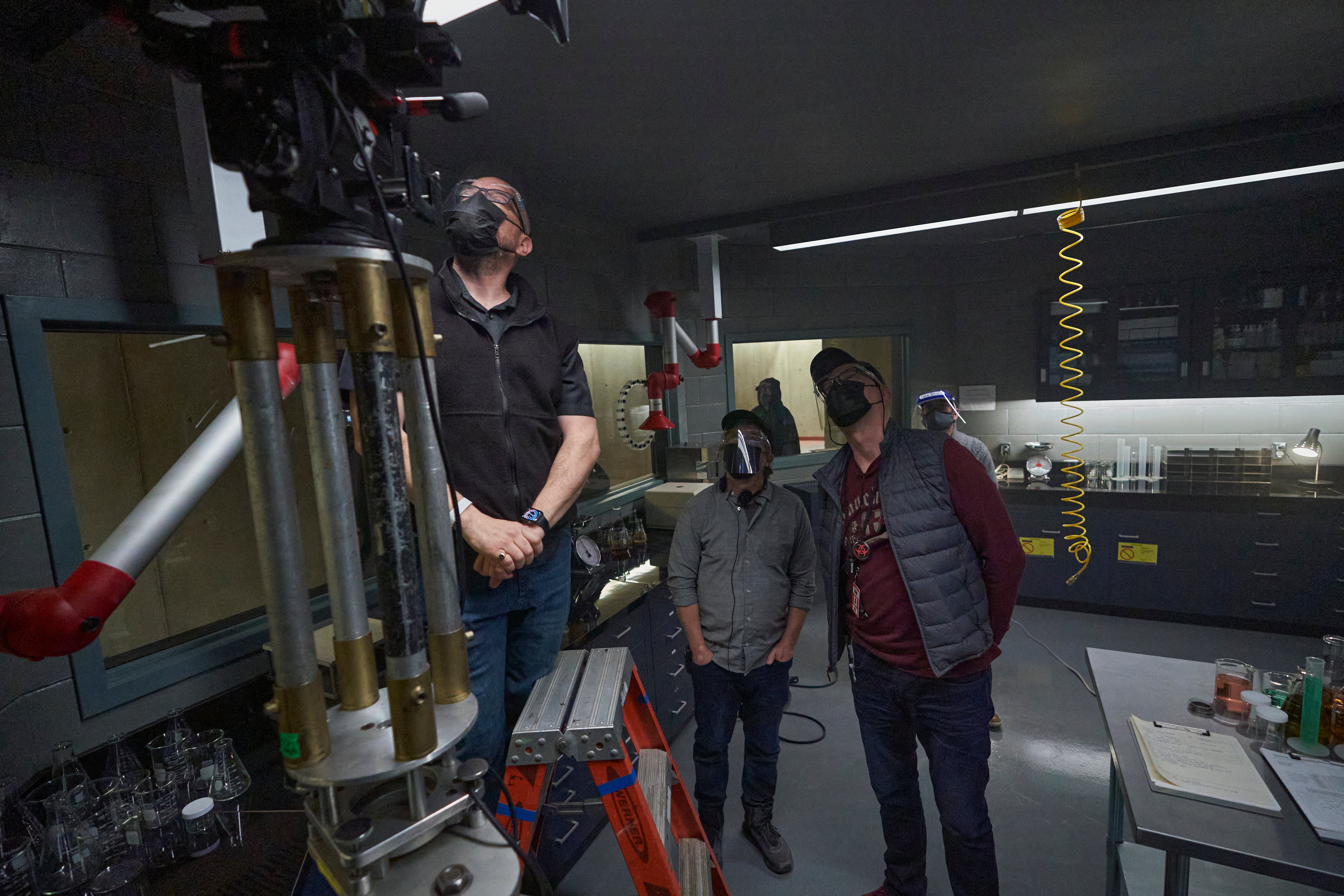 TL: How did you feel about how the camera renders color? Did you feel there was good color separation?

TB: Oh, completely. And the one thing that I really love about it, is when you get towards underexposure, it doesn't default to any red, which is unbelievable. Skin tones are very truthful - I think a very honest reproduction. Everything came up lovely and clean.

TL: And then in terms of ISO, what did you shoot at?

TB: Exteriors, we shot at 500, and then we would end deep from there. Both day and night interiors, I began to shoot at 2500 and then work from there. Again, the latitude and dynamic range showed off. You just began to see things that you never would before. And in the big set are backdrops, which were like a hundred feet long, and were lit with flows behind banks of fluorescence behind, it was a backlit. I couldn't knock it down far enough because we were seeing too much. Being able to shoot at 2,500 meant that I could shoot with the practicals in the sets. 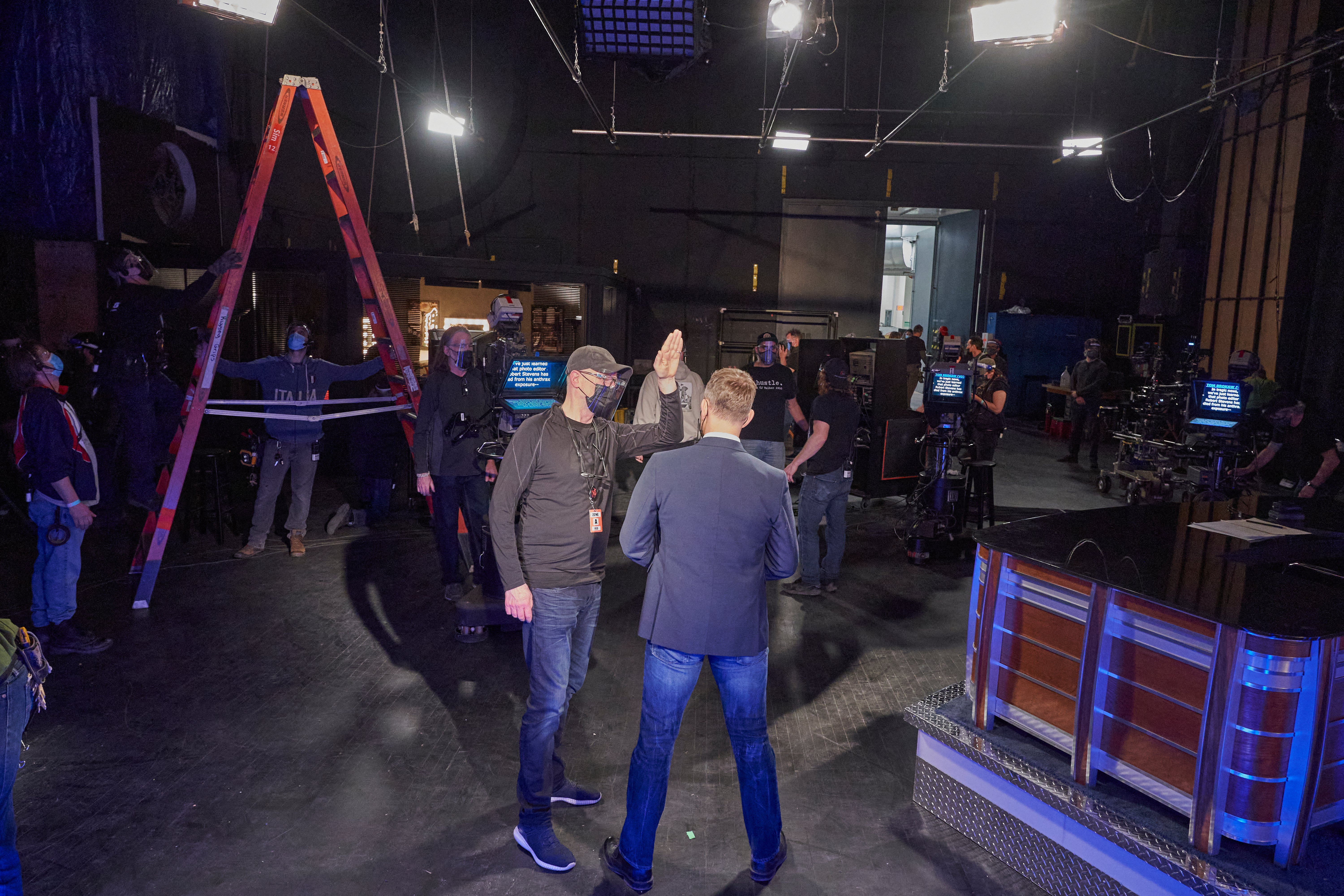 TL: Roger Deakins once said, a lot of people mistake good cinematography for pretty cinematography. What do you think about that statement?

TB:  Well, Roger Deakins is absolutely correct. Cinematography isn't just about beautiful images. It's about telling a story with the appropriate images, and sometimes they can be quite ugly and just disconcerting. Roger’s one of my inspirations. This film wanted a certain amount of grit to it. It wasn't always about pretty images, but it was definitely about creating contrast with the light and the shadow. That was part of the story. And I love dramatic images. I'm drawn to the dark. I love maintaining a sense of mystery.

TL: Any closing words you want to share with us?

TB: Only one thing, I love the VENICE. I took it onto the next show and it was another really great test for the camera and the show. And yeah, maybe I'll talk to you about it down the road;)