SHOT ON VENICE: John Lindley, ASC, Captures "The Woman in the House Across the Street From the Girl in the Window”

In this new offering from Netflix, the dark comedy/mystery stars Kristen Bell, who plays Anna, a divorced mom mourning the death of her daughter. She spends her days staring out the window, while sipping on a (very tall) glass of wine, until she witnesses a gruesome murder…or did she? “The title is meant to be a play on a genre of fiction,” explained cinematographer John Lindley, ASC (“Your Honor,” “Divorce,” “Snowfall”) who worked with director Michael Lehmann (“68 Whiskey,” “Snowfall,” “Veronica Mars,” “Jessica Jones”) on this 8-episode series. Explained Bell on the Today Show, “It's based on all of these psychological novels that were written for women, by women. The formula's always the same. She drinks too much. She might be mixing it with pills.”

When asked about the overall tone, given the quirkiness of the show, and the mix of comedy, horror and drama, Lindley said, “What was great is that when I got the script, Michael included a look book he created when he first started the project. The look book was not a bright, over-lit comedy. It was comedic, and suspenseful, but the look was also dramatic.”

His camera choice was always going to be Sony VENICE, since he had been shooting with the camera since it debuted in 2018. The rental package from Keslow also included Cooke S4is lenses. Together with his colorist, Pankaj Bajpai, Picture Shop, Lindley created the LUTs for the show during prep. “We work together a lot and I give him reference material, which can be some stills or some of my previous work. I set the camera up with all the LUTs and spend a few hours or half a day shooting a test, with the cameras and lenses. Then I have the LUTs on set, and I try to stick with those through the whole post process.” 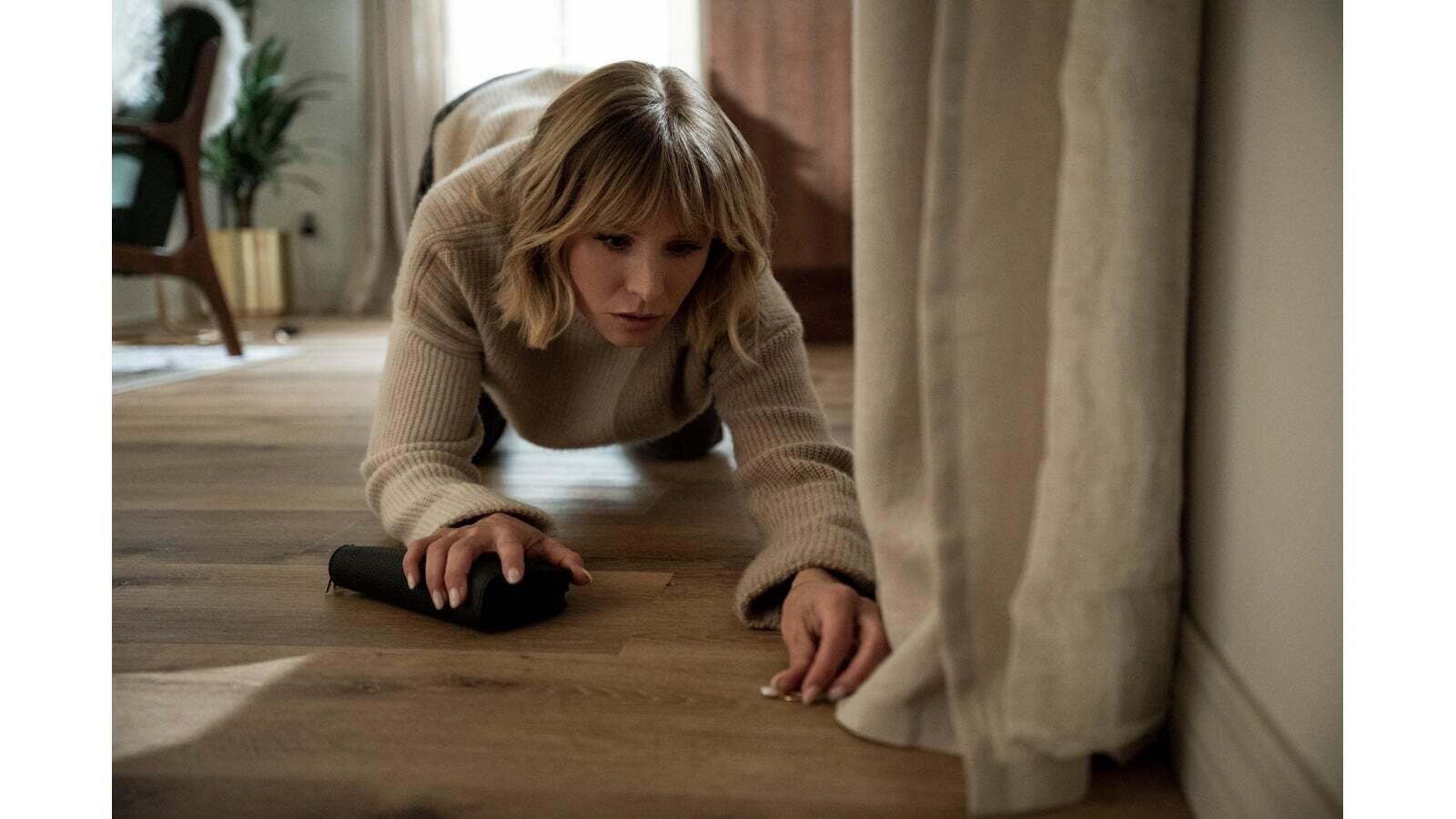 Kristen Bell as Anna in episode 103 of The Woman in the House Across the Street from the Girl in the Window. Cr. Colleen E. Hayes/Netflix © 2021

With the main set being Anna’s house, the exterior is a location while the rest is a set. “We matched the set to what you could see when you open the front door, but once you go in, everything else is on stage,” said Lindley. Paint colors in the house were important, and the team spent a lot of time deciding on them for the interior. “The house had to be sunny and happy, yet dark and depressing and frightening at other times. So the paint colors had to lend themselves to playing in both arenas.” Within the house is an attic, which lent itself to the heightened drama/horror aspect. “It was a different set, twelve feet off the floor, with different challenges. It’s a very low ceiling, so we put the ceiling in sections and on hinges, which allowed me to raise them out of my way when I needed to. I thought the attic really added to the suspense elements.”

Because the main character is afraid of the rain, Lindley was tasked with making rainy days in sunny California. “I leaned on the day scenes when it wasn’t raining, and made it look bright and clean, so that when we had cloudier days written in, you could tell the weather contrast. We tended to shoot late in the day bordering on dusk, or very early in the morning,” he said. “In fact, there was only one day that was actually cloudy, otherwise we were trying to make it look cloudy.” 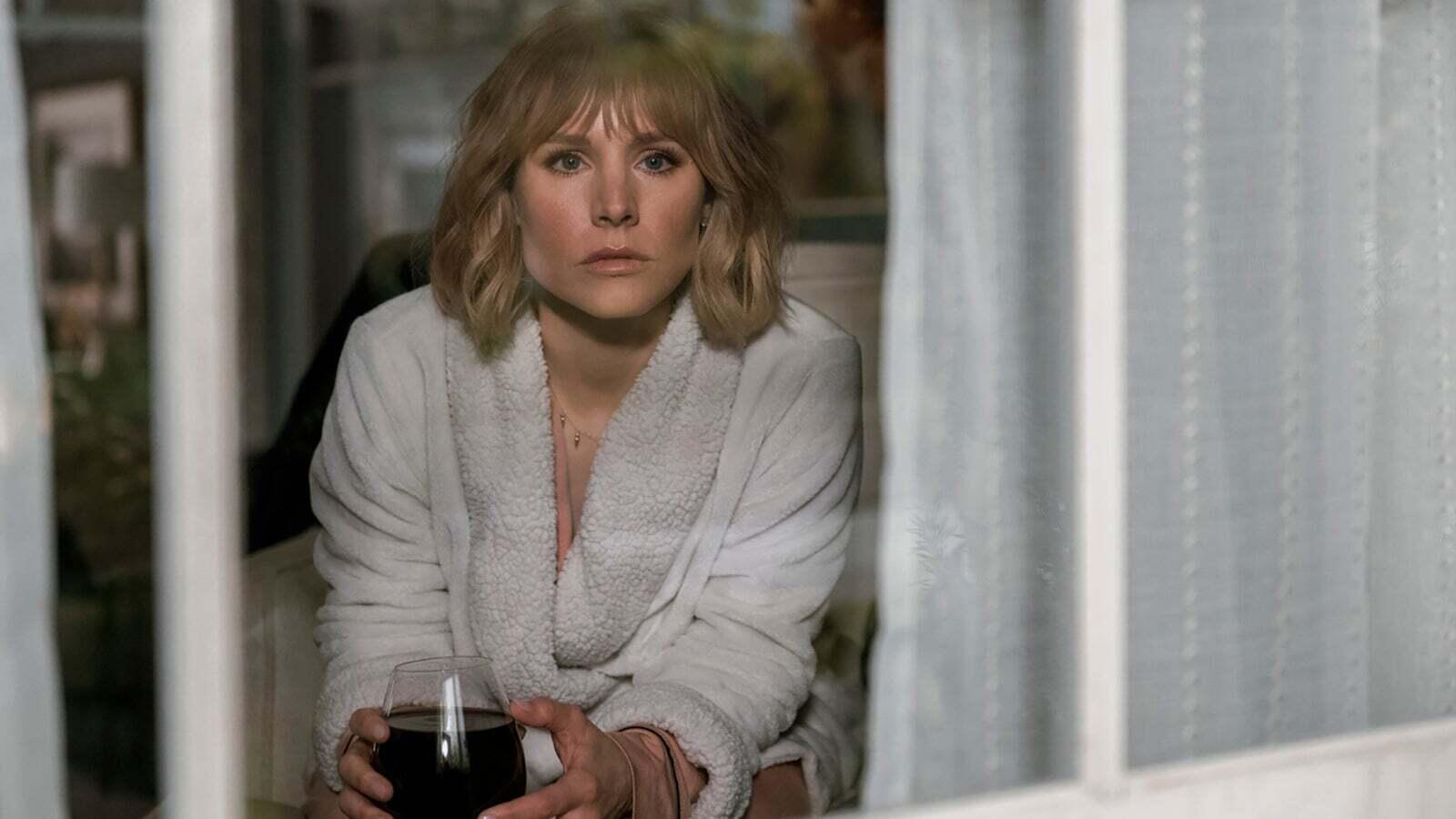 Kristen Bell as Anna in episode 101 of The Woman in the House Across the Street from the Girl in the Window. Cr. Colleen E. Hayes/Netflix © 2021

Anna’s bedroom, where she stares out the window (and consequently sees the murder), was set quite high off the floor. “The site lines helped with the window, without seeing the stage floor. I had hard lights and soft lights so I could play with the light. There are times when it’s raining, and daylight and night scenes. I had lights on I-beams, so I could easily move them into the required positions.”

Lindley is a big fan of LED lights, “from all different kinds of manufacturers. It’s so easy to change color and intensity with LEDs. I have a board operator with me all the time, which makes it easy since the lights are completely adjustable and you can record everything you did. It’s very helpful when you need to recreate split scenes.”

As Anna begins to delve into the murder she saw, the story moves to a strip club, where the plot began between two other characters. Lindley scouted half a dozen strip clubs, and to date, “I have now scouted 100 strip clubs,” he laughed. “They are on a broad spectrum: some are very simple with one room and a pole, and then there are fancy clubs. Since the lighting at this one was far simpler and we only shot one day, I installed the lighting that was used in the scene. The scene involved a fair amount of choreography, and I added a lot of bold colors, as well as ground fog, so it looked cheesy -- in a good way. The actor spent a lot of time on that routine and did a great job.” 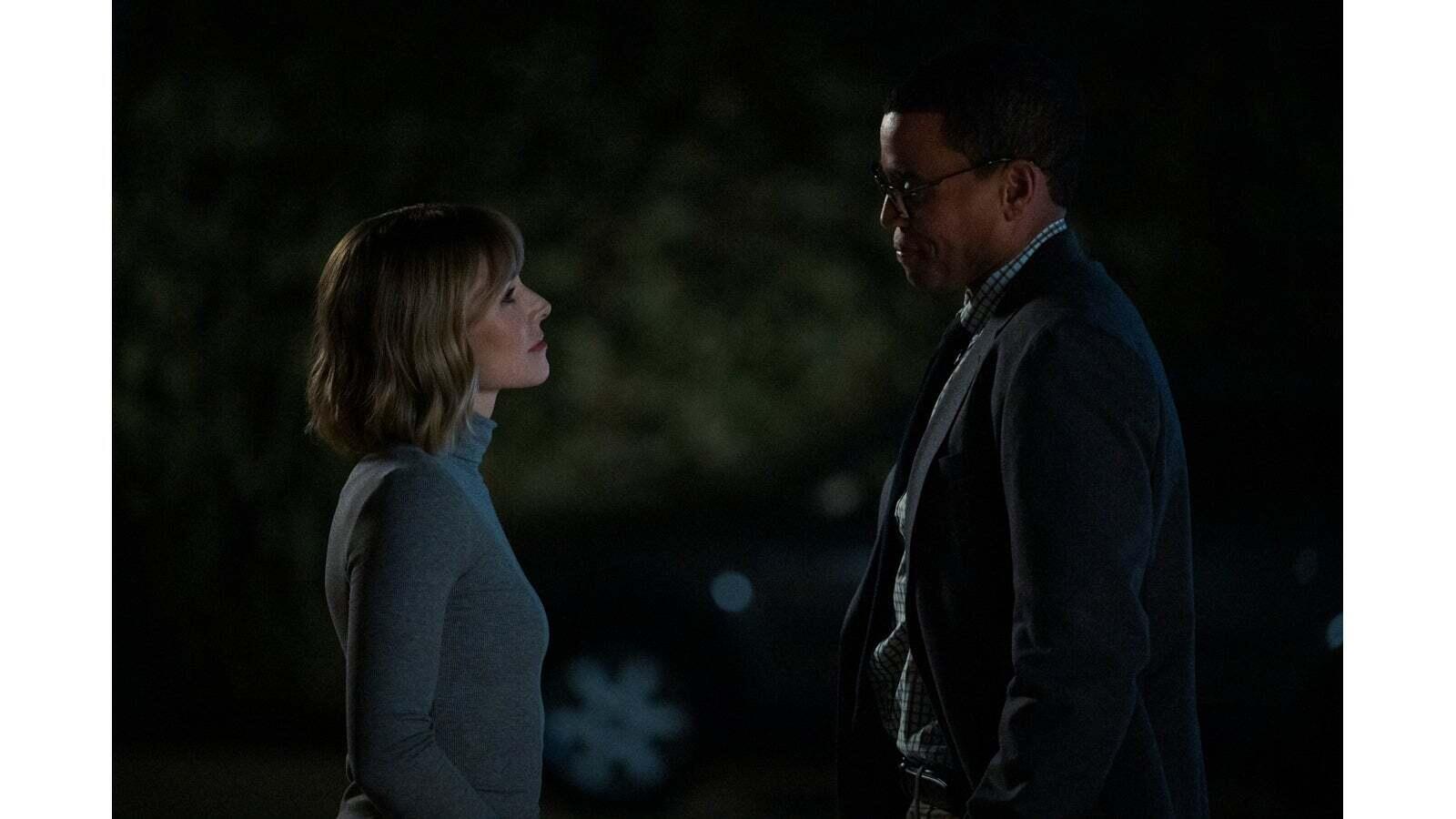 With Anna’s mind wavering between reality and psychosomatic trauma, after she is arrested as a suspect in the murder she witnessed, she dreams her ex-husband frees her and takes her to an outdoor wedding. “That was a real, non-functioning prison in LA,” explained Lindley. “It’s pitch black, and her ex-husband wakes her up with the beam of a flashlight. As they turn a corner, the end of the hallway goes completely white. One of the things about contemporary cameras is that they hold the contrast really well; they don’t lose anything. I put some big lights back there, but even then I could still see some details in the white, which I removed in post.”

For Lindley, “I really find that Sony VENICE renders skin tones perfectly. I don’t expect a camera to render skin tones agnostically, since the image that comes out of the camera is based on the light I am putting on someone’s face. Is it warm or is it cold? Do I want it to be a reflection, or is it hitting them partially? When Kristen is exposed to the sunlight, and I overexposed a couple stops, is her skin tone reflective? Maybe not.” 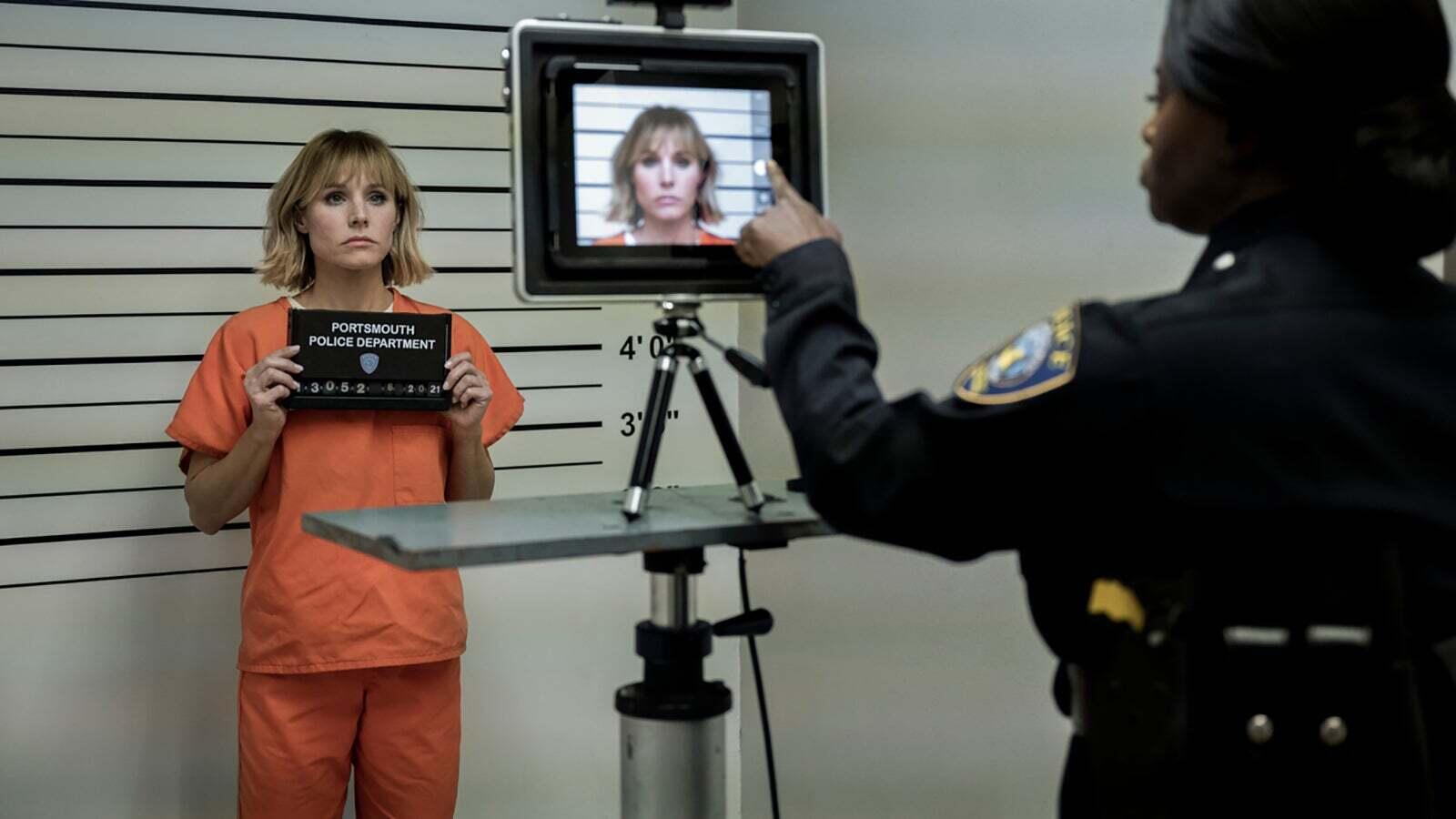 Kristen Bell as Anna in episode 107 of The Woman in the House Across the Street from the Girl in the Window. Cr. Colleen E. Hayes/Netflix © 2021

With the premise of the show mired in almost a sense of confusion to draw audiences in, and laced with deadpan humor, “I remember that Michael was never afraid of it being too dark, and that is often a fear some people have when things are meant to be funny,” he said. “With the Sony VENICE, I was able to utilize the dual base ISO to convey the look he wanted. I find it really handy, especially if I like the low light on a street at night; it’s great to be able to flip to 2500 and have practical lights play a signification role. The dual ISO is so fantastic I use it all the time.” Combined with the sensitivity, contrast range, and color rendition, for Lindley, choosing the VENICE for his project comes down to one thing. “I care about the pictures I can take with it.”

The Woman in the House Across the Street from the Girl in the Window is now streaming on Netflix. 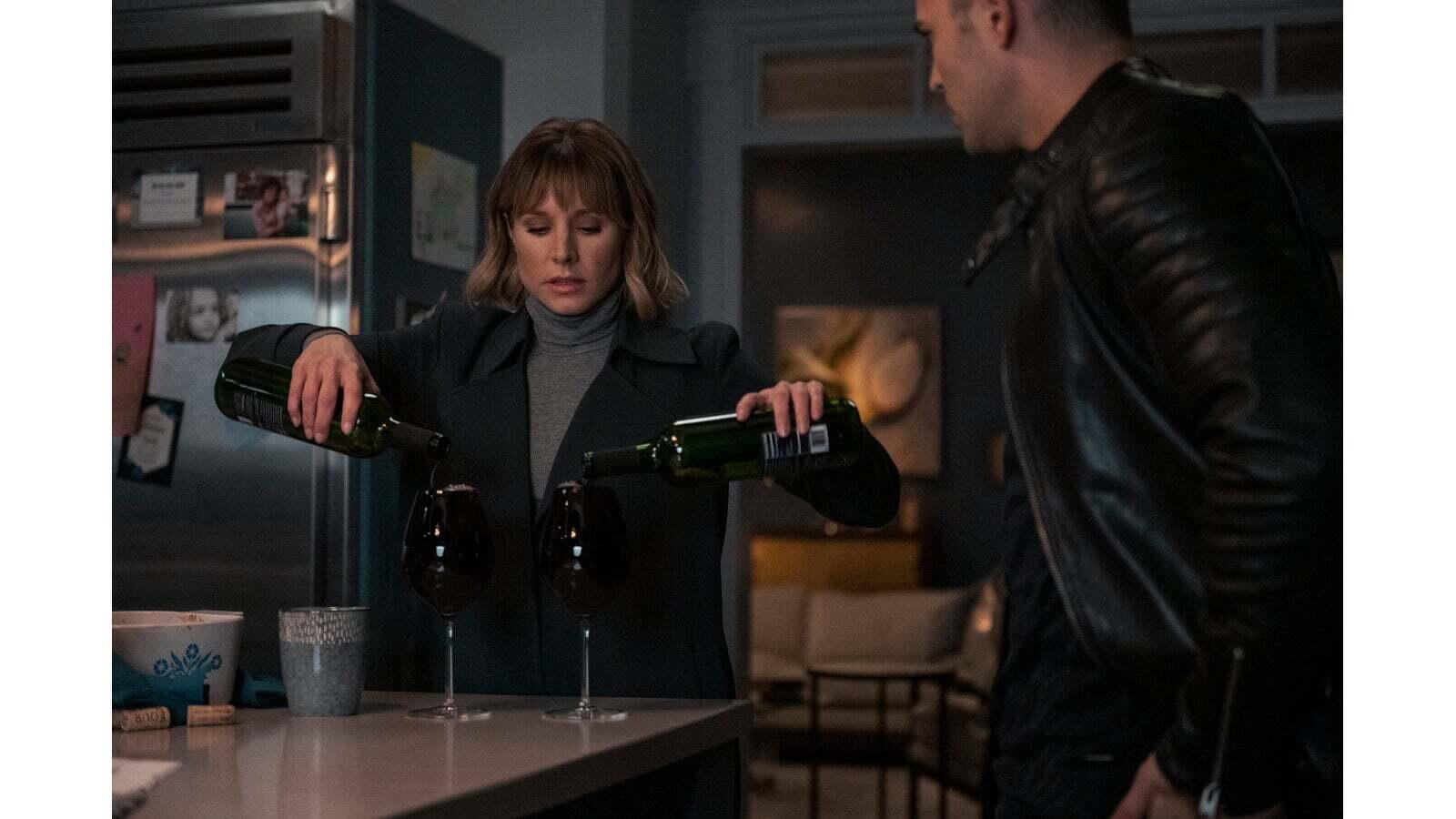