Successful cinematography has a dynamic quality that keeps the viewer engaged and inspired. The footage has to have depth to be compelling, and the technology found in the Sony Airpeak S1, along with its compatibility with a wide range of Sony’s camera bodies, enables filmmakers to create high-quality video content in ways that simply weren’t possible before. For a recent film project, creatives Michael Dyrland of DPdrones, Craig Coker and Eddie Hayes utilized the tech of the Airpeak S1 combined with the Sony FX3 to nail several film transitions at Four Aces Movie Ranch in the desert northeast of Los Angeles – and they are impressive to say the least. We caught up with the three of them to learn more about the project and how they used the new Airpeak to film it.

Craig Coker, an adventurer and photographer with over 10 years of experience in the drone industry, ran a single operation on the Airpeak for behind-the-scenes footage. “We came to the set with two drone teams,” explains Coker. “I flew Airpeak as a single operator and supported all the air-to-air BTS shots while the second team was in dual operation. Dual operation includes both a pilot and camera operator and facilitates precise framing, which is difficult to do in single-pilot operation. It’s important to me that a drone of this caliber can support both single and dual operation as I frequently do both. The second flight crew on this project was great. This being their first time using Airpeak, on set, showcased how easy the transition is to fly Airpeak from other platforms. They locked into it like they’ve been flying it for years.” 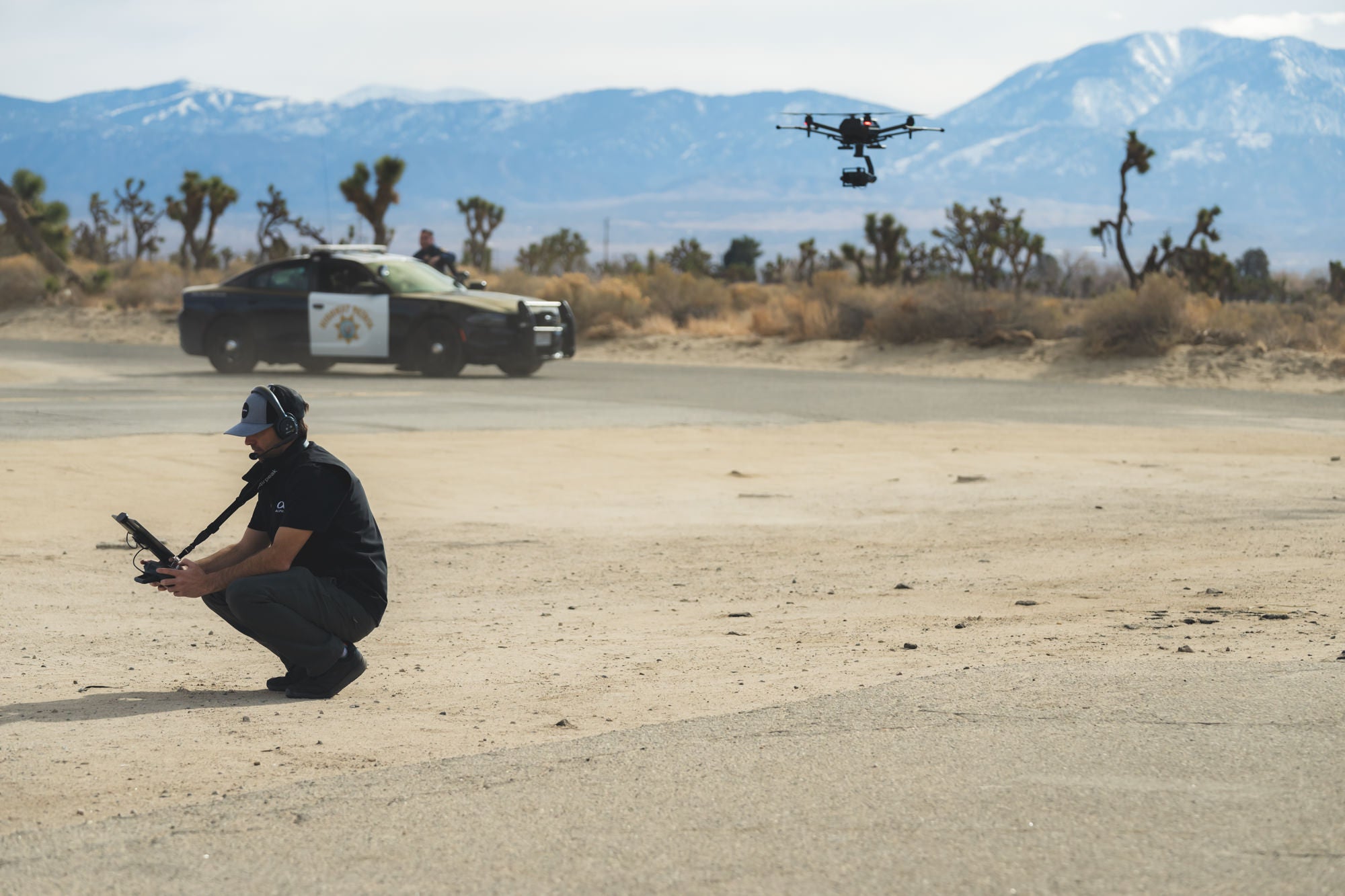 The second team running dual operation with the Airpeak S1 on set consisted of Eddie Hayes and DPdrones' Michael Dyrland. Dyrland started out as a conventional DP but decided to pursue aerial cinematography and now creates content for major brands. ”We had these older cars as props in the shoot," he says, "but we also were able to capture a lot of great moving car segments with the Airpeak. As a drone pilot, I actually film a lot of vehicles. What excited me about using Airpeak to film the car was being able to throw on Sony's awesome glass. With everything else on the market right now, you don’t have that much lens selection. So being able to use the Sony 85mm was really amazing. It gives a new perspective and we got some really beautiful shots, especially with these car chasing scenes.”

Hayes, a freelance filmmaker and photographer based in Seattle, Washington, has worked on a variety of projects incorporating drones to capture video and photos for clients. “Every shot was captured on the Sony Airpeak with the Sony FX3 utilizing the 24mm, 35mm, 50mm, and 85mm lenses,” explains Hayes. “We filmed for two days on a variety of scenes with actors, vehicle tracking, and B-Roll during the day and night. I was tasked as camera operator while utilizing the dual operation feature of the drone. This allows two pilots to work together on a single drone with their own individual controls. One pilot controls the drone itself, and the other operates the gimbal and camera. This allows for safer, more dynamic and controlled shooting.” 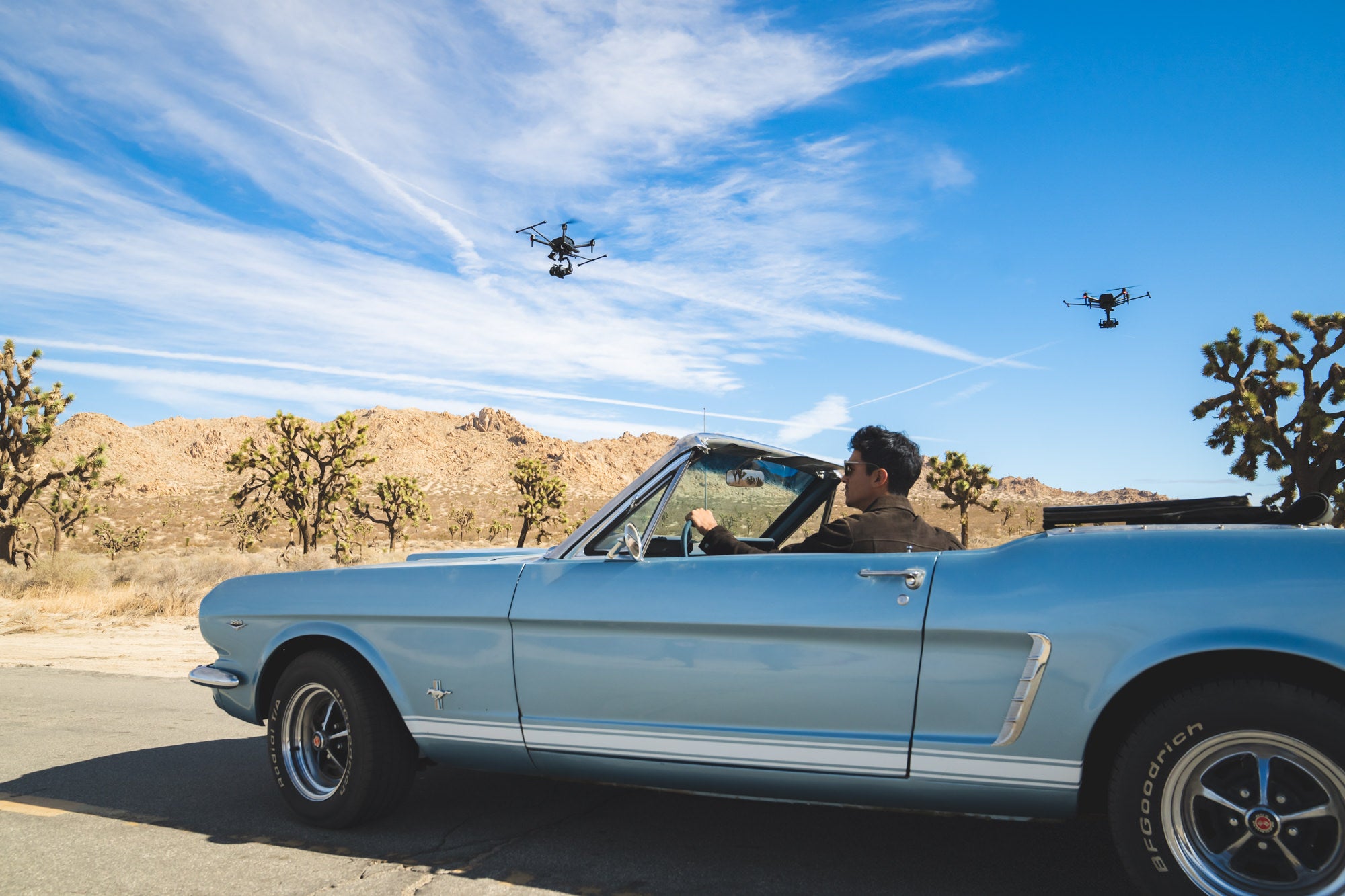 Hayes also noted how incredible it was to film close-up shots on a moving vehicle with the 85mm lens. “We were able to maintain focus, a shallow depth of field, and track our subject with dynamic movements. With the Airpeak in dual operation mode, we could track a vehicle and our actor much like a camera car would, but you have the ability to fly up to a high wide angle, all while maintaining focus.”

“Now that I think about it,” adds Hayes, “the Airpeak effectively took the place of a steadicam, crane, dolly and camera car. We had another gimbal on standby that was pre-balanced so we were able to swap cameras, lenses and batteries very quickly without powering off the drone.” 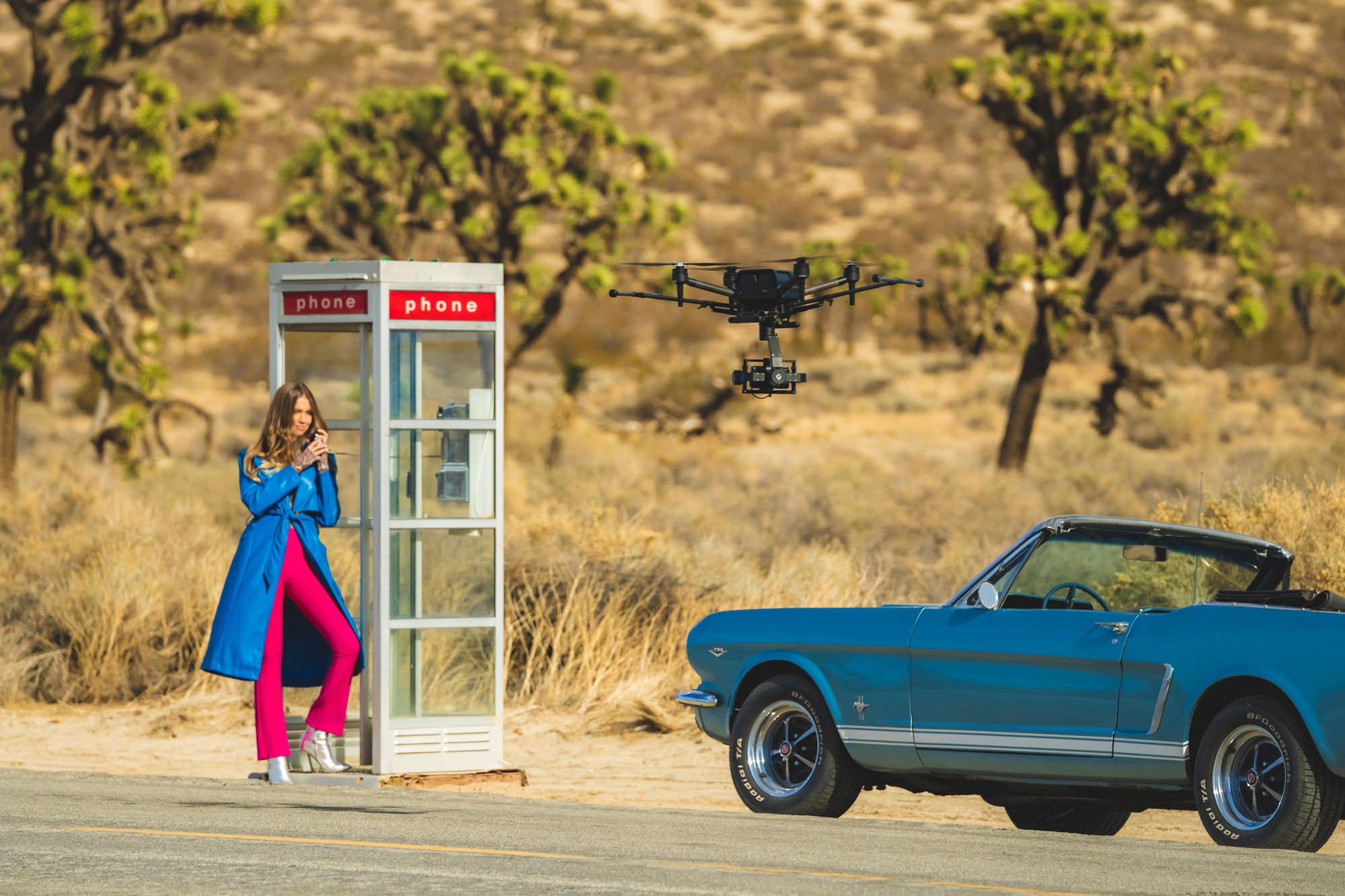 This was another way they were able to quickly transition between shots, and Dyrland says if you can have access to a couple of different gimbals during production, it’s a great way to efficiently switch. “We would have a 24mm lens on one gimbal and then we'd have an 85mm on another gimbal. We were basically able to hot swap those gimbals back and forth with very little downtime. It felt like a racing pit crew – we get the drone down, we swap the batteries out and we get the drone back up in the air as quickly as possible. Having a gimbal that you can swap out to another one that has another kind of camera and lens set up on it was pretty ideal and pretty quick for all the things that we were able to do that day, which definitely sped up production.” 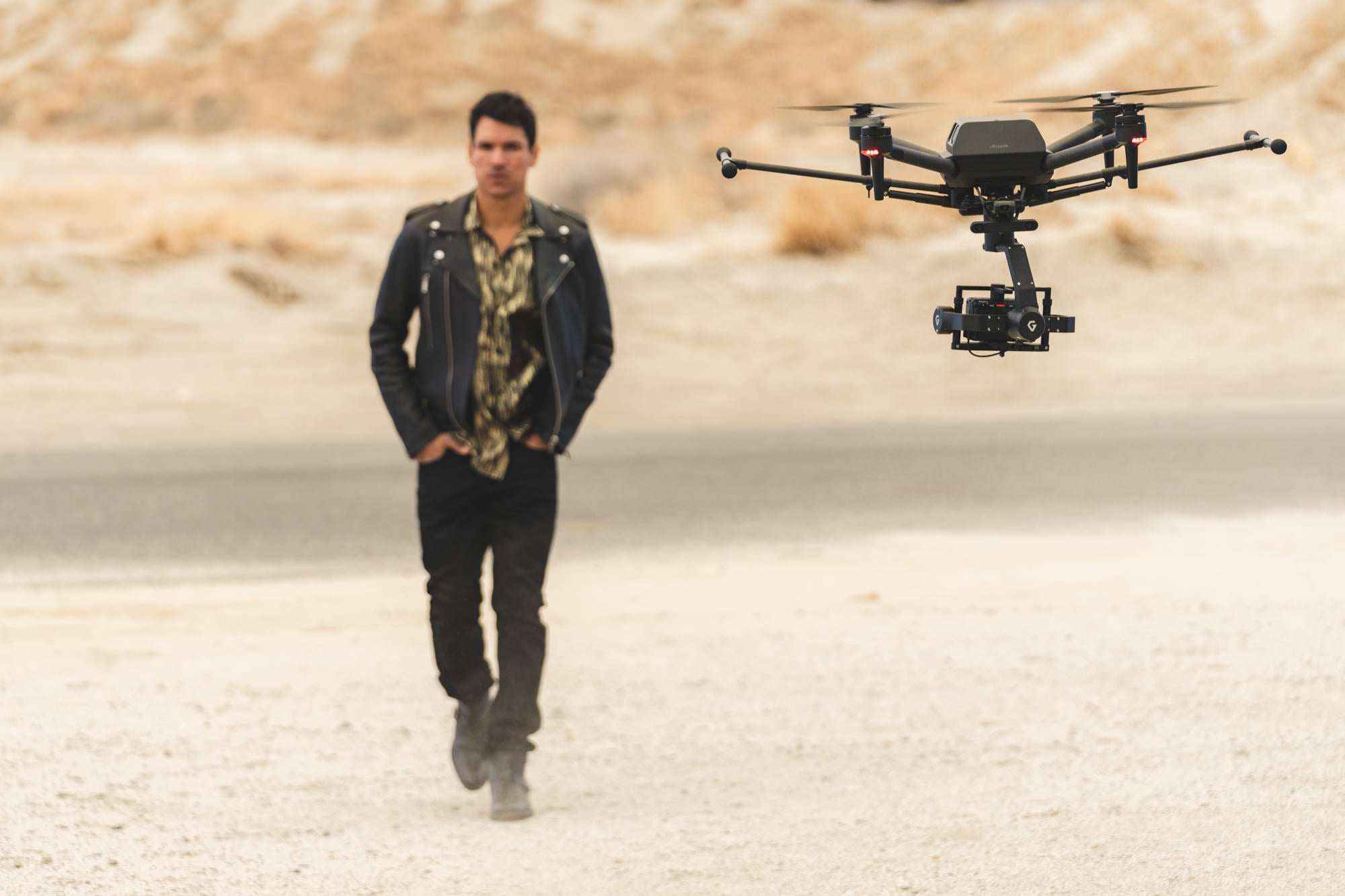 In another part of the film, the crew transitions the drone from flying in the air to a handheld gimbal that they can easily maneuver inside, and then back to a drone. “This shot was great,” says Dyrland. “We started with the drone in the air with a wide shot and we came down to ground level. Then behind-the-scenes, we had one guy catch the drone, and then we actually moved through a hotel room to go from air to ground, turning it into a gimbal on the ground. And then once we went through the hotel room, the talent came out to meet the car, and then we took off again.”

Dyrland continues, “The reason why I really got into aerial cinematography is not to just have a camera on a tripod locked off, but to start the camera at point A and be able to move it creatively to point B, and not just on a rail system, left to right or up and down – but to actually move it through an X, Y, and Z axis. We were able to get some really dynamic, interesting shots with the Airpeak, being able to use it as a drone, down to a jib and then back to a drone again. That was pretty darn seamless.” 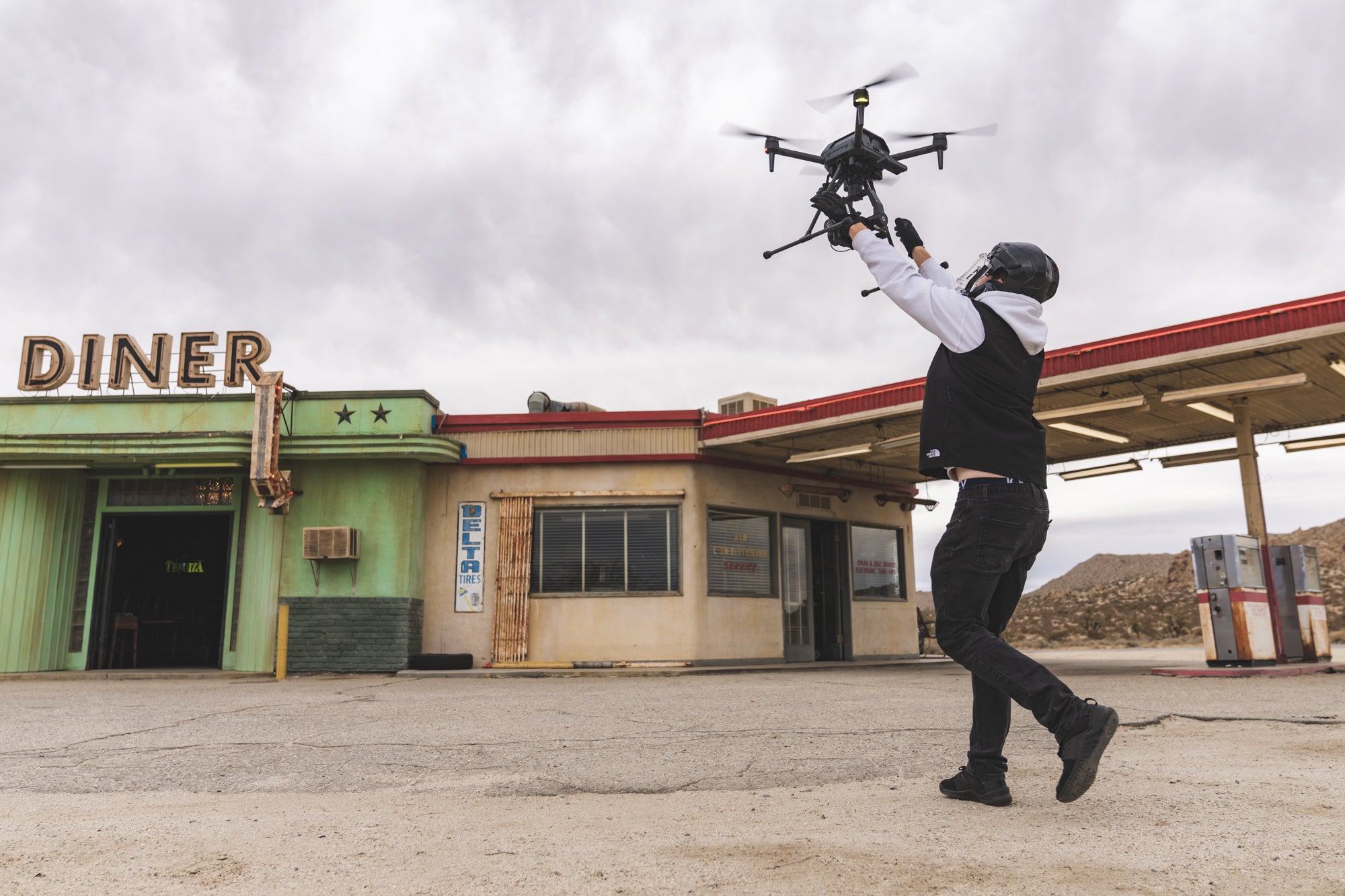 All three of the pilots saw the new creative possibilities opening up as they used the Airpeak. “What most impressed me about working with the Sony Airpeak,” explains Hayes, “is the ability to utilize Sony’s great autofocus and low light capability from the air. We can now have great cinematic depth of field and shoot 60 fps at night without sacrificing image quality.” 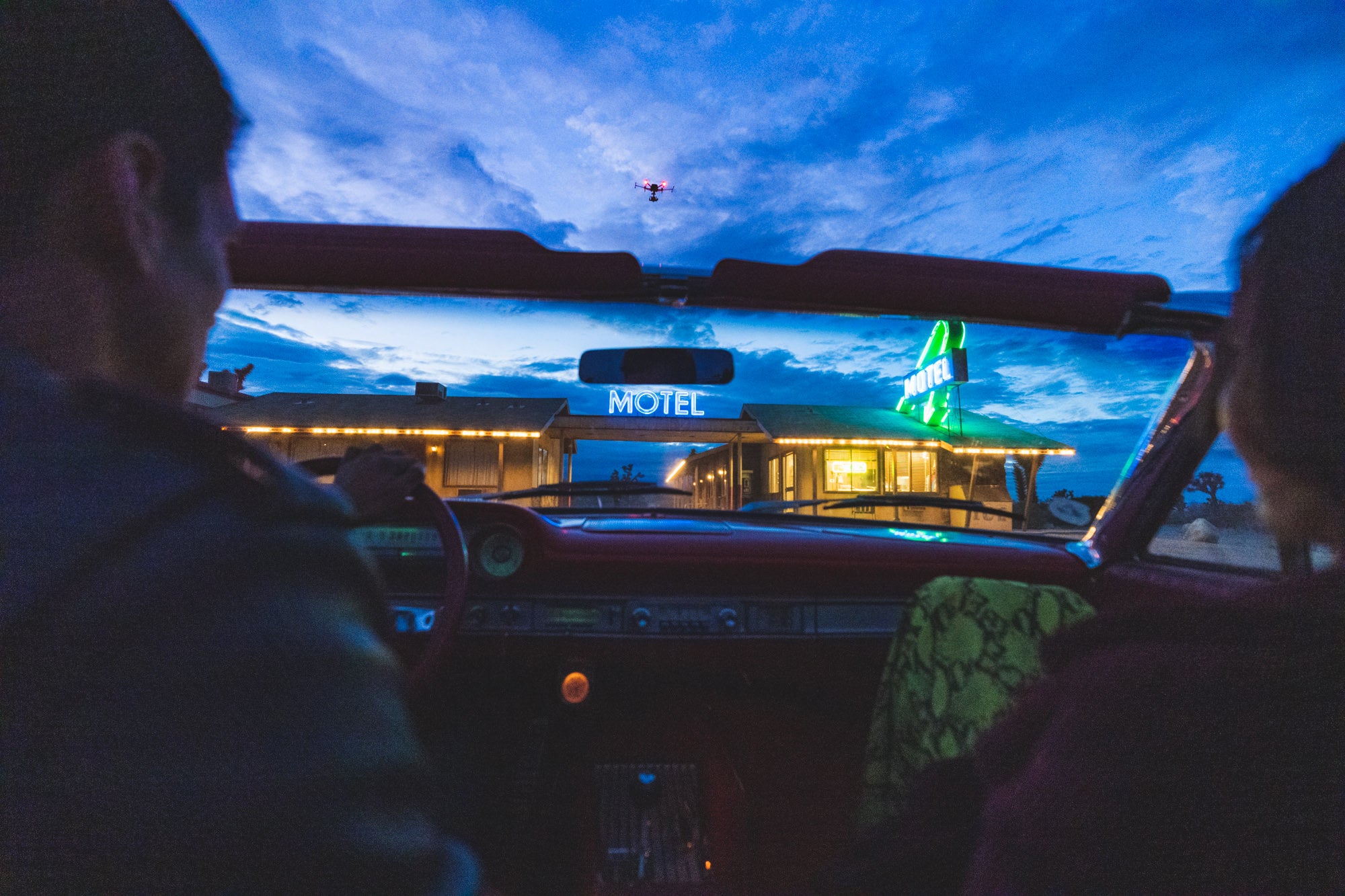 Dyrland adds, “Just capturing that low light footage is still pretty difficult with all drones except for Sony's Airpeak. Having Sony's low light capability and putting that on a drone, I think will open up a whole new realm of filming for drone filmmakers.” 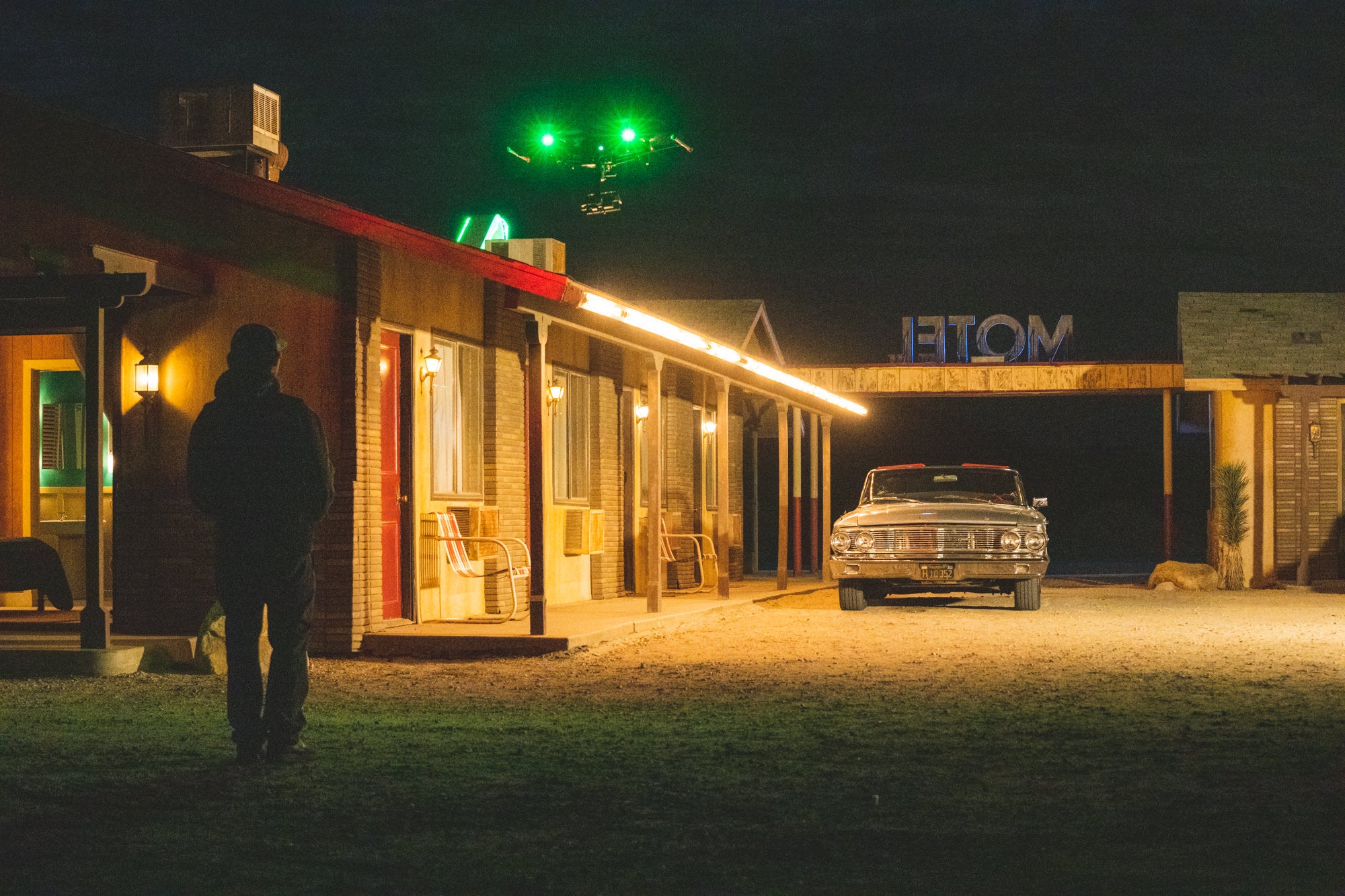 “Airpeak provides solutions the drone industry has yet to lock down,” says Coker. “The small airframe with the camera quality is incredible. It allows me to get into tight spaces with a cinema-grade camera. The intuitive flight customization is useful to achieve different flight dynamics on the fly. The hot swap capabilities make for an efficient workflow. And the Alpha line compatibility that provides camera settings at the pilot's fingertips is very important to me.”