When RCA Records in Nashville solicited bids for the latest music video promoting the band Old Dominion, Director Jim Wright’s treatment was quite specific. The shoot would take place almost entirely at night, at a practical location – a typical motel exterior complete with neon signs and two floors, each with rows of doors. The song, “Hotel Key”, is about a romantic, picture-perfect tryst, and the clip depicts intimate moments in one of the rooms intercut with the full band rocking out in performance mode in the parking lot, against the backdrop of the motel.

Joel Hartz, a multi-talented freelance filmmaker who served as the producer on the project, bid with confidence because he knew that cinematographer James King could deliver. The duo has worked together often over the past two decades.

“James is really good with that type of setup, and making things work very quickly,” says Hartz. “On a one-day shoot, where you’re trying to get completely different exterior and interior looks, that’s essential.”

Step one was finding the right location, which turned out to be in Murfreesboro, Tennessee. Hartz and King had recently heard about the debut of the Sony VENICE camera and thought it was perfectly suited for the task at hand.

“We immediately got really excited about the possibility,” says Hartz. “With dimly lit interiors and bigger night exteriors, the project was the perfect opportunity to take that camera for a spin – to shoot at 2500 ASA, with 15 stops of latitude.” 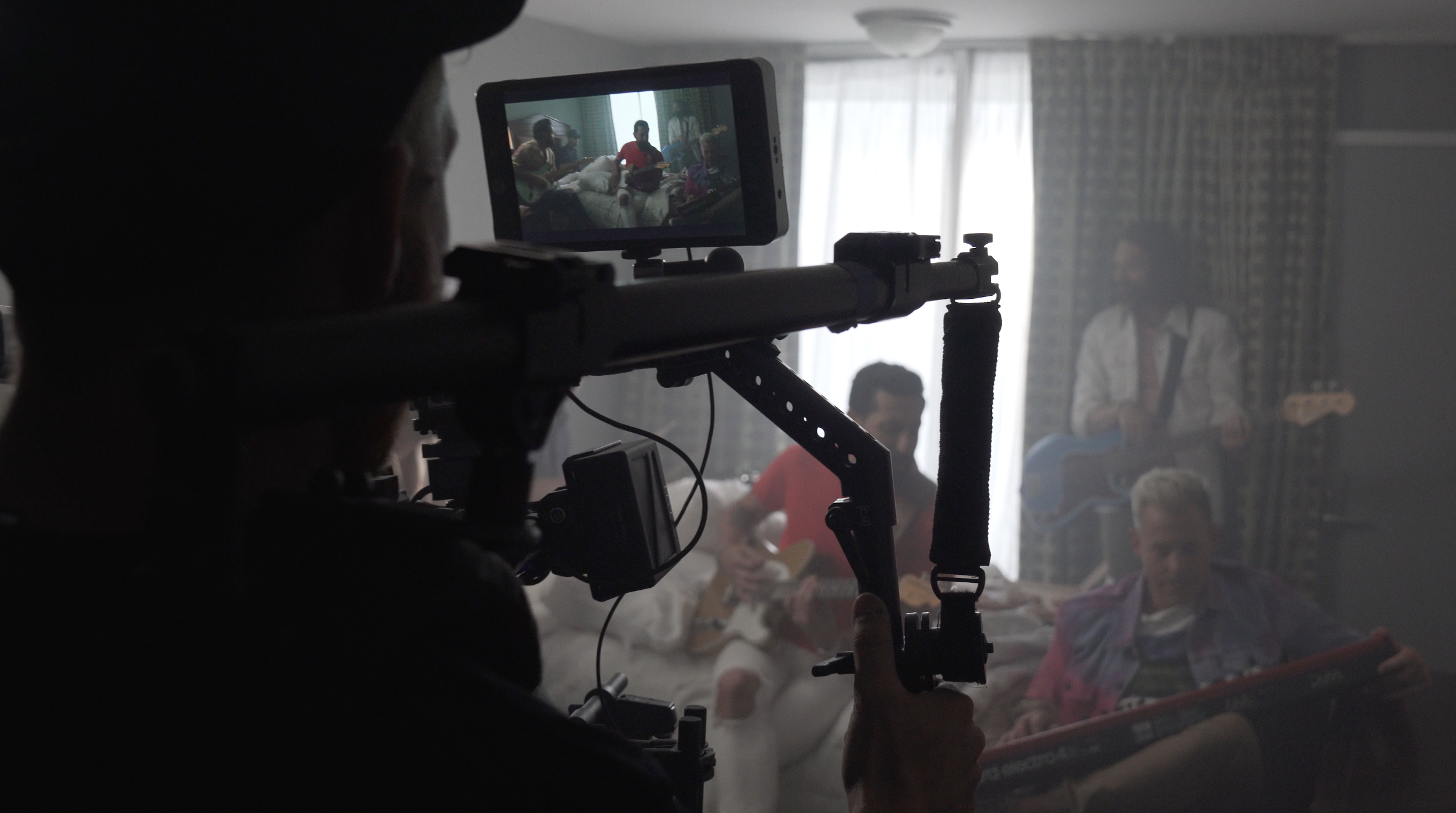 King had shot with the Sony A7S specifically for its low light capability on a previous project and was impressed. After some testing at Doug Bates’ Nashville facility, dbV Rentals, he decided to pair the Sony VENICE with older lenses – Canon K35 glass of the type used on Aliens and American Hustle. They tend to be slightly softer and less contrasty than modern glass and offer a more distinctive flare than the SuperSpeeds.

“We were trying to give it something that would give it a softer, more filmic look,” says King. The combination of the older lenses and the Sony VENICE was the key to the clip’s look and feel. Color was another important consideration – grungy, realistic neon red was crucial to the images they envisioned. Mixed color temperatures would need to be captured and reproduced gracefully, and skin tones would need to feel natural and attractive.

“We shot RED for years, but RED would not have held the natural color saturation coming off the signage outside the motel,” says King. “We wanted that true ruby-red kind of look and pollution to the whole video, to make it just a little bit dirty and real. If you shoot a RED camera, the oversaturated colors can fall apart, and you will see this bluish blob take over wherever the color space can’t hold up. The Sony F65 is famously good with color, so we wanted to give the VENICE a try.”

“Color saturation was pivotal,” says King. “I couldn’t have been happier with the way the colors held up. We had a pretty good monitor on set, and at one point Joel thought we might need to pull back because the color was clipping on the monitor. We did a few takes with the image a little hotter and a little more saturated, and guess what? When we got into post, we found that what was blowing out on the monitor, the camera was retaining. We could have gone up two stops!”

“Color was another important consideration – grungy, realistic neon red was crucial to the images they envisioned. Mixed color temperatures would need to be captured and reproduced gracefully, and skin tones would need to feel natural and attractive.” – James King

The camera’s latitude translates into increased creative freedom, but it’s also helpful from a purely logistical perspective. “It was a tight budget considering everything that we were trying to do,” says Hartz. “The sensitivity of the camera definitely allowed us to get more shots with a lot less equipment.”

“At one point on the interiors we were lighting the main subjects with two 40-watt bulbs and a single quasar tube,” says King. “Other cameras allow you to bump from 800 ASA to 1250, and it’s usable, but you begin to get noise,” says King. “It turns softer, and gets a little mushy – a little plastic-y or cartoony. If you zoom in, you might see little red and blue speckles. The images from the VENICE are not like that. At a 2500 ASA base, noise is more grain-like and filmic, and the noise is totally removable because of the amount of data that is there.

“Digital sensors basically work in a bracket formation,” says the cinematographer. “If you push your ASA higher, you can usually get more roll-off on the top end. If you go lower to get a cleaner image, you lose a stop or two in your highlights, and it gets crunchy – the roll-off is not as sweet. With the VENICE, I felt like I had three or four great stops in the darkness, and then it went all of the way up – six or seven stops – and the roll-off was just as nice, even when I shifted the ASA down. I thought the highlights would get crunched out like they would on any other camera. I got into post and the detail was all there. We could have pushed this thing several different ways in color grade – the information was so robust, which gives you the leverage to do that.”

The cameras were set to record in 4K 17:9 in Sony’s X-OCN format using the Sony AXS-R7 recorder. That format was used throughout the process. After capture, the files were downloaded with AXS-AR1 AXS Memory and Thunderbolt-attached card reader. King’s crew had four AXS 512 GB cards on set, but only cycled three cards while shooting nonstop. He reports that Braden Winfrey, the DIT, never got behind.

Images could be previewed in RAW Viewer, or simply ingested into Premiere Pro and played back natively. King edited the video himself in order to learn first‑hand about working with the X-OCN files. He used a MacBookPro 15-inch 3.1Ghz i7 with 16GB RAM to edit in Premiere Pro.

“The Mac handled the X-OCN files easily while I edited multi-track 4K footage,” he says. “We shot in both 23.98 and 60p, some of which I converted to slow motion in Premiere.” (More recent editions of the Sony VENICE software offer more in-camera frame rate options.) Once the edit was locked, King generated an EDL and sent the hard drive with the original X-OCN files to Apache for the color grade. DaVinci Resolve was used with no issues.

From the producer’s perspective, Hartz sees the basic equations changing, with beneficial effects in sectors like music video and indie films. “Budgets have come down so much from what they were ten years ago,” he says. “If you’re trying to do so much more with less, keeping your electrical down, tools like this camera and LED lighting allow us the ability to get a really good-quality look in spite of tighter budgets. For an independent film, especially something that takes place at night, it’s going to be great.”

King agrees: “I almost hate to say it because I’m a film guy,” he says. “But the technology is getting to a turning point. We’re doing things with exposure that film could never have done. With the ability to shoot at 2500 ASA, you’re going to see low light cinematography like you’ve never seen, because everybody will be comfortable with it. We’ll know what we’re getting. We can peer into the shadows. Over the next four or five years, people are going to try a lot of new things. We’re already getting into a more naturalistic movement in cinematography again, and I think this is just going to knock it out of the park.” 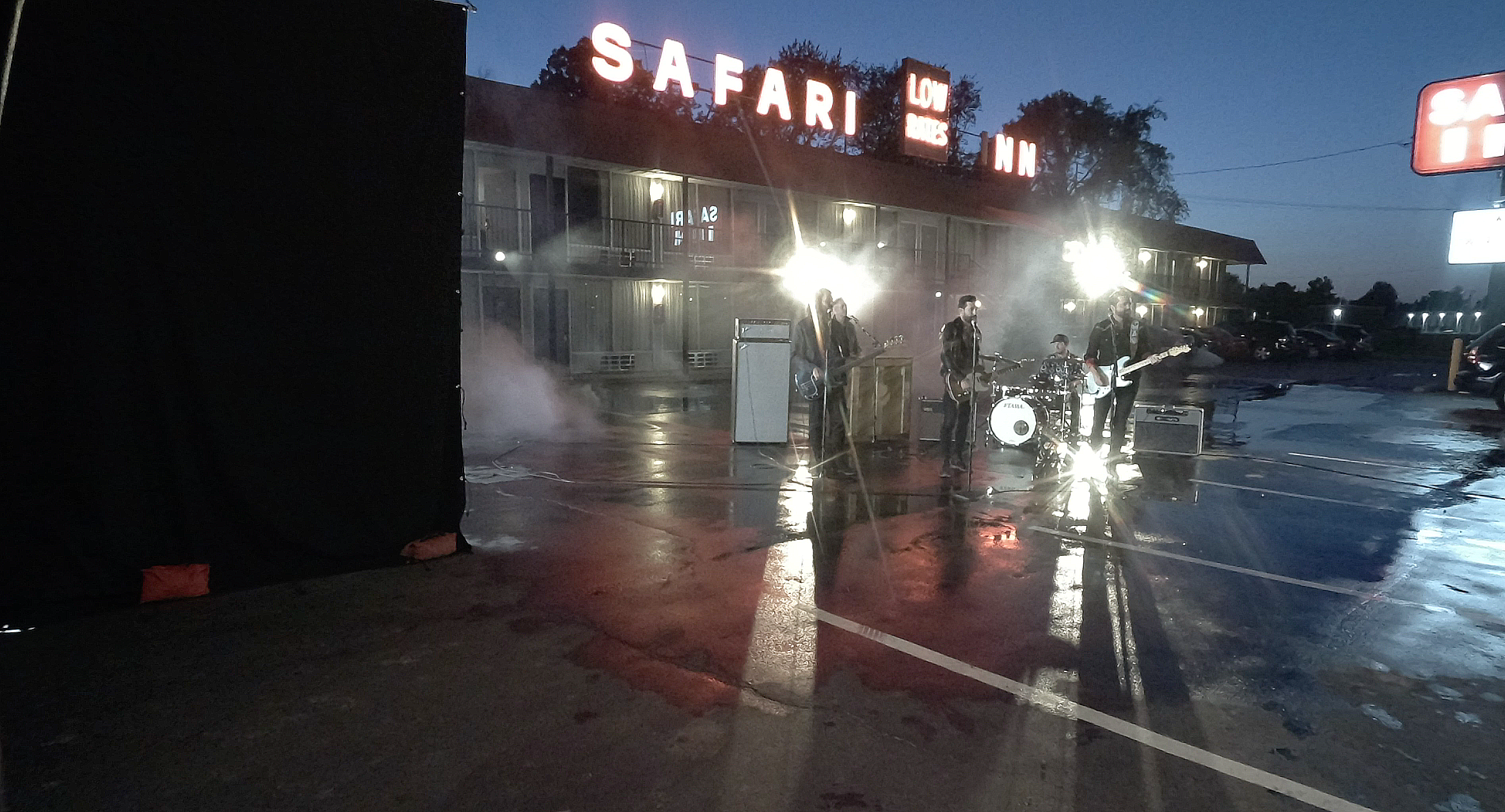 “I almost hate to say it because I’m a film guy,” he says. “But the technology is getting to a turning point. We’re doing things with exposure that film could never have done.” – James King