5 Takeaways from the SonyCine Screening of Avatar: The Way of Water

Last week, there was a line around the Grauman's Chinese Theatre in Hollywood for a special screening of Avatar: The Way of Water in 3D IMAX. The screening, presented by SonyCine in partnership with Shot Deck, gathered together a theater full of filmmakers, and featured Avatar’s producer Jon Landau, Oscar award-winning cinematographer Russell Carpenter ASC (Titanic), chief lighting technician Len Levine and 3D Systems Engineer Patrick Campbell in a conversation moderated by Oscar nominated cinematographer Lawrence Sher ASC (Joker).

I had just gotten off a plane from Arizona to make it just in time for the experience. Riding the people mover at LAX, the walls were lined with Avatar posters. Driving to Grauman’s, it seemed like every other billboard had an Avatar character staring back at me. It had been 13 years since the first Avatar, and I got to watch the new one in a theater full of the filmmakers.

What was it like seeing the Avatar: The Way of Water opening week of 2022?

Here are a few takeaways to sum it up!

Here is something bold to chew on: Avatar: The Way of Water alternates between 24 FPS and 48 FPS.

The detail of the world of Pandora that you view through 3D glasses is absolutely unparalleled. If you watch the new Avatar closely, you might notice a subtle difference between fast paced and slower paced scenes. We all know about the process of color grading. But have you heard of motion grading? On the new Avatar, each scene could be “motion graded” depending upon what frame rate James Cameron wanted for each scene. A fairly static dialogue scene might be cranked down to 24 FPS for the cinematic familiarity of 24 FPS. A fast-paced action sequence, however, is almost certainly at 48 FPS, not only to give the viewer the most possible judder-free detail, but to make those scenes easier for all viewers to watch.

I remember watching the first Avatar in theaters. I got there late, and had to sit far too close to the screen than I would have liked. I stare at footage every day, but something about the action sequences in particular didn’t agree with my eyeball-to-brain communication. They made me squeamish, even causing me to break out in a sweat. While I was determined not to let it affect me, I distinctly remember that I had to take breaks, pulling off my 3D glasses to stare at the wall and recalibrate my senses.

The 3D experience of watching Avatar: The Way of Water was thankfully, completely different, and I credit it entirely with this high frame rate. I didn’t notice anyone else in the theater taking off their 3D glasses either. Not to mention, it just looked and felt cool to see 48 FPS done right for the first time. You could really take in scenes at 48 FPS in a much fuller way. Audiences were pretty skeptical with the high frame rates of The Hobbit and Gemini Man. In Avatar: the Way of Water, it finally works. 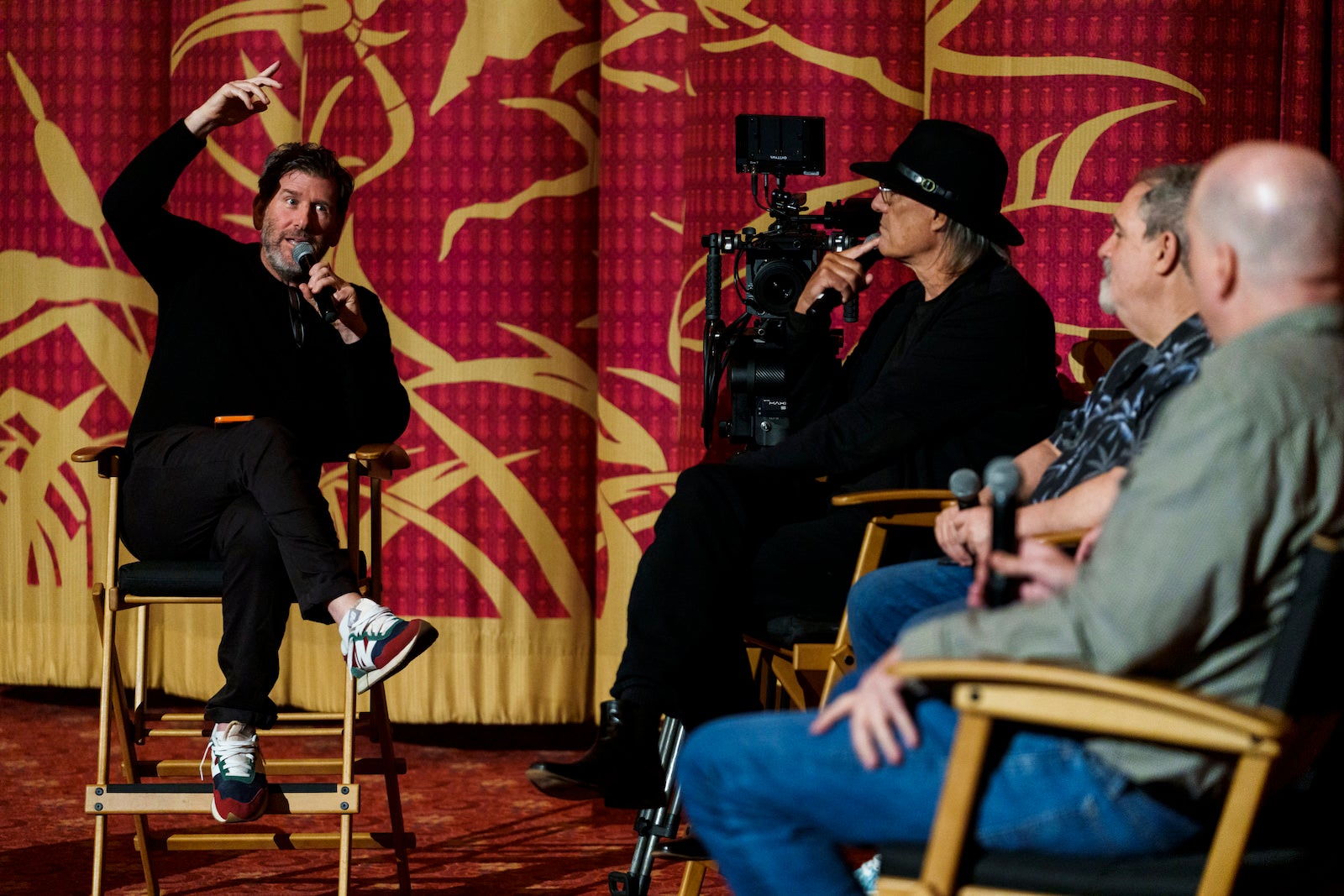 Lawrence Sher jokingly asked what it is like to work with James Cameron, who is known throughout the industry for his eccentric ideas for new technology. (To give you an example, Cameron dove into the deep of the Mariana Trench in a submarine that he designed himself!)

According to Russell Carpenter, after the first Avatar, James Cameron asked for a camera where the front could be decoupled from the back. According to Jon Landau, he and the team then took the idea to Sony engineers -- who were keen to take up the challenge. They initially worked with prototypes for such a camera that the engineers at the time called the “J cam” or the James Cameron camera.

As cinematographers like Carpenter and Claudio Miranda continued giving feedback to Sony, and engineers continued to develop and advance camera technology over the last decade, the Sony VENICE came to be created with its crucial counterpart, the Rialto. It was the Sony VENICE and Rialto that made the visual wonder of Avatar: The Way of Water possible. Read the next takeaway to hear about the spectacular success of those visuals!

3) The audience gasped loudest at the ocean and its inhabitants

I guess it’s no surprise that the audience was audibly moved by the visual wonder of the underwater world. It’s “the way of water” and it’s absolutely stunning. From floating jellyfish-like creatures to anemone burials, the film creates an intricate, beautiful world. It was spellbinding!

One surprise, however, was just how much the audience resonated with the underwater creatures called the tulkun. I won’t go into any details so as not to spoil anything, but suffice to say the tulkun are highly intelligent whale-like alien creatures that inhabit the seas of Pandora. During the tulkun storylines, I heard gasps. I could see friends turning to look at each other in disbelief.

The visual world-building is one part of it, but knowing that James Cameron has become a dedicated ocean activist over the last decade, it makes sense that this part of the story would be so compelling. In addition to calling out human impact on the oceans, Cameron has made documentaries on the subject, including a NatGeo collaboration called Secrets of the Whales, where he no doubt began thinking of analog traits for the Pandora species of tulkun.

Before the screening started, I talked to a young person filling up at the free popcorn bar about how she felt about seeing the new Avatar. “I’m very excited,” she said, followed by a burst of laughter at how young she would have been when the first Avatar came out. “I don’t really remember the first one!”

Fortunately for the young viewers, the new characters are some of the most striking. Based on this audience, I don’t think you’ll ever forget the underwater characters of Pandora.

Acting was central to the film, and technology allowed for that

Blue Na’vi, alien planet, space whale-tulkun, how does it feel so real when it is so fantastical? 3D is only part of the equation, and the other part is the performance.

The acting from familiar faces like Sam Worthington and Zoe Saldana (as well as cameos from new ones like Jemaine Clement) was at the forefront of the film, and why it resonated so powerfully with the audience. One of the first things producer Jon Landau said in the Q&A is how with this film, the performance motivated the technology, and not the other way around. Due to the innovative strides in virtual production by the time Avatar: The Way of Water was filmed, they were able to build each moment of the movie based on the best takes with the actors. James Cameron would pick the strongest performance, and they could build the rest of the scene and world around that.

Not only was it amazing to have filmmakers come up on stage to talk about the process after the screening, it was so much fun to watch the film with an audience made of veritable film icons.

I passed Emmy award-winning filmmaker Curt Morgan (Art of Flight) on the way into the theater, caught a glimpse of James Kniest (American Horror Stories, The Midnight Club) a row in front of me, and saw legendary Rob McLachlan (Game of Thrones, American Gigolo) talking shop next to the station with Portos and mimosas.

It’s great to see what a normal audience will “ooh” and “ahh” over in a movie; the collective experience of being in a movie theater never gets old. To watch a movie in a theater full of some or the most artistic voices in the industry, including many of the filmmakers who made Avatar: The Way of Water, was an experience on its own.