As a pandemic rages around the world in real-time, streaming services are gaining viewers with new shows such as “Motherland: Fort Salem,” which premiered March 18th on Freeform.

The show takes place in an alternate America where witches ended their persecution by cutting a deal with the government to fight for the country. Three young witches, played by Taylor Hickson, Ashley Nicole Williams and Jessica Sutton meet up in basic training where they are taught combat magic to defend the country. Created by Eliot Laurence, the show was shot in Vancouver, BC. Cinematographer, Jon Joffin, ASC, shot the pilot and first episode, subsequently alternating with cinematographer Michael Wale, CSC. Joffin noted he is proud to have been a part of “Motherland: Fort Salem.” “I was immediately attracted to the project when I read the pilot script -- women running the world, defending their nation using song to control weather and fight huge battles. Grand, yet at the same time intimate… ripe with visual opportunity. It was an extremely creative and rewarding shoot.”

Choosing to capture the show on Sony VENICE, “because it feels very film-like to me and that is why I feel so at home with it,” Joffin paired it with two sets of Zeiss Supreme Primes. He also received a pre-release of the 135mm, “Which rounded out our set nicely. We did not use zoom lenses. We wanted to frame each shot very deliberately. We wanted our world to look epic and cinematic, and Freeform allowed us to shoot in the 2:1 format. Most of the show was shot wide open, in order to isolate the characters and get a painterly background blur. The lensing combined with the VENICE sensor made for a rich cinematic look.” Joffin said he sometimes would tweak the shutter and open it up if needed, to get more light into the scene.

Joffin worked closely with DIT David Skidmore to develop the base look and workflow from set to post. Richard Cordes at Encore Vancouver worked nights at the lab to make sure that what they saw on set was replicated though the color pipeline. Colorist Gareth Cook from The Foundation, worked hard to ensure that we maintained our intended look. “We found that establishing the intended look at the beginning helped retain it in the finished product. It was a very intentional process.” 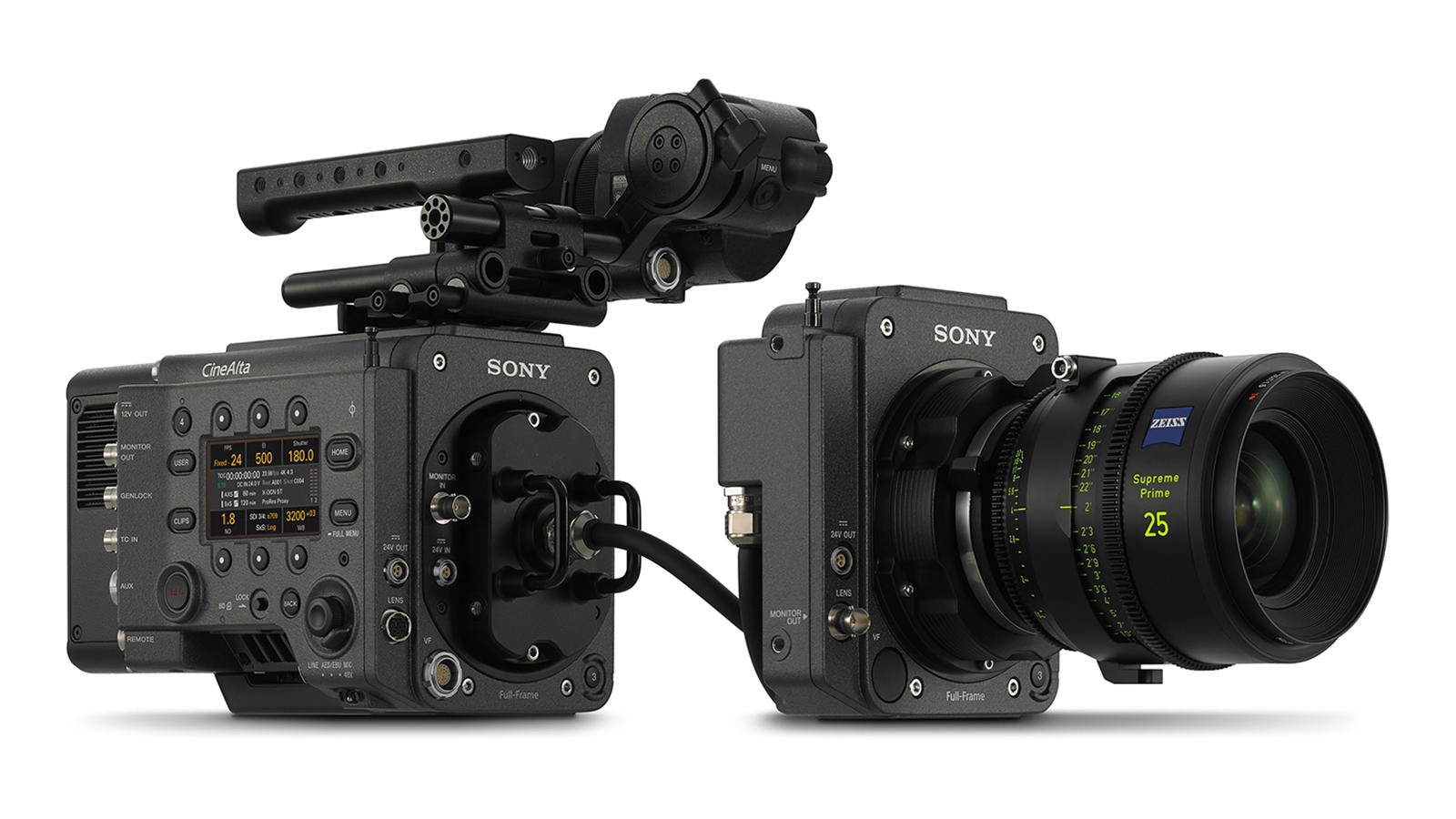 His favorite features about the VENICE camera include: how tonal and film-like the image is; how compact the VENICE is for a full-frame sensor; and how reliable the VENICE is. “Such incredible flexibility: dual base ISO, Super35 or full frame, and the Rialto is an amazing tool, which allows you to get the camera into tiny spaces. Also, the full set of internal NDs saves an incredible amount of time on set, and the image and color space is superb!”

“Motherland: Fort Salem,” has a period feel. Since technology doesn’t play a part in the show, the intention was to create a somewhat vintage look. “I introduced a slight color temperature shift and subtly colored the lights, but believe in keeping color temperatures for skin tones in a neutral space, then push with the LUT on set and finish in color timing. Nothing heavy-handed was done on set, so I could see what I was shooting.”

With a variety of skin tones between the witches, Joffin noted, “I didn’t have to do much to handle the ranges; the VENICE camera, with all its rich colors, handled it beautifully.” 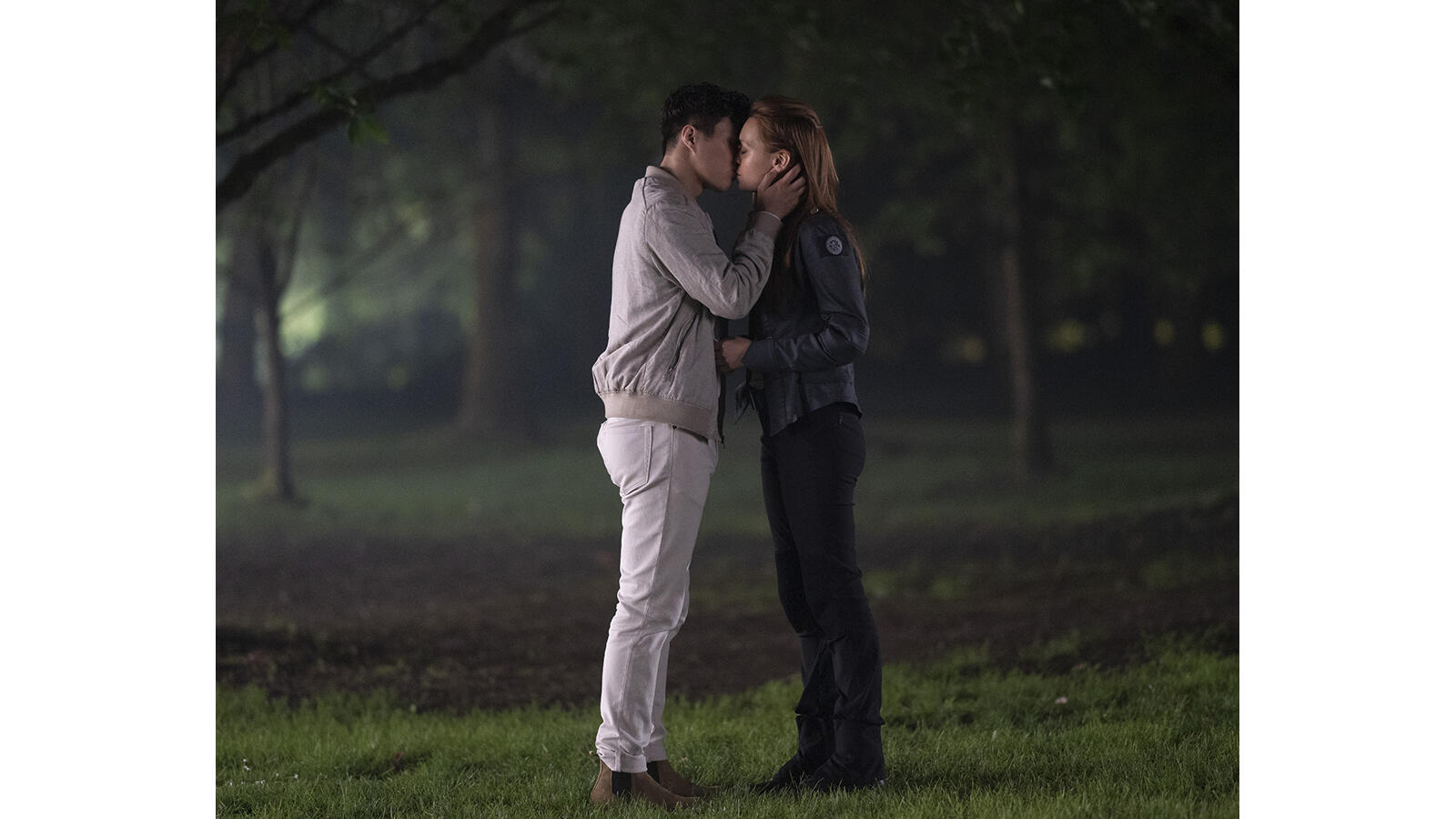 In an introductory scene with General Alder, the head witch, and her Biddies, her office evokes an aged look. Joffin said he used a lot of tungsten light inside the room and ARRI Max lights coming through the window with 1/2 straw gel. “I don’t like red highlights, so I tend to stick with yellows. I like the warmth of it,” he explained. “We shot with a higher color temperature on the VENICE, tweaked the color temperature to warm it up, and took it further in color timing.”

As a romance ensues between two of the witches in training, they sneak out at night to a secluded spot where they take a government-regulated drug ‘salva’ which is typically used for combat drops and begin to float. Joffin worked closely with the visual effects supervisor during the show, because, as he explained, “having light that ties into the visual effects really makes it believable. That scene was very romantic and a beautiful idea.”

The scene required both in-camera effects as well as digital effects. They started off on location with 18K HMIs, lighting balloons and 12x12 book lights on the ground, shooting the girls on the ground and background plates for visual effects. Then they shot part of the scene on stage because they needed rigs to float the girls. Stage lighting mimicked the outdoor lighting, and because they wanted the light to be changing gently, Joffin used skypanels and an overhead lightbox, undulating the colors. He referred to a Japanese photographer, Yume Cyan, whose stunning work concentrated on fireflies, “so we could ask Folks VFX to create fireflies around them to make it more magical. The fireflies also came up in the graveyard because Eliot, the creator, didn’t want this to evoke a typical magic show, he wanted something organic.” Together with wind effects that had the girls’ hair moving like snakes, visual effects was able to create a magical experience that matched the practical lighting. 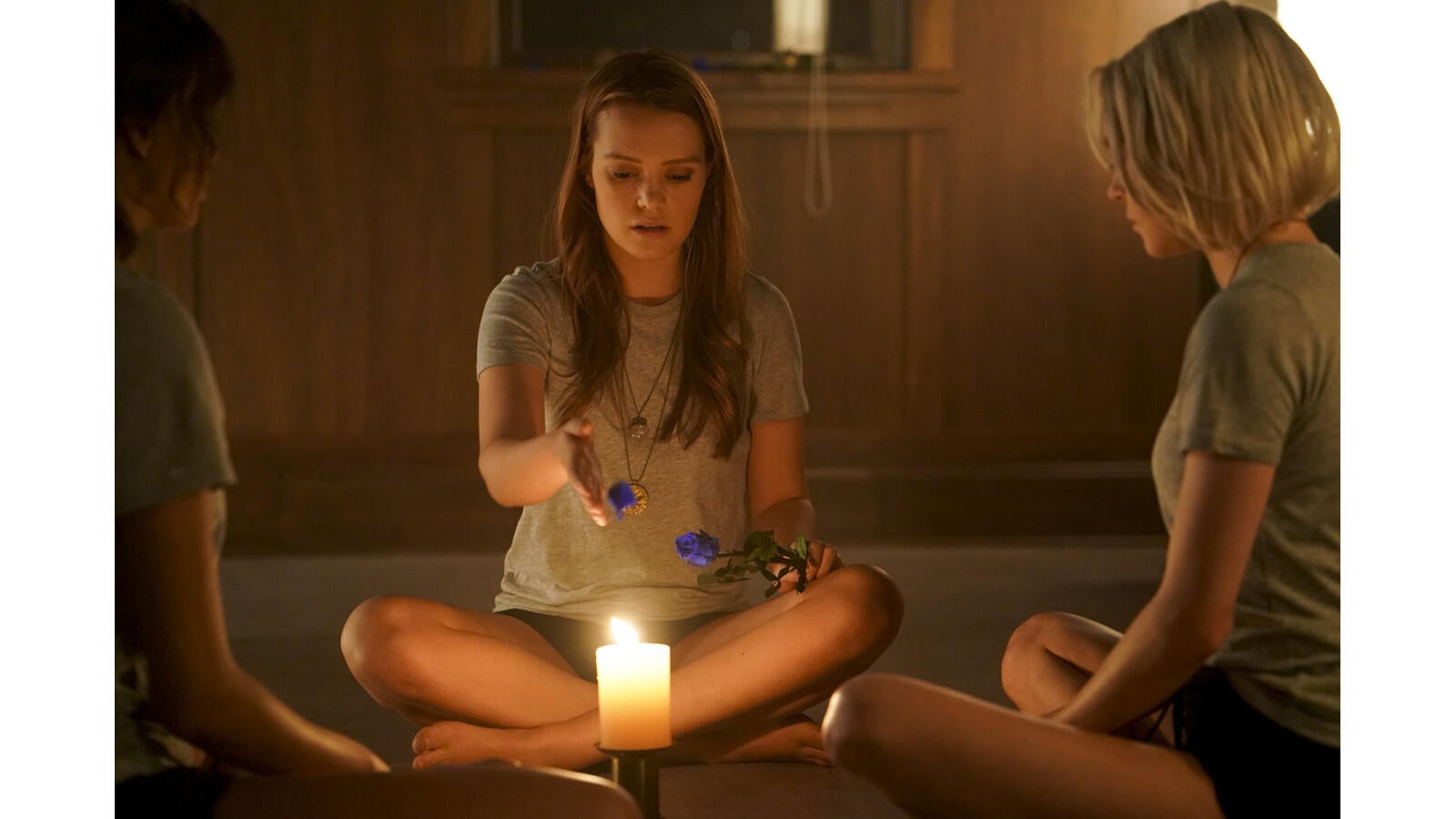 Joffin described a scene where the girls, as a trio, manifest their power with their voices. The location was a choral chamber attached to the side of a theatre arts building. He started with a 50-foot Technocrane and pulled back into a wide shot. “We turned most of the practical lighting off. There were little orange lights that we really liked as pin sources but they were going all over the actors’ faces, so I had the grips build approximately 40 boxes, made out of showcard, and kept the lights in the scene. The cards kept the lights from going all over. Then we added 800 watt Joker Lekos with 10 degree barrels, coming straight down and bouncing off of the tables as the main light source,” explained Joffin. As the scene progressed and things start getting wild in the room, “we needed an interactive light, so we added a Martin profile light bounced into a material that was a cool, iridescent silver. When we mounted those up on bounces, the undulating light gave it a flicker effect.” Joffin noted that in his opinion, the trick with interactive lighting is to not get carried away, but do it subtly.

The in-camera filters in the VENICE were a huge plus for Joffin, especially when shooting wide open. “I love that you are always able to drop in filters; it’s amazing to have the one-stop increments. Plus, there are no matching issues with the colors of the NDs.” He expressed how directors love it too, because “frankly, we just want to shoot, and get more shots done and no one wants to wait for a physical filter.” 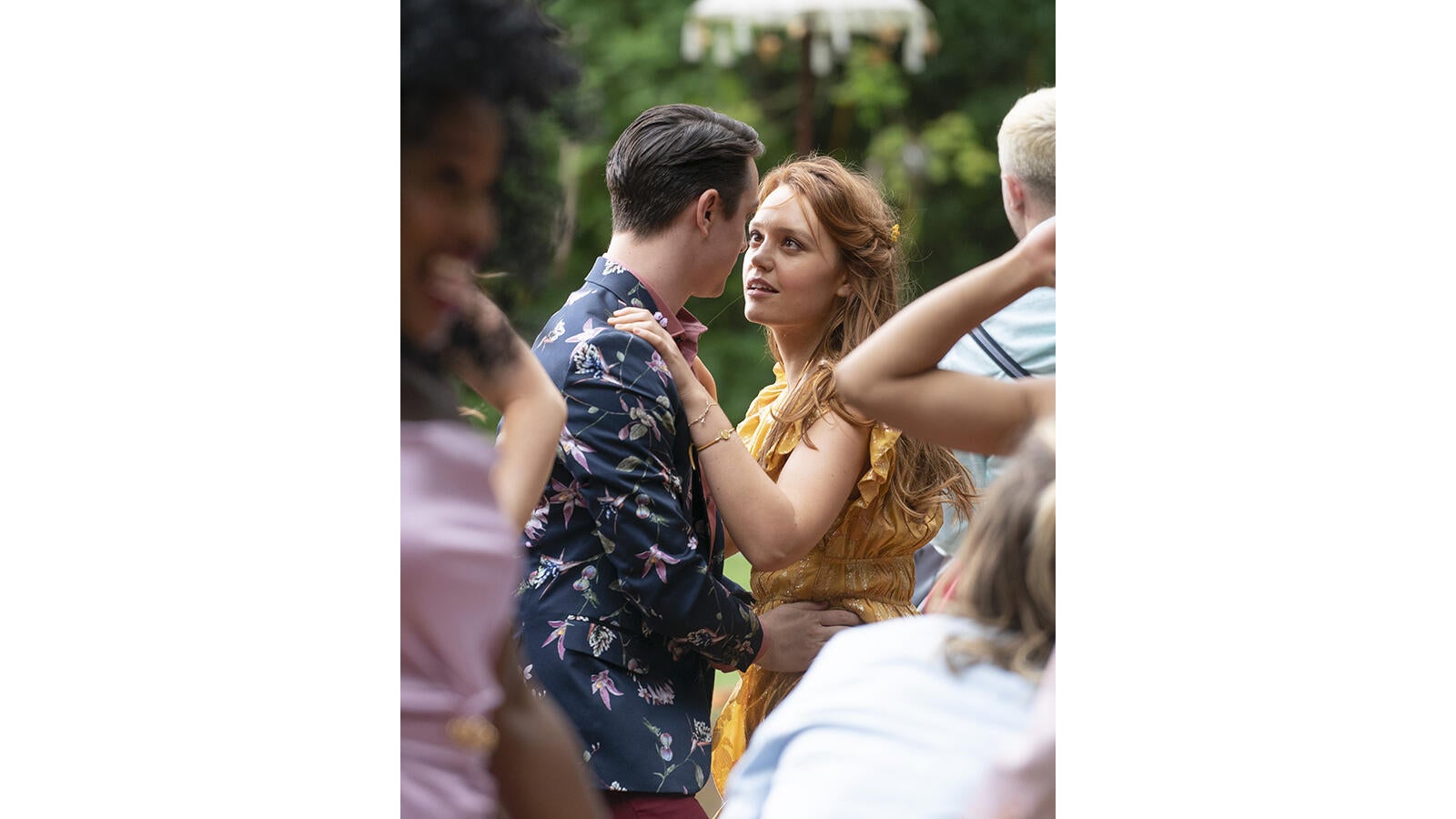 Aside from the heavy visual effects scenes, Joffin mentioned that they took advantage of dusk and sunset to shoot daylight scenes. In the scene where the two lovers first meet, it occurs outside in a field.  Since the show is so much about the witches controlling weather, “We wanted to get the full range of the day, not simply night and day, we felt it was the right thing to do, to convey the mood of their romantic meeting.” They shot the whole scene as the sun was going down, “it was a beautiful time of day. Every angle was backlit. We fought really hard to get those dusk and sunset scenes. We had to shoot really fast to get it. It was very challenging but having the dual ISO of the VENICE in our back pockets was very comforting.”

Another scene that was shot at dusk is a scene, “that was quite tricky to achieve,” said Joffin. The girls are in the mess hall after the trio has sung in the choral chamber. They are celebrating how well they did. “It was all shot at dusk, and it involved changing the balance of the light outside as it got progressively darker with the girls inside. I had to find a way to mix the warmth inside with the blue light outside and do it very quickly.”

Joffin noted that he and his team “were very pleased with the final image. We all felt it was rich and cinematic, with gorgeous colors and skin tones.”

To read about how "Motherland's" pilot was shot, see https://sonycine.com/news/joffin-adelson-lend-6k-sweep-sorcery-tale/ 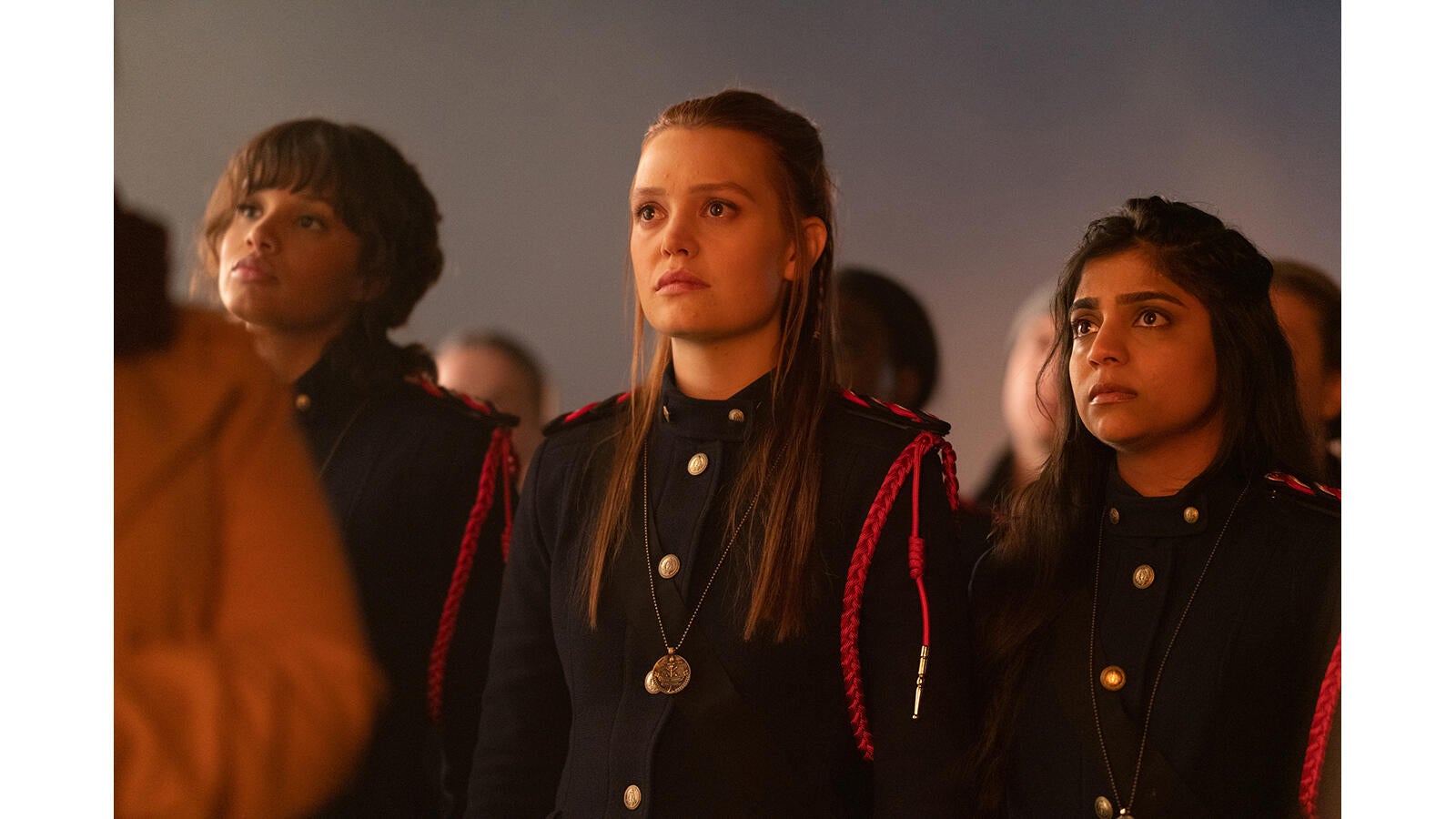