Some years ago, I did a big studio film with Wesley Snipes, Alan Alda, and Diana Lane called "Murder at 1600.” We had some spectacular action sequences in that film, including a chase sequence at night in downtown Toronto.

When working on big productions (unless they are studio-based), a cinematographer and production designer will work closely with the location manager to find the key locations. It is a different process than looking for locations on an independent film. On big films or major TV series, you are looking for the ideal location, not the cheapest. You still want the locations to be workable, but first of all, they have to work creatively, because these size films certainly aren't only about the story; they are also about the visceral; those other things that affect an audience in the emotional gut. 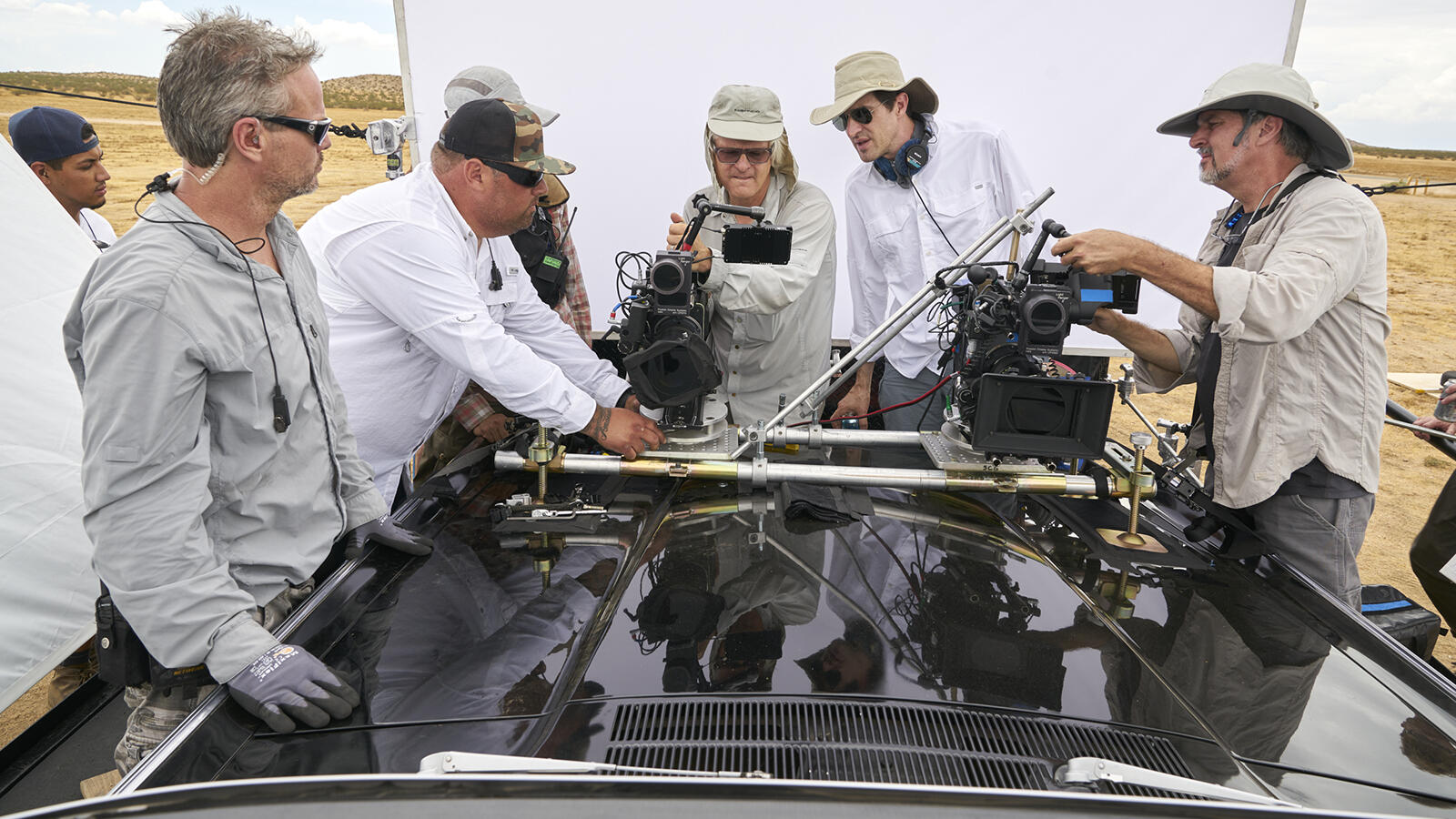 The location manager found us a location we liked for the city chase sequence, a six-block area in central Toronto. The location manager approached the municipality's representatives and it was agreed they would turn the area over to us for filming. Unlike on "Magic City,” we wouldn't be building a set, and it wasn't a period film. Still, it was a very big undertaking.

As the cinematographer, I had a vision of what I wanted for the sequence, which I developed with the director in pre-production. This was essential. If I didn't know what I wanted going in, I couldn't co-ordinate with the many other departments who would soon become involved. On a small film, crew members might do several jobs; on big films, you have many people doing specialist jobs, so you have to be able to collaborate and negotiate with other skilled artists and technicians.

For this particular sequence, the first person I spoke with was my gaffer. The lighting set-up would be vast. As it was a night time shoot, everything would have to be lit. We decided to use giant lighting sources on 120 ft telescoping arms, called Mosco lights (we actually used a variation called  Dwight Lights). Moving these huge devices wasn't easy, and they take a lot of space, so we knew we would have to use a pre-rig crew to position them. The same crew would place the other 250 lights we hid in the streets at other key areas. This pre-rigging took a long time. It would be impossible to do all that rigging on a shooting day. Rigging on a shooting day also means you have less shooting time as the crew waits for you to finish - if you finish. Big films, therefore, have a lot of pre-rigging. This particular set-up was so big it needed a big pre-rig crew, a big lighting crew, and a big grip crew. Of course, the producers had to approve the work, but they were experienced and understood what we were trying to do. It was agreed and we proceeded. 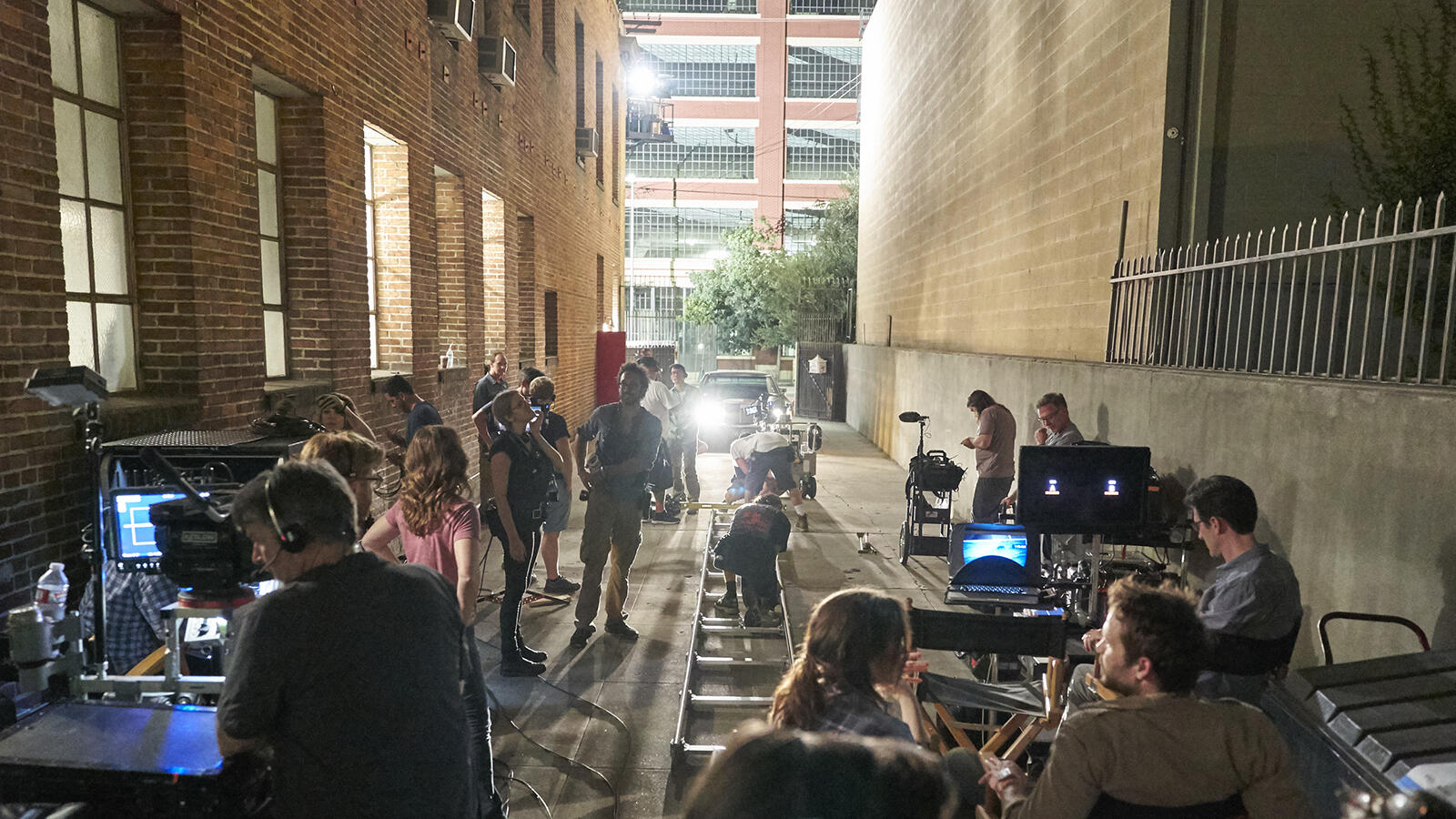 Just a chase through city streets didn't seem as interesting as it might be for one of the major set pieces of the film, so in keeping with the film's dark vision, we decided to add rain. Of course, you can't rely on the weather, so we had to create the rain. I talked to the effects people about rain towers, which are enormous sprinkler systems that are mounted high above the street and through them, water shoots out through hundreds of nozzles, giving us rain. But rain towers need a lot of tubing and a lot of water passing through pushed by powerful pumps. They also need a lot of rigging. But the effect is spectacular, and the producers agreed to let us have the towers.

I had eight camera crews, each with a crew of four, to cover all the action. We also added extra hair, makeup, and costume crews to deal with the extras and stunt people. All this in addition to the sound crew, the production vehicle drivers, the caterers, etc., etc., etc. A night shoot like this could have a combined cast and crew number of four or five hundred people, or more. The point is this; because so many things happen simultaneously on big films, big films need big crews. There is no other option. But there are even better reasons for big crews. 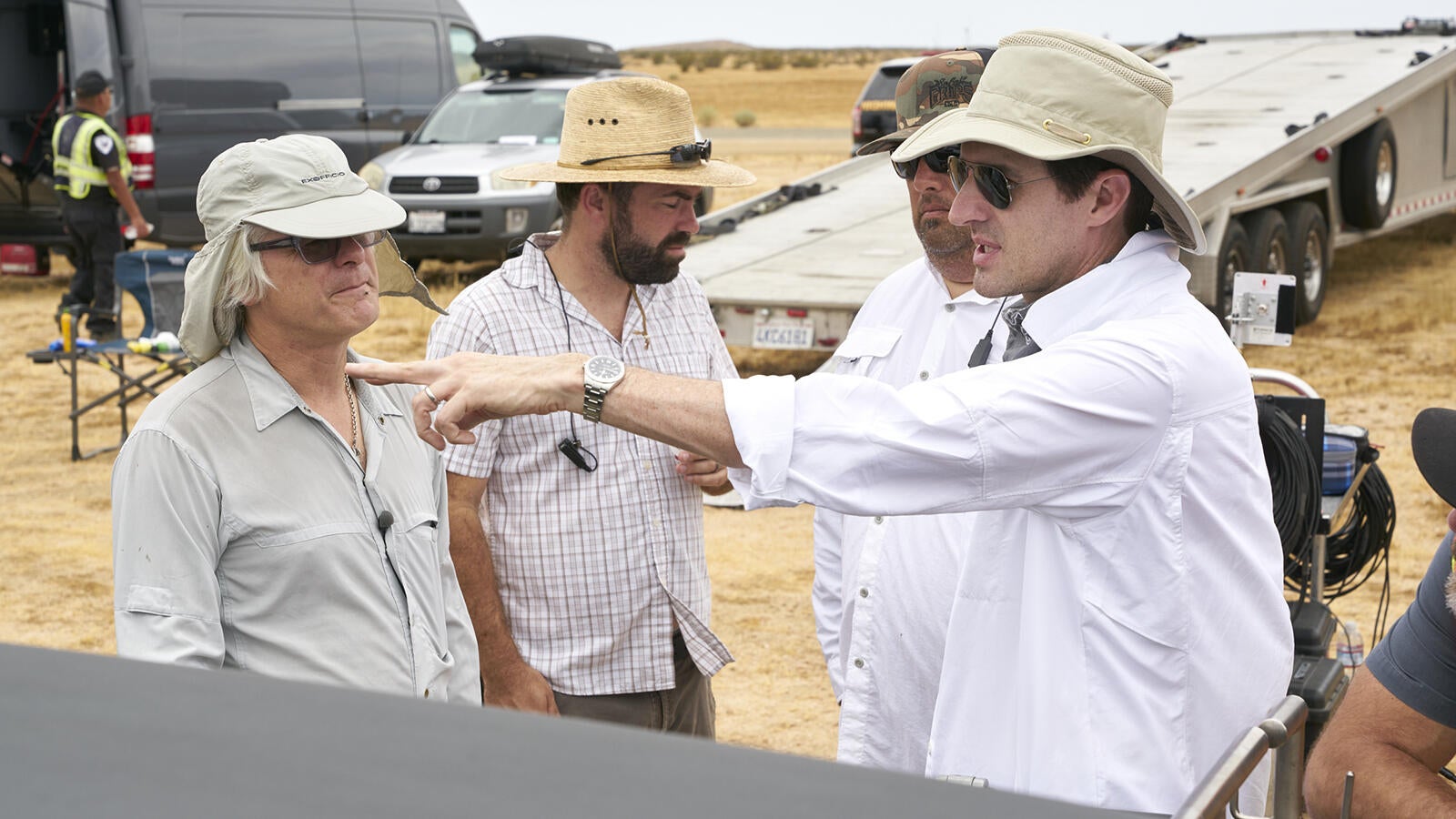 Large productions are expensive, and a production that falls behind gets much more expensive. The good news is that big crews keep things moving at speed. When a department is under-crewed, it slows things down. Imagine in the above example, only having a single electrician. Every time that electrician has to go back to the truck for a light, everything else would stop or have to wait. Even with three electricians, and hundreds of lights, the crew and actors were still going to be kept waiting. Twenty electricians and thirty grips turned out to be the right number. Crew levels have to be proportional to the amount and complexity of the work. A person moving up to bigger films has to be ready to work with bigger crews and understand their advantage.

With so many people working together, organization, communication, and the ability to work with other, sometimes complex people becomes a very important skill for a person to have who wants to move into this world. A crew member on a big project must be able to express their needs, to share their creative vision and help others make their own creative and technical contribution or they will not succeed. 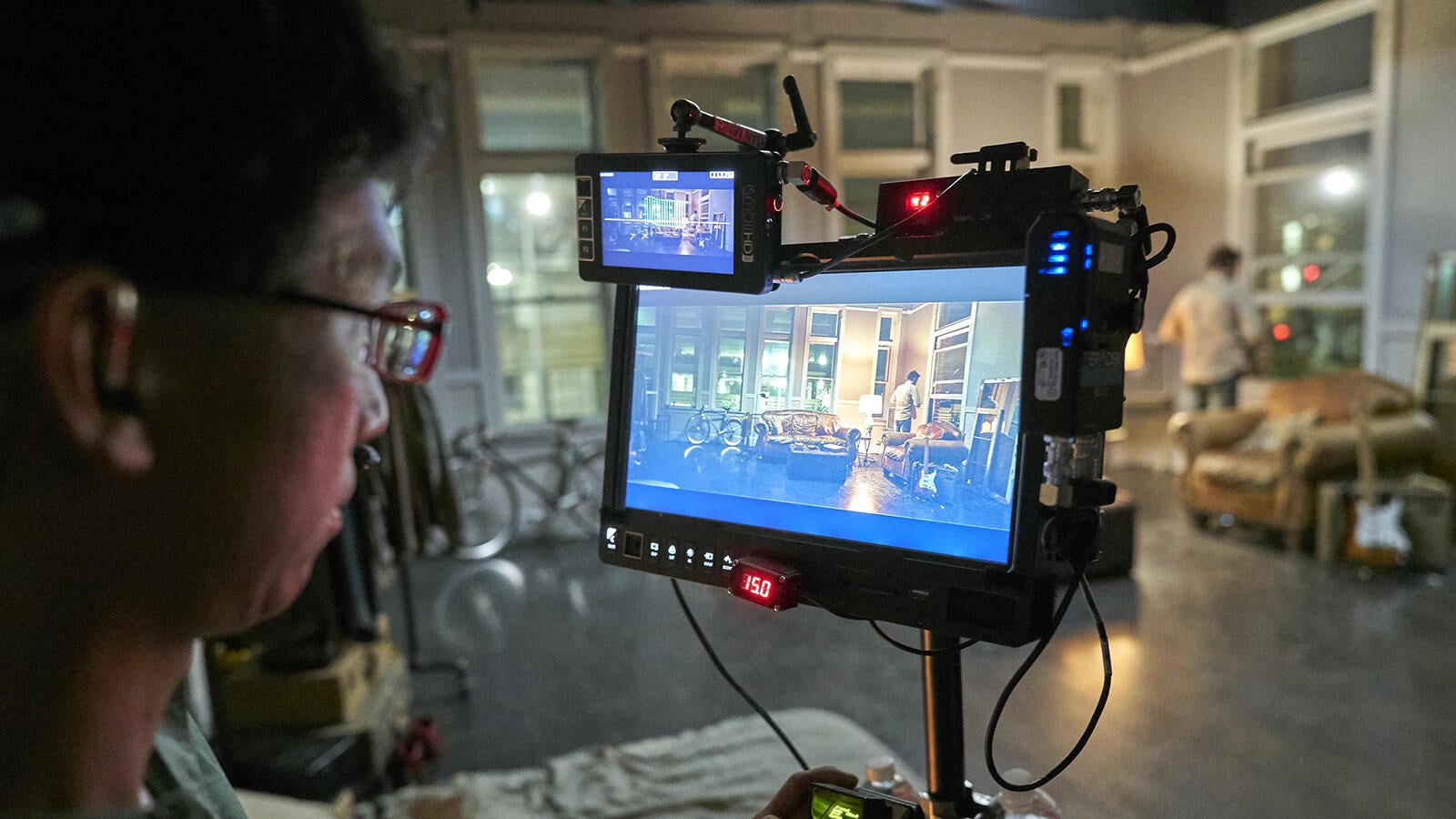 Big films need big crews, but not just any crew. Big films are high-risk enterprises where a great deal of money is at play, and a single mistake could jeopardize the entire project. It's like driving a very expensive car with a great many steering wheels. You only need one person to turn the wrong direction, and the whole thing might crash. So many people are driving on a film, they need to be coordinated. On independent films, we might hire friends or people we have known for a while. Sometimes those relationships are more important than their skill set. But on a big film, you have to have a very different frame of mind. Just as large crews make things go faster, experienced crews go faster still and solve problems with more efficiency. The more experienced the crew, the more likely it is they have seen a problem before and can fix it. That is hugely valuable. It's hard not surrounding yourself with friends, but at the top level, you have to surround yourself with the most experienced people you can find. They will save you later.

Many people think that one of their filmmaking virtues is they can multi-task. They are very proud that they do two or three jobs on a film; a director who is also a DP, a DP who is also a camera operator. Multi-tasking is almost always a bad idea. A person only doing one job has a much better chance of doing that one job well. When they are distracted by undertaking other jobs, it can all go wrong. For example, a director who is thinking about lights, because they are also the DP, may miss some nuance in a performance. A DP who is hefting a heavy camera during a hand-held sequence because they are also the camera operator may miss an ugly, unlit background. This principle extends to other jobs. Do you really want a focus puller thinking about anything but focus? A shot that is out of focus can't be fixed and will be lost forever or at least until the very expensive reshoots. If it’s a key shot, the whole sequence can be destroyed. For me, I want a crew of specialists. They are the ultimate insurance policy, and they make films better. Big films and major television shows cost a lot of money, so risks have to be reduced. When you have large experienced crews of specialists, it increases the likelihood of success. You will not only shoot faster, but you will shoot better. Showing off how many jobs you can do is sometimes more about ego than efficiency.

Follow these links to see his other work on this site.